Ready or Not; 5G is Coming (Video) 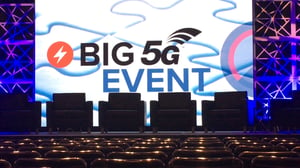 I attended the Big 5G event in Denver Colorado last week. The show was well attended, with every session I went to, including keynotes, having standing room only. That is probably a good indicator of the level of interest in and even to a certain degree the level of hype surrounding 5G.

The keynotes had representatives from major North American CSPs, including ATT, C-Spire, Sprint, T-Mobile, and Verizon (alphabetically). While there was plenty of “we were first in this 5G category” claims from two of these vendors and commentary about other countries' deployments that would lead you to believe this was a race, one of the speakers echoed a comment from a recent DARPA show that probably sums up the transition to 5G best, in that 5G is an evolution, not a race. Indeed, comments from the other major vendors stated that they did not want to release a 5G solution until they are ready, which they assured us they will be soon. In fact, CTIA stated there will be 92 5G deployments in 2019. Across all of IT, we have seen technology adoption accelerating, and 5G is no different, so expect the 5G adoption rate to be the fastest yet. ATT cited an example that a new deployment would typically be 18 mos, but for their first roll out, it was only six months.

Indeed, when most think of 5G rollouts, radio antennas come to mind, but there is a lot required to prepare for and extract the full value of 5G. Nicki Palmer from Verizon reminded the crowd that the first key technology enabler for 5G is more fiber, for the fronthaul, backhaul etc., to accommodate the dramatic increase in data across the 5G network. Next was the more obvious spectrum required (mid-band and mm wavelength), which in many parts of the world are still ongoing improvements. After that the focus turns to the core and the requirement for software-defined networking to enable a far more dynamic environment. And lastly was the need for multi-access edge compute. This last one is particularly important for real-time or near real-time applications. It also opens up the 5G ecosystem players.

The 5G ecosystem is rapidly growing as well and the Big 5G Event show floor was an indicator of this. Not only were some of the usual networking suspects like Adva, Cisco, Ericsson, Huawei, and Samsung present, but the exhibit hall also contained companies like Palo Alto Networks and Fortinet to talk about security; Guavas, NetScout, Sandvine, and SevOne for network management and service assurance; Pure Storage and Western Digital were talking about storage at the edge; Apis and Global Knowledge both highlighting training and education services, among many others including: Affirmed, F5, Intel, Oracle, and Pluribus (SDN).

Clearly, though the pressing thought on everyone’s mind was “How are the telcos going to monetize 5G?” the resounding answer, at least initially, will be with a focus on the enterprise. As I sat through the track for potential use cases, it was clear that for the near future, 5G services will be more focused on business applications. Looking at 4G, most would agree its killer app was video. Enabling consumers to stream video was huge. OTT companies like Netflix and YouTube have benefited from it tremendously and CSPs are actively acquiring content to capture that revenue stream. Many of the speakers at this event (and at other shows I have attended this spring) speculate that Augmented Reality or AR will be a driver for 5G. Actually, it was referred to as Mobile XR (XR= AR+VR) and its use cases spanned from the obvious gaming and entertainment industry, to augmented reality to aid in surgeries, accelerate problem resolution in manufacturing plants, even leveraging AR to detect allergens in products at the grocery store. Of course, there are many other uses like autonomous driving, last mile point to point bandwidth, modular robotic assembly lines, and even enabling untethered cameras for sporting events. Clearly 5G will also benefit consumers, but users shouldn’t think of these initial rollouts as the final product, but more like test beds to learn from and improve the technology and coverage. The estimates at the event indicated widespread 5G subscriptions (about 1 billion) by 2023.

At this early stage of the 5G Evolution, the best advice I can provide to enterprises and consumers is to get educated on 5G technology, work with your appropriate telecommunications providers to understand their plans for rolling out the technology in your area, and try to learn from the early adopters to accelerate your own deployment. There is no doubt 5G is coming, and its speed of adoption may eclipse 4G given the interest and hype surrounding it. Stay tuned for more information on enterprise use cases and the build-out of the ecosystem. Also check out my video blog on this topic below.