Red Hat Leading the (Open)Shift to the Cloud 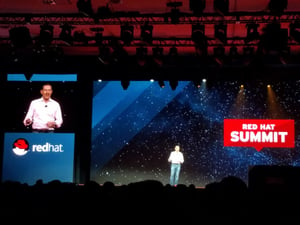 At their annual Red Hat Summit event, Red Hat laid out what they see in the future of cloud. Probably the most notable thing from the event was Red Hat's Jim Whitehurst saying in the keynote that no one company can solve all problems for customers. This is a fact for any one actually trying to solve problems in today's IT environments but it's refreshing for a company to lay this out and reinforce the reason companies need to work together. The future of computing, whether it be with products or leading an open source project, is with the community of users and the partnership of vendors. All vendors need to realize that the future of the IT industry, while still competitive, needs to be fundamentally cooperative to solve real customer problems. 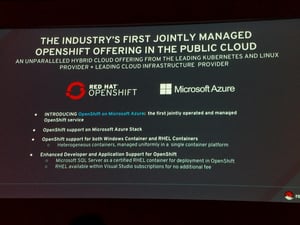 In the spirit of working with everyone, Red Hat put OpenShift front and center in their cloud positioning. Red Hat clearly understands the needs for a multi-cloud enabled app platform and that the capabilities of OpenShift, both with application and container management, are well positioned to solve those issues. To further their multi-cloud capabilities, Red Hat announced new partnerships with both Microsoft and IBM.  With IBM, Red Hat announced that all IBM middleware products, like DB2 and Websphere, are now available as Red Hat certified containers. This makes the modernization of applications that leverage these middleware services much easier.

With Microsoft, the big news is a new OpenShift managed service available on Microsoft Azure, managed and sold jointly by Microsoft and Red Hat. This gives a first party OpenShift service on Azure, dramatically lowering the barriers to using OpenShift applications on Azure. Both these deals expand the public cloud platforms that OpenShift can easily deploy applications to, furthering Red Hat's goals of making OpenShift a preferred application platform. I expect to see more announcements from Red Hat, other hyperscale public cloud providers, and from other platforms such as Cloud Foundry, as the discussion on cloud shifts from infrastructure to applications.