Redefining EMC at EMCWorld and the business of free

This week at EMC world, the message was about change and redefinition. At first glance, this could be seen as a retread of a very familiar story with all the necessary storage showcase event checkboxes marked off. Data is growing, check. Organizations are demanding new ways to handle data, check. Mentions of software-defined storage, the cloud, and the Internet of Things, check, check, and check. But… as the announcements continued—especially during the second day and beyond—there was a resounding sense that this time it was different. 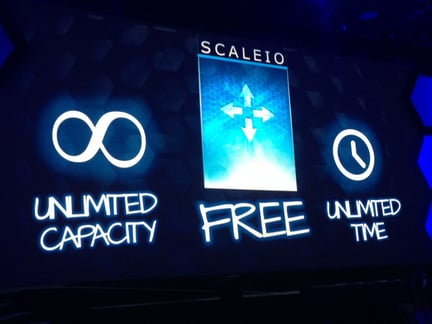 It is often said that you can judge someone not by what they say, but by their actions. This year, EMC actions were the news…

While there were announcements that fit the normal course of business, such as XtremeIO 4.0, there were others that marked—to some extent—uncharted territory for EMC, including:

While the ensuing conversation centered on the technology, there were a couple of takeaways that I thought were even more impactful.

A nuance that often gets overlooked is that the shift in the storage industry is not simply about a change in technology. Organizations are changing the way they desire to consume technology, as well. Waiting from four to six weeks for a new array is no longer acceptable. In this second golden age of application development, the cloud model of instant access to infrastructure is simply too enticing. Organizations are demanding flexible, easy, turnkey platforms for storage performance and capacity available on demand. EMC’s recent embrace with free storage software, open source control planes, and multiple hypervisors has as much or more to do with the flexibility organizations demand to consume technology as it does with the technology itself.

The second takeaway is that as much as companies, the press, or even analysts proclaim to predict the future, it is not written yet. And now may be the most uncertain time for storage technology that we have witnessed in the past 15 years. New technologies such as the cloud, software-defined storage, and converged all have tremendous support, but they also have detractors. EMC’s strategy is not just one of new technology, or just new deliver models for that technology, it is also one that combines those strategies to provide a breadth of technology and deliver options. EMC is quickly becoming poised to adapt to whichever way the industry evolves. And that level of adaptability might end up being the most valuable innovation of all.