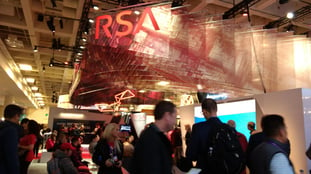 As the RSA Conference a friend and I repeated the exercise from last year's conference to evaluate the user interface of the security solutions shown on the exhibit floor.

What we saw last year was mostly horrible, with a few exceptions. Have things improved?  Does the raising of the bar based on good consumer user interfaces affect the way enterprise security solutions are designed? We were cautiously optimistic.

We were disappointed yet again.

I walked the floor with Ken Guzik, who has designed enterprise user interfaces throughout his career, including VMware vCenter. He knows what he's talking about and has an eye for recognizing the good, the bad, and really ugly in a few minutes of watching a demo and talking with the booth staff.  Ken wrote a blog on this too, titled: Enterprise UX – What’s so tough about creating a good user experience?

There are several rather simplistic ways we categorize user interfaces.

Most vendors choose the first two paths. It's not just laziness but as my friend said, it's a form of naïveté. "Not knowing what you don't know means you get something you think is good but misses the mark. "

A few people within booths even sheepishly admitted that their user interfaces are bad.  I just don't understand how they continue to get away with it. I suppose that some customers are so desperate to get some core security functionality that they tolerate a bad end-user experience.  Many just reek of bad design, or not understanding the end-user, or simply productizing an early prototype. Ultimately, the customers are letting them get away with it unless they speak up (or vote with their feet).

But they need to realize that a good user interface accomplishes many goals:

We did see a few good ones that stood out.

The rest were all over the board. Many used off-the-shelf visualization elements  that may look nice, but offered no real information. Instead, they just show data without context. Much of what we saw were tabular views and a few graphs. There was an unusual liking for chord diagrams (circles with arcs in the middle showing relationships).  They often provide for no functionality other than being just decorative. Just because you can show something fancy does not mean that you SHOULD, unless there's a good reason.

A few startups did have good UX. They probably invested in it, and made it a high priority. They know who they are.

What makes a development organization deliver good UX? They invest in true UX design, not just software developers who think they know UX. They also don't treat graphic artists as a substitute for real UX designers. They test, iterate, and refine. They talk to customers. They observe customers. They measure.

I won't name the bad ones. But they also probably know who they are. I give most of them at best a C minus grade or a D.  Please, please do something about it. People will appreciate your efforts. And your sales may go up as a result.