Symantec offering Better Backup for All

Today, Symantec held live events covering the upcoming BackupExec 2012 and NetBackup 7.5 releases. According to Symantec, "Backup is broken" (I tend to agree). And they intend to be the fix.

Enrique Salem, Symantec CEO, started by offering "Every year, I stand up and talk about how data is growing ... and every year we underestimate it." (which is oh so very true for most IT environments today)

The launch events were recently held at the Tesla Motor headquarters, with highlights shared in today's live webcasts along with new product demos and very active tweets. The Tesla event was impressive (no, I didn't get to drive one). But the theme of innovation was the right one, and they had some cool stuff to talk about on both product lines.

You can get some insight what the new technologies are and how they work at Symantec's new video launch site - http://www.betterbackupforall.com/. Kudos to the Symantec PMs and distinguished engineers on bringing some advanced functions not only to market but explaining them in a way that is meaningful and not just marketecture.

You'll see more from ESG on both products as they come to market, and am hoping that my buddies in the ESG Lab get a chance to get some deep hands-on time with both products. But in the meantime, the topline good stuff to me were: 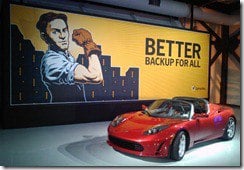 I was able to get a preview copy of BE 2012 and just started trying it out on my own home server - which might be a separate blog post later, along with other coverage by ESG as these products hit the street.

Until then, you can read more about what I saw and liked in a TechTarget article covering this week's announcements by Symantec.

As always, thanks for reading.