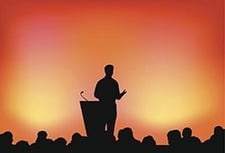 As expected, the 2016 RSA Conference was bigger than ever—more attendees, presentations, exhibitors, etc. Since I live in the cybersecurity space, there were few surprises, but there were a few major highlights to this year’s show.

Yes it’s nice to see that our little industry has grown up, but let’s remember that the RSA Conference's popularity is a function of just how dangerous the threat landscape has become. This reality should sober up the industry after its annual RSA party and subsequent hangover.