The Burden of E-discovery: Global Perspective

Time for a snapshot on how corporations are coping with e-discovery. As part of ESG's 2012 IT Spending Intentions Survey, we asked organizations to gauge the burden e-discovery activities place on their internal IT staffs.

Analyzed by size of IT budget, organizations spending at least $50 million were three times as likely as those spending less than $5 million annually on IT products and services to label e-discovery a significant burden (see chart below). This could be because the sheer size and complexity of large enterprise IT environments makes e-discovery burdens that much more difficult, even with purpose-built solutions in place to address these legal requirements. 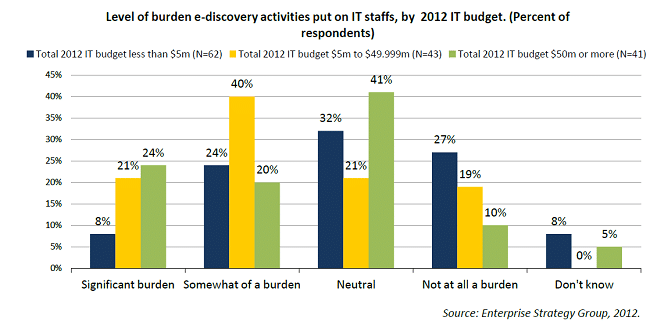 Interestingly, 41% of those with the largest IT budgets were neutral in their e-discovery burden assessment, which could reflect either a lack of litigation overall, or a dependency on outsourcing as a means of easing the burden on internal IT resources.

Most interesting is the geographic spread, which reveals that Western European organizations appear to be rivaling and-in some cases-even surpassing their more litigious North American peers.

While North American organizations were slightly more likely than their Western European peers to classify e-discovery as a significant burden (17% vs. 16%), overall, 48% of Europeans find e-discovery activities to be an operational burden compared with 45% of Americans. By way of comparison, only 21% of organizations in Asia-Pacific considered e-discovery any kind of a burden at all. 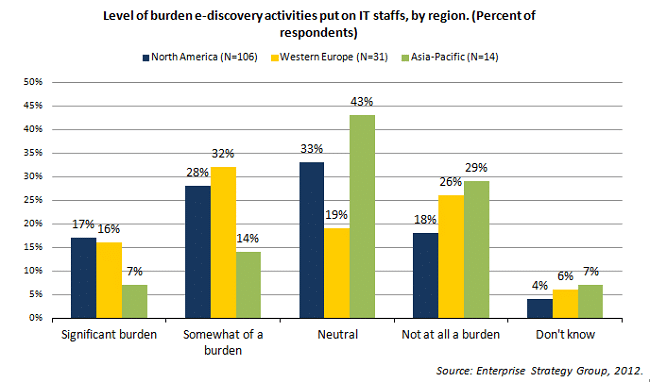 Western European respondents were also far less likely to see e-discovery as "neutral," which could reflect a growing legal or regulatory burden in Europe, particularly in conjunction with the U.K. Bribery Act and/or the E.U. financial crisis. Or, more simply, it could indicate that the North American standards of discovery are considered intrusively broad and burdensome by Europeans given the strictness of privacy regulations among European countries as well as the complications of cross-border international e-disclosure even within that continent.

For IT organizations, the pain of e-discovery continues to be represented all over the map (literally and figuratively), typically affecting larger organizations. Yet that map now seems to encompass more European companies, who, in some cases, are experiencing an even greater burden than organizations in the United States. This development could be due to increased regulatory scrutiny, litigation in the wake of the global financial crisis, or simply the growing impact of American litigation on global business. Whatever the reason, the impact is far-reaching: e-discovery (or e-disclosure, as it's called elsewhere), can no longer be labeled simply an "American" challenge.