The Cisco Chambers Challenge: Disrupt or be disrupted...

Legendary rock band, Aerosmith, closed Cisco Live! 2015 with a high energy performance at Petco Park in San Diego. One of the first numbers they played was “Livin’ On the Edge.” According to outgoing CEO, John Chambers, many businesses are going to be “living on the edge” in today’s digitized world. 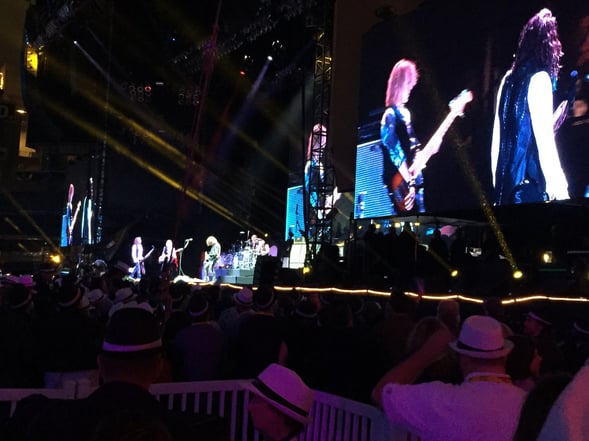 During his final keynote address as CEO, Chambers aptly pointed out that industry disruption is the new norm. And in this brave new world where the hunters often become the hunted, you can either embrace change and disrupt yourself, or be disrupted by someone else.

Some tacit examples include Amazon's disruption of both the retail and IT industries. And then of course, there’s the bane of  the municipal medallion monopoly cartel—Uber’s disruption of the taxi and limousine industry. Square, AirBnB, and LiquidSpace are several additional examples of how the phenomenon of digitization is creating new winners and losers across all industries at a breath-taking pace.

Chambers went on to say that he believes that new digital age companies will eventually consist of just two people: a CEO and a CIO.

In short, the mass democratization of IT has turned many traditional enterprise businesses on their heads, and while this is creating tremendous opportunities for virtually anyone with a unique and innovative idea, it’s also leaving in its wake the carcasses of formerly well entrenched, established businesses.

While Chambers admitted that it’s difficult for organizations that have “done the right thing” for a long time (like Cisco) to suddenly pivot away from what has made them successful, the cruel irony is if businesses don’t reinvent themselves, it’s highly likely they won’t be around for the long haul.

To reinforce the point, a panoramic slide served as a stark backdrop to the otherwise affable Chambers, with a dire prediction: 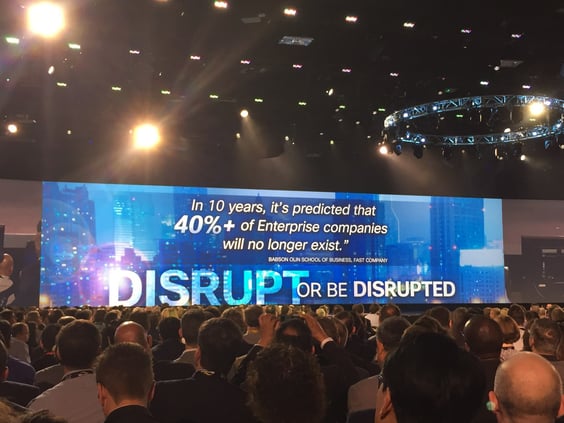 So what’s a potential antidote for being relegated to the digital dustbin of history? From an IT perspective, it’s a need for speed. Or as Chambers referred to it: Fast IT.

As I’ve discussed in past blogs, IT organizations need to morph from being the quartermasters of infrastructure resources to service centers. Or from stodgy and rigid Politburos, to nimble and efficient Service Bureaus that can provide fast access to resources on-demand—on-premises and across public cloud environments.

This where IT organizations need to disrupt themselves. The infrastructure paradigm of yesteryear where everything was managed and provisioned in discrete silos just doesn’t work in today’s world of IT instant gratification. In order to stay relevant, IT organizations need:

2. Cloud-like utility capabilities. AWS democratized IT through their self-service portal framework and it caught on like wild fire. Why? Fast IT. No need to wait for slow IT to respond—just swipe a credit card, and click your way to compute, storage and networking resources. The table stakes for winning back these shadow IT converts are the same self-service capabilities that drove them off the reservation in the first place. Perhaps one interesting approach is a hybrid cloud that can use any hypervisor, any cloud computing platform, and any cloud service provider to address a wide variety of requirements and end-user demands.

3. Flexible and open hybrid infrastructure. The term “open” can be a loaded word that at times can take on religious connotations. There are some who think the term should only apply to commodity hardware devices that operate on open-source software while others think it means an open “API” (application programming interface) that any ISV (independent software vendor) can write to.

The bottom line is that there is no free lunch (someone has to support all this stuff). But for the sake of brevity, an ideal approach is to have a hybrid approach where users can integrate proprietary hardware with an Open API and the option to integrate commodity devices where it makes sense.

Well as you might have guessed, Cisco has solutions that play into all three of these needs. Their Application Centric Infrastructure (ACI), for one, can drive significantly higher levels of automation into the network configuration and provisioning process. This can help mitigate network configuration errors (like ACL changes, DNS, Firewall updates, etc.) by removing the human element from the equation. It can also have the added benefit of freeing up busy network administrators so that they can focus on enhancing network QoS for hybrid cloud applications and/or helping to enable next generation applications like big data analytics and IoE (Internet of Everything).

And while Cisco may be a latecomer to the cloud infrastructure and services party, their Intercloud offering incorporates a totally open hybrid cloud computing approach whereby businesses can leverage their OpenStack cloud computing platform in combination with the Cisco cloud, partner clouds, or any of the brand-name cloud providers.

Lastly, from a software-defined networking (SDN) perspective, Cisco has enjoyed strong early adoption as well as an equal measure of scorn and suspicion across their user community. Many get hung up on the fact that their Application Policy Infrastructure Controller (APIC) can only be deployed with their Nexus 9000 switch.

And while this is a fair critique, it should be pointed out that Cisco has opened up their APIC API (acronym weary yet?) to a whole slew of ISVs. Giving users, for example, the option to deploy Cisco branded security services into their environment, or someone else's.

For those users who wish to go with an APIC solution that is disaggregated from the Nexus 9K, Cisco's APIC-EM (Enterprise Module), which is based on OpenFlow, can be deployed via an x86 server or virtual appliance.

The bottom line is that change can be hard but being disrupted by external forces is far worse. It could be the difference between living or dying on the edge.