The Impact of Server Refreshes on the Server and HCI Markets

As of late, the server market has been heating up. Companies like Dell, IBM, Cisco, Super Micro, and Huawei all saw growth in server shipments, while many saw double digit revenue growth year-over-year. So what’s driving the growth? Some argue it’s from the big web-scalers like Google, Microsoft, and Amazon, and to an extent, that is true. When the big guys do something, many follow suit, but I think the growth is also due in part to the mandate within many organizations to digitally transform by leveraging HCI.

Digital transformation is a key theme across so many organizations and HCI is one of the many pillars that falls under the digital transformation umbrella—quickly and easily delivering a cloud-like experience on-premises to make it easier to transition to and from the cloud (and across clouds for that matter). HCI has been around for about ten years now, and adoption continues to go up year-over-year. Every vendor I’ve spoken with touts amazing customer growth and every end-user I’ve spoken with has fantastic things to say about the simplicity, consolidation, and efficiency benefits. And with a core component of HCI being that they’re built on top of physical servers that contain both compute and/or storage, you can easily see the tie to the server market. Now based on the maturity of the technology and continued adoption, I think it’s fair to say a couple of things: hyperconverged has reached mainstream and we’re currently at a critical growth/adoption point. This is doubly good news for the server market.

I made a picture to visualize where I’m going with this. Time frame is on the X-axis, starting in 2008 when HCI emerged. While adoption was light early on as it always is in technology, over time, the market gained traction, represented by the blue almost exponential curve. After about 10 years (present), it is considered by some (me included) to be mainstream. The dark red box represents early adopters of HCI that need a server refresh. The light red box represents those that currently leverage a traditional 3-tier architecture, but are starting on the digital transformation journey and are currently in need of server refreshes. This group is looking to HCI to satisfy both needs in a single purchase to get a bigger bang for the buck. And just as a reminder, while this is theoretical, it’s applicable to numerous end-users I’ve spoken with in regard to server refreshes pushing HCI adoption. 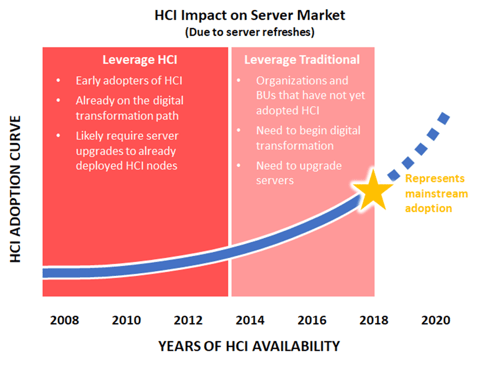 Put it all together and both the server and HCI markets will not be retreating after a solid year last year. Look for HCI to be a go-to for organizations starting down the digital transformation path and look for HCI adoption to continue to drive server market growth due in part to the simple need for server refreshes. Additionally, keep an eye on the server vendors in the HCI space, including Dell EMC, HPE, Cisco, Lenovo, IBM, and Super Micro, who either have their own HCI offering or have OEM partnerships with HCI software vendors like VMware and Nutanix.