The Need for Speed

At VMworld 2011, VMware announced that they had achieved a milestone - 1 million IOPS on a single vSphere 5 host with multiple VMs. To do that they used a traditional, spinning disk storage array with eight engines and 980 15K RPM Fibre Channel disks.

At VMworld 2012, they one-upped themselves - vSphere 5.1 achieved more than 1 million IOPS with a single VM. But this time, there were no spinning platters, because this feat of outstanding performance used a Violin Memory 6000 all-flash array. Why does that matter? In 2011 they needed enough space, power, and cooling to run 980 disks. In 2012, they only needed to run 2 x 3U devices. That’s like “Honey, I shrunk the storage!” You can read more about this on Violin's website.

ESG Lab recently tested the Violin 6000, and found it very easy to manage with some cool features. The Violin array scaled to 10,000 virtual desktops while maintaining great performance. But the real kicker was getting 1.35 million IOPS, with two Violin arrays and a ton of VMs, with response times under 1 millisecond – orders of magnitude faster than a power-hungry disk array with thousands of spinning disks and multi gigabytes of cache. 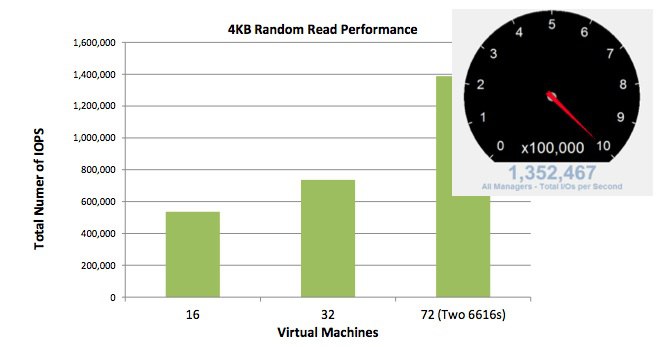 So if the Need for Speed is on your list, our ESG Lab Validation Report on the Violin Memory 6000 Series Flash Memory Array is worth a read.