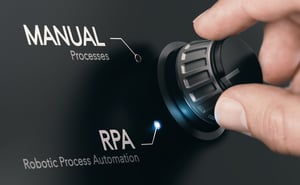 Over the last several months, automation has seen a jump in interest. Operational efficiency has been a top priority for years, but as of late, it’s an even greater priority. For businesses, tasks or processes that used to be viewed as manageable but inefficient are now being scrutinized. The inefficiency aspect is being amplified and organizations don’t have a choice but to act. And one of those actions is to look into a trendy buzzword that is proving to be so much more: robotic process automation (RPA).

So first off, what is it? RPA uses software and advanced technology like AI and ML to automate repetitive processes that are traditionally performed by a human. A software bot is configured to mimic structured actions to rapidly interact and transmit data based on established business workflows.

We, as humans, require breaks. We have defined working hours. And whether we want to admit it or not, we’re predisposed to make a mistake here or there. This is especially true when executing a repetitive task over and over again. All it takes is a fat-finger typo entering information from a submitted form to create a ripple effect that could be catastrophic to a business or a customer.

While RPA bots don’t sleep, don’t stop, and (when programmed properly) don’t make mistakes, it’s easy to get lost in the potential of RPA. It’s important to not lose sight of what RPA is and isn’t. RPA is not a physical robot. It doesn’t think freely. It doesn’t have cognitive abilities. RPA does enable predictability and reliability in the time it takes to complete a task or execute a workflow from beginning to end. RPA does save humans countless hours completing mundane tasks, enabling them to focus on more important tasks and projects. RPA does improve operational and business process efficiency.

So where are organizations today in their adoption of RPA? ESG research shows that nearly 1/3rd of respondents report their organization currently utilizes bots in production environments to help automate tasks. But what is interesting is that when looking at this data based on level of digital transformation maturity, it shines a spotlight on the continued separation of the more digitally transformed businesses over their less digitally transformed peers. ESG recently published a research brief that highlights some of these key findings. It can be found here.

For more RPA info, stay tuned over the coming weeks as I'll be doing a double click on the RPA market, as well as highlight best practices on how to get started.