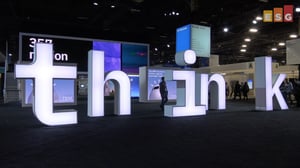 The month of March in the US signifies its eponymous “Madness” (it’s big college basketball tournaments for those of you reading from places it does not reach); perhaps to give a nod to that, IBM did a few things to create its own madness at its “Think” event in Las Vegas. There was the frustration type of madness with the registration system for a unified-and-therefore-very-big event…there was the amusing type of madness from seeing IBM execs trying to look comfortable in jeans…and there was the messing-with-our-minds type of madness from seeing a truly cohesive story, and event, and wondering if it actually was dear old IBM that we were witnessing!

Putting humor and minor frustrations aside, this was a very slick and well-orchestrated showcase by and for IBM. It started on a high, with a keynote from CEO Ginni Rometty – no PPT to speak of, no smoke and mirror Vegas stuff, just a quality speech and fascinating user stories – that was uplifting, compelling, and optimistic for IBM, for IT, for business, and indeed for society. I have seen a lot of keynotes – this was top-notch. So what, beyond cool technology capabilities, was the “hook”? There were really two parts to the key thesis: the power of data, and the opportunity for “incumbent disruptors” – that’s IBM of course and many of its clients – to be at the forefront since such established, big organizations have so much of the available data, which is key to the digital age and which therefore actually gives them a competitive advantage as long as they grab the opportunity.

Of course, all the main check-box items, words and phrases were touched on throughout the event, from A(I) to Z(mainframes)…going via cloud and ML and Watson and blockchain and Quantum computing etc. But the connection of everything – “man plus machine” to use IBM’s phrasing - was what was most compelling; and it was also convincing when one considers the shear breadth of what IBM had on display.

My colleague, Scott Sinclair and I pulled together this ESG On Location video at the event to give a little more commentary and tone.

Now, of course IBM has always had its capable technology fingers in many organizational pies. But a comprehensive portfolio does not guarantee commercial success; put another way, believing in IBM’s ability is not the same as IBM having re-established total believability. The connective tissue, if you will, is execution. IBM’s cohesive new story and re-imagined role as the flag-bearer for incumbent disruptors, will only translate to across-the-board commercial improvement if it can deliver as advertised and move beyond its current/traditional base; but this Vegas event (and, more importantly what it represented) make me think (pun intended!) that’s entirely possible.