Thoughts from VMworld, Day One 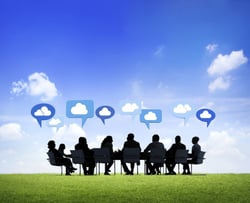 Our team of analysts in San Francisco offered their thoughts on the highlights of the first day of VMworld:

VMware’s hybrid cloud announcement includes some great enhancements in SRM and vCloud Air around Disaster-Recovery-as-a-Service (DRaaS). Take a look at my dedicated blog post on the why these enhancements are good for the broader data protection ecosystem.

VMware claims that there are more than 2,000 production implementations of EVO, putting them in the Hyperconverged Infrastructure (HCI) lead from a deployment perspective. To date, many industry observers have been skeptical about the rate of EVO adoption. This announcement, at least on the surface, seems to indicate that there is much broader adoption than previously thought. I will look to get some more details on where EVO is seeing success (ROBO, VDI, etc.) and which partners are having the most success selling EVO.

VMware states there are over 700 production deployments of NSX. While there are some impressive examples of VMware clients leveraging NSX to run massive computational workloads across hybrid cloud environments, VMware brass point out that 40% of users are adopting NSX to enhance security, while an additional 40% are utilizing it to automate network configuration tasks.

VMware's primary message is targeted at conditioning VMworld attendees on how to fulfill LOB and developer requirements. They are addressing the threat vector of traditional, cloud-native and mobile applications landing on a competing public cloud platform, such as Microsoft Azure, Amazon AWS and Google Compute Platform. In an effort to keep pace with the race to the cloud, VMware is:

From the storage side:

VMware is now offering VMware Validate Designs for several SDDC use cases. The next step is to finalize designs that are proven by experts that enable you to choose pieces that are tested, compatible and easy to upgrade.It results in a quicker way to realize value.

The tagline for the event is "Ready for Any". Apart from the troubling semantics, that is a good summary of the overall intent that VMware has to support "anytime, anyplace, anyhow" apps and IT. If that sounds a bit like there's no dramatic strategic shift then that's because there is not!

While that doesn't lead to the most hype-filled and excitement-packed event, it's actually very good for users. Imagine if VMware were, say, a transportation company, with a car strategy one year, spaceships the next and bicycles the year after. Constant strategic shifts can do more harm than good, especially when one is discussing such a core element of integrated IT. So the real interest and drama is mainly at a level down from some wild, but purely aspirational, new BHAG initiative.

If I turn to my major area of focus - storage - then, for example, VMware was clearer than ever that its 2000+ VSAN users are just a beachhead, with a direct intent to add the necessary scale and functionality to be offering a "genuine enterprise storage platform" in quarters rather than years. Indeed, that's a great example of how VMware is subsuming its raw VMs to be a "fabric" under - and supporting - a whole range of more valuable virtualization layers in the move to what it calls "one cloud".

VMware is taking an aggressive prescriptive stand on how to leverage containers. Docker today is about build, deploy, and run.  Note the word management is currently missing. VMware has appropriately seized on this and has made it a cornerstone of their lightweight Photon-based VM/Container strategy. This clearly gives VMware some running room in the short term while they determine how to craft a multi-container-per-VM solution.