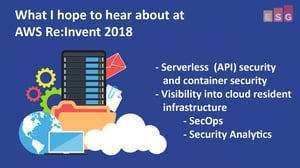 As a cybersecurity industry analyst, I am admittedly guilty of being myopic in looking for security to be the leading act in the keynote at major industry events. Such was the case at AWS re:Invents of the past when security was front and center starting with a discussion about the shared responsibility security model, the foundation of any cloud security program. That started to change in the last few years with security playing more of a supporting role in Andy Jassy's and Werner Vogels' keynotes. To be clear - it’s not that AWS is now being dismissive of security by any stretch, it’s simply that security is no longer an impediment to the adoption of public cloud platforms, at least those operated and secured by major CPS such as AWS, who has always treated security as job #1. AWS no longer needs to convince the market the cloud is secure, the conversation is now about how to meet your part of the shared responsibility model.

The focus for CISOs and security practitioners I speak with is now one of how to catch up with the growing amount of cloud services their organization is already using. That is, there is a readiness gap with respect to the degree to which organizations have already adopted cloud services and their ability to secure that usage. As mentioned, the requisite retooling starts with a clear understanding of the shared responsibility security model and spans the fundamentals of people, processes, and technology. But closing the gap will continue to be a game of catch up as AppDev teams embedded in the lines of business utilize new technologies such as a function-as-a-service (FaaS) as a cost-effective means to expedite the building and delivery of new code.

So, at this year’s AWS re:Invent I expect the “how” security conversation to reflect the macro trends of AppDev, the hybrid cloud complexion of the modern data center, and the opportunity IaaS platforms such as AWS offer to solve security challenges that require massive scale.

I was recently asked if AWS re:Invent is an event where cybersecurity is discussed. Given my expectation these will be some of the security themes at the event, the number of cybersecurity vendors who are participating, and already oversubscribed security-related breakout sessions, my answer was absolutely. See you in the congested hallways of re:Invent.

Check out the video for more of my expectations for the show.