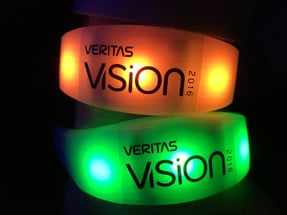 Safely removed from the loving embrace of Symantec, and with new owner Carlyle Group’s financial clout at the ready, Veritas held a “coming out” (pun probably intended) party at its recent Vision event.

Under the somewhat plain theme that “Information is Everything,” the event was fully focused on Veritas staking its claim – certainly its intent – to be(come) a data management platform. Before I make a few other points about the event, take a look at this video that has summary comments from my colleague Jason Buffington as well as me. And if you’d like additional insights from Jason (@JBuff) on the data protection angles of Veritas Vision, you can check out his vblog at http://bit.ly/jbESGvtas16a

It was perhaps fitting that the guest speaker for the main tent session was Nate Silver, the statistics and predictions guru. My guess that – before Vision – one could’ve gotten really good odds on the chances of all the following happening / being referenced at the event:

As I mentioned in the video, one of the key challenges for Veritas is that much of what it has to say – the constraints of the English language don’t help here – has been used by its competitors and the general statements could apply to anyone.....including those very vendors that Veritas wishes to differentiate itself from. However, with what was on show at Vision I think it would be a profligate person who would bet against Veritas – which has had Storage Foundation, an SDS product, for decades -  as it makes/extends/accelerates its transition to being an enterprise data management platform provider.
Topics: Storage