One of the more interesting announcements (to me) at VMworld this week was the introduction of vSphere Data Protection (VDP) within vSphere 5.1. Even though it is not branded within the UI, it is essentially EMC Avamar (lite) – and that is not a bad thing (for most people). 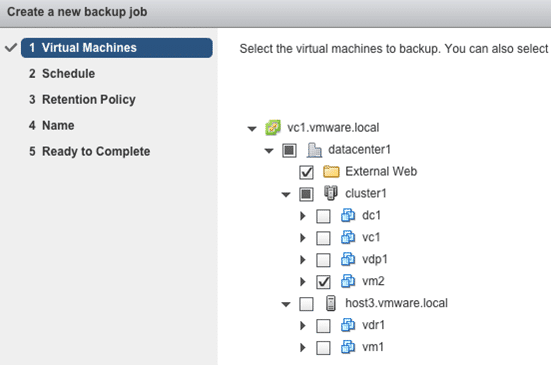 Within vSphere 5.1, all small-business customers now have a free, built-in backup solution. It is built within the VMware's new web UI and enables you to back up a VM in roughly five clicks, through a wizard that asks you:

That really is it. But be aware that simple does not directly equate to underpowered or immature. It's built out of current EMC Avamar (also recall that EMC is the parent company of VMware), so its technology is well-tried and supported. And while it isn’t the entire Avamar experience, it is far better than the earlier VCB mechanics or VDR built-in utilities. Perhaps most notable is that it is capped at 2TB of back‑end storage, which scopes it for SMBs over midmarket or enterprise environments. But for SMBs, I will remind you that 2TB of deduplicated storage can go a long way!

So, is this just a hook to upsell the full Avamar product?

No. In fact, you don’t even see “EMC” or “Avamar” branding within the VDP or vCenter UI’s. I was also surprised to find out that the virtualized VDP (Avamar) appliance is not able to replicate to a physical Avamar or Data Domain appliance. There are other vendors’ approaches out there where small (VM or physical) appliances run within a remote branch and then replicate to a large array at the datacenter, but that isn’t the play here (at least not yet); though it wouldn’t surprise me to see some better-together features with EMC Avamar or EMC Data Domain in future VDPs. But for now, VDP appears to be around VMware’s and EMC’s focus to ensure everyone sees continually incremental value in the vSphere platform. All week long, VMware has been touting how they listen and adapt (e.g., pricing changes) – and this gives them a more than “good enough” simple backup solution for small businesses that are adopting virtualization.

Does this signal the end of the third-party VMware-specific backup solutions?

No, but low-end SMB customers who are looking for “good enough” or economically priced solutions now have another choice, which will invariably lure some and distract others while they evaluate options. Most virtualization-specific solutions have a free offering, and “free” is usually hard to beat. But “free and built-in” is compelling not only on price, but also supportability and presumption of quality since it is built-in. For larger customers, the 2TB limit is a hard one, so VMware environments of any scale will likely outgrow VDP quickly as their primary solution -- though having it as an ad-hoc secondary solution in remote locations is still viable (similar to how some folks use the built-in Windows Backup feature).

VDP is a good thing for VMware customers who need a simple and straightforward backup solution, recognizing that you get what you pay for, there are limits around recovery-granularity, application-integration or hardware-synergy (the stuff that you pay for).

VDP is a good thing for VMware for demonstrating value on their platform, and removing one more potential objection for accelerating the adoption of virtualization in smaller environments.

VDP is also a good thing for EMC, showing VMware’s nod to Avamar as a credible solution – and yes, some folks will give Avamar a fresh look after learning that its technologies power VDP.

Perhaps the only folks who won’t be happy about VDP is the ecosystem of backup vendors who built their businesses, products or feature-sets around VMware backups (and perhaps some of their channel partners). Back when VMware customers struggled with backup and recovery (and it was an adoption blocker), new companies launched to solve the problem because VCB couldn’t. Later, many more backup companies adapted their approaches to ensure rich VMware-centric capabilities. Of course, those products still have many other differentiating features – but this feels somewhat like a slap-in-the-face from VMware to those backup vendors. Perhaps it’s just the next evolution in the commoditization of hypervisors. Perhaps VMware doesn’t feel as much affinity to their partners, since many of those backup vendors are adapting to the other hypervisors that are starting to gain mindshare or considerations for what will be a multi-hypervisor world.

Certainly, there are lots of things that VDP doesn’t do – compared with the full-sized Avamar or the wide range of virtualization-capable back-up solutions. But it is free, built-in, and powered by technology that understands VMware backups (including dedupe) and is supported by not only VMware but also EMC behind the scenes. And for some shops, that will be more than enough reason to try VDP.

As always, thanks for reading.