VMworld 2015 Had Some Great Marketing 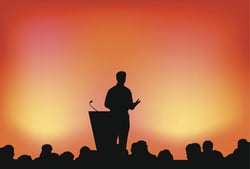 There was some great marketing execution at VMworld 2015.

As a sequel to my blog last year that “Event Marketing Doesn’t Get Enough Credit,” here is my tip of the hat to some of the unsung heroes of tradeshows: the events planners and marketing leaders that ensure that the technology experts and sales folks have compelling venues and leave a strong impression on the attendees, who are hyper-stimulated for four straight days.

There were five booths that really stood out to me as ‘effective’ – for different reasons, each with very different budgets and approaches. But each left an impression on me (as both an industry nut and as a former events dude); and I’m quite confident that they left that same positive impression on 100s or 1000s of passers-by:

With a rather small booth to one side, Axcient had one guy that wasn’t simply standing on his carpet ready to offer a spiel, but quite literally stopped me in the aisle, put his tablet in front of me and essentially asked “Can I show you how I can solve your IT availability issues in five mouse clicks?”

Having signage for nostalgic 8-bit gaming systems doesn’t hurt, but in reality, everyone has time to watch five clicks of a mouse. Those five clicks were so simple that I didn’t need PowerPoint slides beforehand or a pre-demo diagnostic introduction. But by the fourth click, I was at “Whoa, so you mean I could ______?” At that point, I or anyone else was going to spend a few minutes getting clarification on what else you could do in more than five clicks. This is a great example that if your UI team really has done its work well, the demo should sell the product more than the sales guy … and a little extra enthusiasm, instead of waiting for the opportunity to come to you, doesn’t hurt either.

SimpliVity’s booth essentially shouted “You know who we are and why we are here – so when you’re ready to have a serious discussion, we have folks ready to help you.” It was built for interaction, including an upper deck where the big talks could happen, while someone else helped you from literally every square yard of carpet.

For the second year in a row, Zerto’s marketing department made them look as big as any of the multi‑bazillion dollar top vendors, inspiring a confidence and presence that was really impressive. They also built upon last year's very clever wearable button stating “I am not a booth babe” that reminded folks that not every pretty face was hired just for collecting leads that week – it poked fun at the stereotypes and got lots of conversations started, many of which were even about data protection. Combine a big presence, with some clever giveaways, and arguably the best t-shirts at the show (fabric and design), and it shouldn’t surprise anyone that there was a literal red (shirted) army walking around the last day.

Yes, Commvault is a big player in the industry and their presence on the floor reflected their strength. Yes, their booth had lots of interaction stations, which were always full (as was a small theatre/meeting area). In fact, there were times, that it was an actual crowd, not just a small group of folks, that had been captured by the Commvault marketing machine. But the special nod is for when I walked by and saw a line wrapped around three sides of the booth before extending down the aisle – seemingly as long as a rollercoaster queue on a Saturday in July. I am still not sure what the lure was, but what was impressive is how the queue wrapped around the booth which was covered by large monitors, each showing some really clever videos on parts Commvault solution story.

Commvault has a broad story to tell and most folks won’t sit through a whole pitch at one time, but those attendees got some of the big picture nuggets – one monitor at a time, whose really smart videos assured folks that "you're in the right line." Candidly, the videos are a refreshing change from the staleness of most data protectoin marketing, so this bodes well for their bigger rebranding efforts. It’s one thing to build a booth that is efficient for large traffic – it’s another thing to build a booth that is effective in telling the company and product story. Commvault did both.

If you are going to come out of stealth and have a comparatively small booth, you are going to need something special to draw attendees. A fully decked out Delorean from Back to the Future does that!

I probably would have given away blu-ray trilogies over Lego sets; though I bet those Lego sets end up on an IT admin’s desk or bookshelf more often than in their kids’ hands, who don’t appreciate the nostalgia. Either way, that car did exactly what it was supposed to – draw curious folks into the booth so that the product could do the rest, assuming good staff.

The Tale of Two Parties

No “What was done well in marketing at VMworld” list would be complete without Veeam.

Veeam does it all; from an impressive and always busy booth, to crowded breakout sessions, to smart advertising placement within the conference venue, etc. Veeam absolutely knows how to stay in the forefront of attendees’ minds and create opportunities for dialogue throughout the week – but nowhere do they outshine their often competitors than at the Veeam party, which, at most VMworlds and TechEds, is “Le-gen-da-ry.”

As mentioned in last year’s blog, Veeam understands the recipe that maximizes the investment in a party: substance plus flair (not just flair). Like in past parties, Veeam enabled influencers, key customers, and executives to interact freely. The attendees had access to bars that weren’t congested and food that was simple, yet hearty. But what was most impactful is that even with the music, the distractions, and lots of green glowing things, you could absolutely have a conversation.

Contrast that with another behemoth party that I attended. The venue was hard to find, several blocks from the conference center. And then it wasn’t where it was supposed to be, so we walked some more. Even in the large venue, you couldn’t talk to the person next to you. In many cases, you couldn’t find the person you were looking for. And if you tried milling around to look for them, you would be squeezing through one crowded pocket after another. After 20 minutes of texting and phone tag, I met a colleague and we agreed to shake hands and reschedule the meeting. As a marketing professional in past lives, I would have to ask the question, “What kind of ROI do I get in either meaningful-engagement or perception-impact from an expensive event that no one can talk at?”

There is always a lot to do at an event like VMworld, even outside the event – and one side event, a transparent roadmap, pre-release preview, and vision briefing gets a special mention. Kudos to Zerto on not only a smart way to engage its community, but also for choosing a brilliant venue which assuredly increased its attendance = the Comic Art Museum.  Alongside original art from the past fifty years was a temporary exhibit of props from some of the latest Marvel movies. I confess that I may have picked up and held Captain America’s shield … and you would have, too.

What can we learn from this?

Know your audience. Some stereotypes are not true: not all female booth staff are ‘just’ hostesses. Some stereotypes are very true: many IT conference attendees will stop for a Delorean, or some nostalgia, or a game console, or a seriously legitimate t-shirt, if it’s either sporty/wicking or really soft – and many of us did read comic books (a few still do) and that is okay. If you make these hooks cool, and not insulting, you have provided a one minute distraction from a very overwhelming amount of technical jargon and marketing kool-aid. What you and your booth staff do with those sixty seconds is up to you.

P.S., the time to start planning your VMworld 2016 booth is now, unless you are headed to VMworld EMEA, then you get a break until December. And if you want more specific feedback on your event plan for next year, call me.