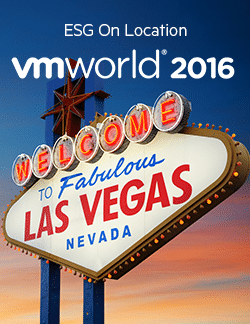 As the hours count down to the official coming together of Dell and EMC (and thus VMware), we could all be forgiven for overlooking the events of last week at the 2016 version of VMWorld. While I think it would be fair to say that there wasn’t a breathless enthusiasm from those covering the immediate news at the event – no cries of “hold the front [web] page!” -- there was nonetheless a lot of both content and intent whose impacts will be seen more gradually, but tellingly, over the coming years. While “VMEverywhere” is neither a product nor (as far as I know!?) an actual initiative at VMware, it was nonetheless the essence of what was discussed last week. There was some product, lots of principle, and – given the pervasiveness of VMware – a realistic possibility of success.

To get into some of the details – both about strategy and some key product areas – I and some of my ESG colleagues that attended the event give their succinct views in this short recap video.

Of course, as this “automagically orchestrated IT nirvana” rolls out (I’m being succinct, not cynical), there could be concerns about the implications in some quarters. To give a couple of examples about Dell/EMC/VMware’s desire to manage such concerns, it was notable that on many occasions in the main tent and breakout sessions there was mention made of how all this change would actually be good, not bad, for the careers of those folks represented in the audience. And, while not using the following phrasing, Michael Dell in essence asserted that he did not envisage the new Dell Technologies seeking to be a kind of King Canute of IT, attempting to hold back the waves of IT change, even as some waves of change might damage certain “product sandcastles” that are already built and contributing good revenue and margin. Of course the point of “VMEverywhere” is in the name – it means you can (or certainly intend to…) ride whatever waves there are, rather than trying to hold some back for short-term gain.

In just a day or two, as Dell and EMC come together, we will begin to see what manifests itself in practice.

Mark Peters: Welcome to Vegas once more and VMworld 2016. As ever when you've got 23,000 of your closest friends in one place, you've got all the razzmatazz, the parties, the glam and the not so glam. It's not all fun here. Of course, alongside all that that just goes with one of these big events, you've also got a lot of serious things happening. As is usual in these videos, I'm going to pass it to my colleagues to talk about some of the key takeaways they got from the tactical perspective, the strategic perspective, from the channel perspective and others. Just one thing before I pass over to them. Very interesting, the theme of the conference here was Be Tomorrow, as it happens. It's just fascinating because the Dell and EMC, or if you like Dell EMC VMware deal comes to fruition in just a few tomorrows from now. It'll be interesting what impact that has on everything that we've heard here this week. For now, over to my colleagues, and then I'll wrap the end of the video.

Dan Conde: Here at VMworld, we learned a new use case for VMware's NSX and network virtualization technology. In the past, micro segmentation was a good use case that enabled the enterprises to get security based on network virtualization. Now, we see a cross Cloud technology that allows you to bridge on premises workloads with workloads that are running inside public Clouds whether it's an IBM, whether it's an AWS or Azure. This is a way to extend a core technology to enable companies to get security as well as a way to bridge workloads running in a variety of places.

Mark Bowker: I've been coming to VMworld now for 11 years. I'll say one thing that really peaked my attention this year was how much of an industry show it's become. In the past, it was really just around VMware and aligned to its messaging, but now we see vendors from everywhere focusing on things anywhere from Cloud to mobility and all the pieces in between. From an attendee perspective, it's a great show to put on your list. From my coverage perspective from an end user computing, I'd say the battleground's really become identity. I think it's going to be interesting to watch closer what VMware's doing with identity, Microsoft, companies like Google [inaudible 00:02:53] Ping and others is really where we'll see the battleground going forward. I think we just started to see this at the show and will be looking forward to covering it more over the next coming year.

Jack Poller: I did a presentation earlier today with Dave Hitz and Dave Wright, the founders of NetApp and SolidFire. One of their comments from one of their customers was that storage is expensive, why would you want to buy it in advance of needing it. That's sort of a theme I'm seeing overall here at VMworld where all of these things are very expensive - storage, compute, networking and security. We're moving from a land where you buy in advance, you buy huge monolithic items, to a very fluid, very agile, very simple environment that's on the fly, scalability, programmability and overcomes the people and process issue that makes it difficult to get things going.

Kevin Rhone: Checking in from VMworld 2016 and the partner perspective. Yesterday's partner exchange was a rousing event and culminated with the solutions exchange at the end of the day which was rocking. This continues to be the leading event for partners that we see in the infrastructure world, and they were all there today. The vendors, the alliance partners, VARs, SIs, MSPs, and the show floor was full right up to the closing. There was another fact that really came out to me yesterday in the meetings, and that was the continued evolution of what defines the partner of the future. Those partners of the future are increasingly being defined by bringing products to market, adding them into total solutions, and now increasingly adding recurring revenue and Cloud solutions to their product mix. VMware made announcements specifically designed to encourage and reward those partners for selling advanced products at higher margins as bundled into total solutions. That's a continued trend that we'll see evolve even more into the future.

Mark Peters: Thanks to my colleagues. What did we find out at this event? What will VMware, if you like, be tomorrow? I think I found an interesting inverse relationship at this show. There was less razzmatazz from the main stage presentations and so on, but I think actually there was probably more underlying implied content and value. What do I mean by that? There were some glib but telling phrases used, things like consumer simple but enterprise secure. Sounds very compelling. You hear things like any app, any Cloud and any device, all those sorts of things. They roll off the tongue. Of course, there's a lot underneath them. Here I think is the compelling point. VMware when it started was really about making many things out of one. It's expanded that over the years. What they really enforced and defined here more than anything is that they by embracing heterogeneity and all these Clouds and all these different platforms are about making one thing out of many. That is going to be really interesting as we look to tomorrow, because Michael Dell may have bought him something that's a real jewel in the crown.