It was a big week for VMware, especially since it was coming on the heels of announcing two significant acquisitions of Pivotal and Carbon Black. Much of the news this year centered on the desire to embrace containers and manage hybrid and multi-cloud environments. Along those lines, the big announcements included:

From a network perspective, there was a lot to talk about as well. VMware started by highlighting the success of its network solutions (SD-WAN and NSX) with customers, now reaching the 13,000 mark and including 8 of the top 10 telcos and 88 of the Fortune 100 businesses, demonstrating significant growth from last year. Certainly, the VeloCloud acquisition has enabled rapid growth, but VMware also launched NSX-T earlier to drive hybrid and multi-cloud connectivity, which should be very attractive to customers as well.

VMware announced NSX-T version 2.5 that brought with it several enhancements including a new ability to ensure consistent policies across a hybrid cloud and streamline cloud deployments. This is well timed, as according to recent ESG research, the vast majority (70%) of organizations with modern container-based applications in production or planning to be in production favor hybrid cloud environments. In addition to making it easier to manage hybrid cloud environments, VMware also highlighted that NSX now provides a full networking stack via software with the addition of application delivery control capabilities (based on the AVI networks acquisition) to the existing switching, routing, service-defined firewall, service mesh, and SD-WAN capabilities. See image below: 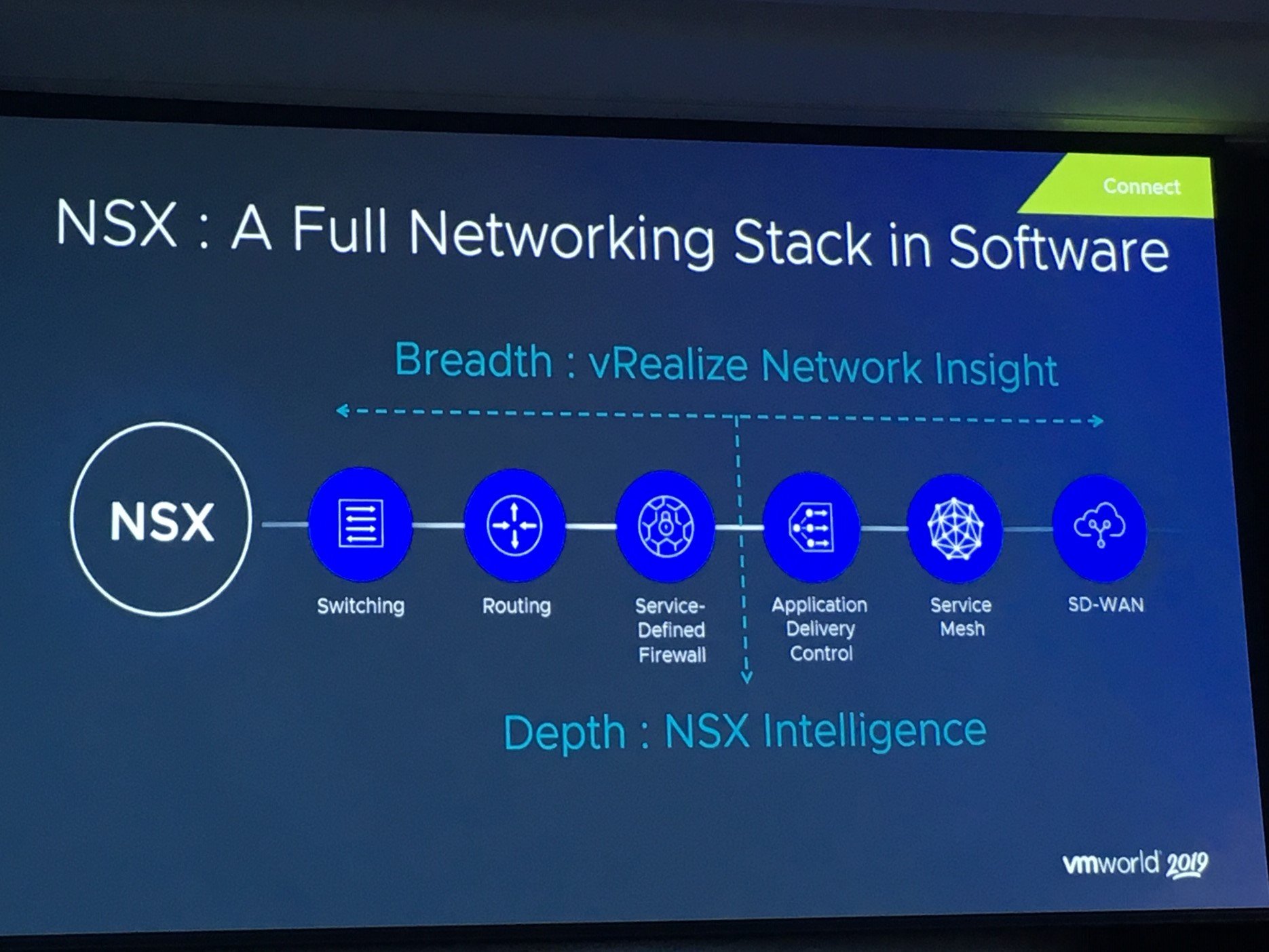 Another noticeable launch was NSX Intelligence – a distributed analytics engine built into the NSX hypervisor that will collect relevant metadata information to provide comprehensive visibility, gain deeper insights, and leverage those insights to develop automated security policy recommendations. Having continuous monitoring of the application flows should also expedite incident response and remediation. The information gathered in NSX Intelligence will feed in vRealize Network Insight as do the other solutions in the NSX networking stack.

On the Telco side, apart from highlighting the aforementioned relationships (8 of top 10), VMware discussed how the recently acquired Uhana technology and deep analytics capabilities will deliver much needed insights and intelligence as Telcos make the transition to 5G. The Uhana technology will feed into VMware’s Smart Assurance (previously Dell EMC Service Assurance Suite (SMARTS)). It is good to see VMware making investments in that software as the industry gears up for the impending 5G transition.

Other networking highlights included an example of Dell Technologies' “better together” strategy with Dell EMC declaring it was actively selling an OEM version of VMware SD-WAN by VeloCloud (announced at Dell Tech World), providing a significant go-to-market boost by leveraging the Dell EMC sales teams. In addition, there was also new technology announced, like the Dell EMC Smart Fabric Director, which was co-developed with VMware and provides insight into the Dell EMC underlay fabric up to NSX. This is important because organizations can have complete visibility between the underlay and overlay network. As a result of this tight integration, organizations can optimize network traffic and resources, all from existing VMware management solutions. Apparently, providing visibility between the underlay and overlay was a popular idea as both Apstra and Big Switch also announced integration capabilities with AOS 3.1 and E-VPC integration respectively.