What Makes a Good Backup Appliance - Part 2 of 3

In my earlier post about the characteristics of good backup appliances, I discussed the increasing usage rates of purpose-built backup appliances (PBBAs) by those organizations that embrace them. But after listening to several sessions at IBM Interconnect last week, including discussing our upcoming research report on data protection appliances (DPAs), I started thinking about, what makes up a good backup appliance over simply installing backup software onto a physical server?

Today, 37% of backup servers are physical backup servers with self-installed backup software as a do-it-yourself (DIY) solution, with the expectation that only 16% will be within two years, so it seems worth exploring what you should look for within a PBBA.

It is not about the Hardware

Software can only run as well as the underlying hardware will enable it, but the compute/storage in an appliance isn’t an overwhelming factor to determine between DIY servers and PBBAs. After all, you could buy the same Dell OEM, Intel white-box, Supermicro, or NetApp eSeries platform yourself – so while the quality and characteristics of the hardware absolutely matter for data protection, the hardware isn’t necessarily a determinant factor of whether to choose DIY vs PBBA.

It is not about the Backup Software

Almost, but not every, backup appliance vendor also sells the backup software separately, because most vendors originally developed the software and then later chose to deliver their software within an appliance form-factor. So, with a few exceptions, the backup software is not the determinant factor of whether to choose DIY vs PBBA.

Don’t make it about Ease-of-Installation

There is something absolutely wonderful about “out of the box and backing stuff up within an hour.” And while there are many good reasons to engage professional services or channel partner engineers, running SETUP.EXE should not be one of them. If the first day is devoted to simply getting the backup software to run on a clean piece of metal, you aren’t using a modern backup solution – switch now!

Some will call EOA ease-of-acquisition which is arguably the same thing, because architecting how much processor capacity, I/O bus (server choice), storage capacity, and capability are in a backup solution can be as much art as science. And no one knows the real-world performance requirements of the backup software as the vendor, so trust them to appropriately scale the appliance’s hardware components and ensure that the underlying OS and hardware drivers are the best combination possible to get the most of the backup software. Technically, you could read the best practice guides from the software vendor, scour their online forums/hangouts, etc., and then go purchase the same components that are in a backup appliance. EOA isn’t about the convenience of a shorter purchase order, it’s about the assurance that everything is sized to each other appropriately and will work well together.

DIY vs PBBA is really about Integration and Enablement

Which I’ll cover in part 3 of 3 of this blog series, with a “Good, Better, Best” set of criteria, later this week.  Until then, thanks for reading. 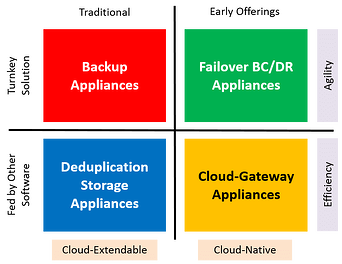