Why ExaGrid & Veeam are Rockin' VM Backup and Restore - and ROI

Let's face it, you built your data center for one reason: to generate revenue. The return on investment of your hardware, software, and people really depends on what you do with that infrastructure: Is it mostly used for production activities? Or is there a lot of time when users are stymied because there’s a backup running? How much time is spent on essential—but non-production—activities like data protection?

Backup is the first line of defense, and if you’re like most organizations, you do some kind of backup daily, weekly, and monthly. To get the most out of your infrastructure and IT staff, you want to spend as little time and effort as possible on backup, but still be ready to restore fast. To that end, a common practice is to do incremental backups daily, and then once a week or so roll those incremental changes up into a synthetic full backup. This gives you a full backup that’s easier to restore from, but taking less time out of production.

Long-time collaborators ExaGrid and Veeam make VM synthetic (and regular) full backups even faster by moving the Veeam Data Mover into the ExaGrid appliance. This ExaGrid-Veeam Accelerated Data Mover not only makes backups faster, but also shifts much of the burden of backup processing off of your production servers and into the appliance. 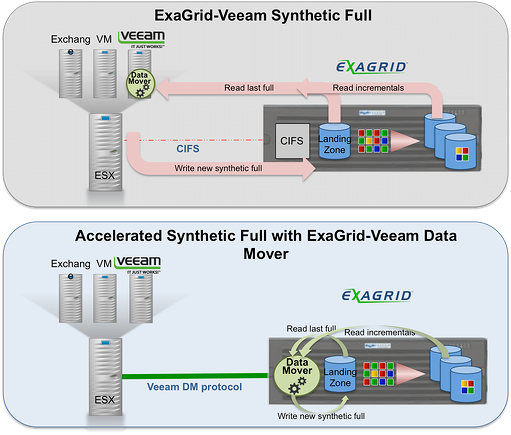 ExaGrid already has a leg up on the competition with its “landing zone” and Adaptive Deduplication—these let you get the huge capacity reduction benefits of deduplication, without having to give up truly instant restore. This latest feature adds to ExaGrid’s arsenal of efficiency benefits.

It’s telling that Veeam, truly a leader in VM data protection, has only done this advanced integration with three appliances, and the other two are from EMC and HP.

I’d say that puts ExaGrid at the forefront of VM backups, wouldn’t you? Read all about it in my latest ESG Lab Review.