In 399 BC the Greek philosopher, Socrates, was accused of corrupting the Athenian youth with his “dangerous” ideas. For this offense he was compelled to drink a death cup of hemlock. Likewise, Amazon’s infectious influence with IT professionals 35 and under may leave traditional vendors of IT yearning to administer a similiar poison pill to Jeff Bezos.

A recent ESG research survey revealed that AWS seems to be winning the hearts and minds of younger or “junior” level IT professionals at prophetic proportions. Case in point - of the 601 ESG survey respondents, those 35 and under ranked AWS as the #1 technology leader out of a choice of 14 major enterprise technology brands. By comparison, those in the 46 to 55 year old range group ranked AWS in 9th place while those 55 and over ranked AWS near the bottom (12th). 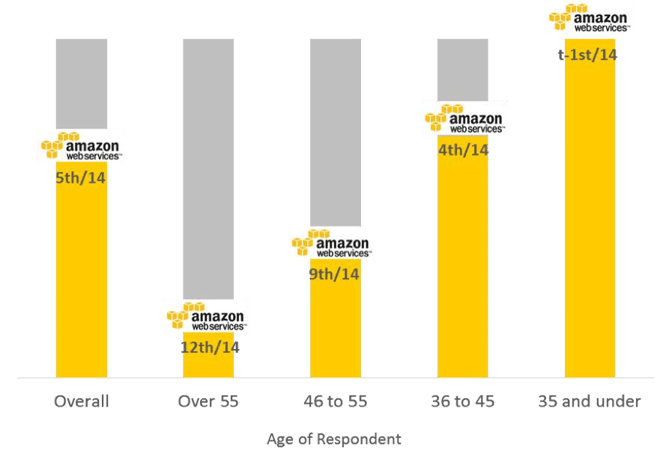 So what’s in the tea (or hemlock) leaves for legacy IT vendors? From a futures perspective, things could get pretty bleak. We’ve already seen some fairly dismal revenue reports get issued from several major IT companies but it could get a lot worse for some of these organizations.

While this trend should be concerning for traditional vendors, their demise at the hands of nouveau IT companies like Amazon is no fait accompli. AWS’ early success, while impressive, is still somewhat suspect.

Market share leadership is important but so is profitability. As one executive from a well known enterprise software company recently uttered at an industry event, …”they (AWS) get a hall pass on profitability numbers from Wall Street, but we don’t…." That may sound like sour grapes (or hemlock berries), but his point is well taken - the AWS/Wall St. honeymoon won’t last forever. A future run on Amazon shares could quickly erode faith in the long-term viability of the business and with that, their loyal youth following.

One of the other chinks in the AWS armor is their cash on hand position vis-a-vis their “old school” competitors. As of December 2014, Amazon had approximately $2B in free cash flow (FCF). On the other hand, IBM had over $13B in FCF while Microsoft had nearly $27B. Even an indirect cloud competitor, like EMC, had $5.5B of FCF.

This is important because in recent years, IBM vaulted themselves into a cloud leadership position by virtue of their $2B SoftLayer acquisition. Microsoft, on the other hand, has been investing heavily in their Azure cloud service offerings which has attracted a bevy of developers and clients to their well diversified IaaS, PaaS, and SaaS offerings. Likewise, EMC has remained very active on the cloud technology acquisition front, most recently acquiring Virtustream for $1.5B - a cloud infrastructure and services company that delivers cloud application and orchestration capabilities for enterprise workloads like SAP - an area of the market that is highly coveted by Amazon.

The bottom line is having less cash in the war chest potentially leaves AWS vulnerable to being outflanked on the cloud innovation front by their competitors, which could eventually siphon away marketshare from young and “mature" technology buyers alike.

For now, however, AWS’ popularity with IT millennials puts them on firm footing for maintaining cloud marketshare leadership now and potentially for the foreseeable future. To the extent that AWS can continue innovating, through financial headwinds, to maintain their loyal youth following, will be challenging. Success in doing so could spell their salvation while failure could deliver a bitter cup.