As part of my professional new year's resolution, I plan on blogging...a lot. I'll be blogging about anything I can get my hands on. First on the list is Windows Server 2012. I recently completed my first phase of Server 2012 testing focused primarily on the new and improved storage and networking features. More specifically, I played with Storage Spaces, the Server Message Block (SMB) 3.0 protocol, Deduplication (yes, it's part of the OS now), Chkdsk, and Offloaded Data Transfer (ODX).

Storage Spaces is awesome. By using an industry standard server with direct-attached storage (DAS) I was able to cost-effectively do everything I wanted, from provisioning to managing storage. I used easy-to-follow configuration wizards that made provisioning storage simple, while taking into account slightly more complex issues like resiliency and performance requirements. Then I added in a file server to take advantage of the improved SMB 3.0 protocol. I ran some performance tests with SQL Server 2012 and compared results, including metrics like local IOPS vs. remote IOPS. The results were quite impressive and can be found in the full report. 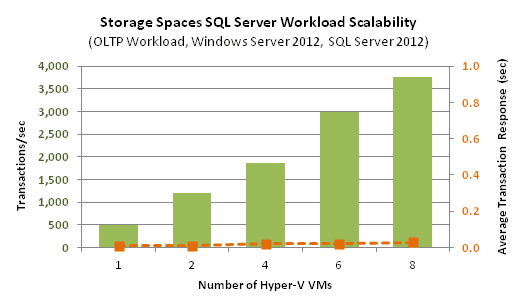 The new deduplication technology offered up great capacity savings of up to 98% and rehydration of deduplicated data was practically invisible to me. Chkdsk performance improved dramatically. With a new feature called Spotfixing, repairing complex drive failures took minutes, as opposed to how long it used to take in some cases…multiple days.

And finally I looked at the new ODX technology. I did a live VM migration (about 75GB) with and without ODX and monitored server and network resources, while keeping track of the time it took to complete. I knew ODX would yield a benefit, but I didn’t realize how significant the performance benefit would be. The migration completed 8 times faster than the traditional non-ODX method, while completely removing server and network resource consumption.

In general, buying or upgrading to Windows Server 2012 is a no brainer. It's cost-effective (with industry-standard servers and DAS), it's easy (configuration wizards), it’s fast (high-performing in all areas tested) and you don't have to be a SAN expert to deploy, configure, and manage it. My hat goes off to Microsoft on this one. It's arguably their biggest release of a foundational technology in quite a while, and I'm very impressed with everything it incorporates. The best part is that I just scratched the surface. I'm finishing up another report with more of a focus on Hyper-V, including VM scalability and density improvements. Stay tuned!

For more information about this validation check out the Microsoft blog...