Implementing a software-defined data center strategy is one of surveyed organizations’ three most-cited areas of data center modernization investment in 2019 according to ESG research.1 A significant part of this transition will include virtualizing the network using an overlay technology (such as VMware NSX) to run on top of an underlay physical network. While this combination provides flexibility and agility, a lack of visibility between the two layers means that organizations either overprovision the underlay network or risk configuration errors when deploying virtual networks. Without unified visibility across the two network layers, organizations rely on multiple management screens and extensive, error-prone manual correlation to ensure the underlying physical infrastructure has been configured correctly to support the desired virtual network. They may also overprovision virtual networks without knowing if sufficient networking capacity exists and create areas of network congestion. Given the pace of business and mandate to accelerate new products and services as part of digital transformation initiatives, organizations must have the appropriate level of network visibility to ensure that they can bring up new network services quickly and efficiently. 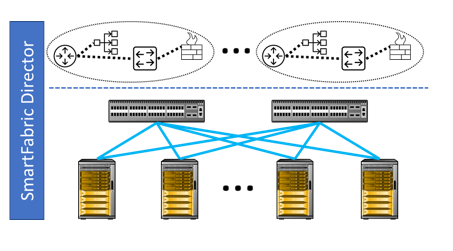 The Dell EMC SmartFabric Director is a network orchestration solution jointly developed with VMware that enables organizations to synchronize the deployment of a physical switch fabric with the virtual network and gain comprehensive visibility at both the physical and virtual network layers. Organizations can then potentially configure the network fabric in significantly less time than traditional methods. When integrating the SmartFabric Director with VMware vCenter or NSX/NSX-T, organizations can achieve end-to-end visibility of the physical network and all supported virtual overlays. To help organizations continuously monitor fabric health, SmartFabric employs telemetry to collect switch operational data and display metrics graphically at both the network fabric and switch levels.

Because SmartFabric Director provides this end-to-end visibility, organizations can verify that the network fabric is configured and operating as intended. Organizations can then assess where in both the physical and virtual layers to apply the appropriate policies to segment and secure the network quickly and easily, eliminating time-consuming manual efforts. Recognizing that organizations support multi-vendor networks, SmartFabric Director supports Google-developed gNMI and OpenConfig standards, reinforcing Dell EMC’s commitment to delivering open, simple, and efficient networking solutions.

ESG performed hands-on testing of the Dell EMC SmartFabric Director via remote demos. We used a test network consisting of two Dell EMC Z-Series Spine switches and four S-Series Leaf switches. Each leaf was redundantly wired to both spine switches. Overall, ESG was impressed by how the SmartFabric Director can simplify the deployment and management of the network fabric and provide complete visibility into the configuration of both physical and virtual layers.

While organizations continue to embrace software-defined networking to increase their business agility by simplifying the deployment of virtual networks, they remain challenged in not possessing full visibility of the underlying physical network and its correlation with the supported virtual overlays. Lacking this visibility can lead to time wasted on correcting mistakes encountered when attempting to deploy virtual networks, such as correcting network configuration errors or overprovisioning virtual overlays when the physical network capacity is insufficient. Organizations also lose the ability to apply the necessary policies to segment and secure both the physical and virtual network layers, increasing their risk exposure.

ESG was impressed with how the Dell EMC SmartFabric Director can help organizations to gain comprehensive visibility into the physical and virtual layers of their core networks and ensure that they are synchronized. We see how the SmartFabric Director can significantly ease the time-consuming process of creating and deploying an open, simple, and efficient network fabric, while simultaneously verifying it will operate as intended. Should you wish to facilitate a process that will minimize configuration errors and ensure that the physical layer can properly support the virtual overlay, we suggest looking closely at the Dell EMC SmartFabric Director.