While hybrid cloud computing sounds promising, it’s not so easy to accomplish. Many organizations want the option to run workloads in the cloud to handle spikes in demand, but to do that means renting compute and storage resources—where you pay for the storage even when it’s not in use—and it may take weeks or months to move applications and data. It means extra cost, security concerns, and application changes, plus it’s difficult to bring those workloads back on-premises. 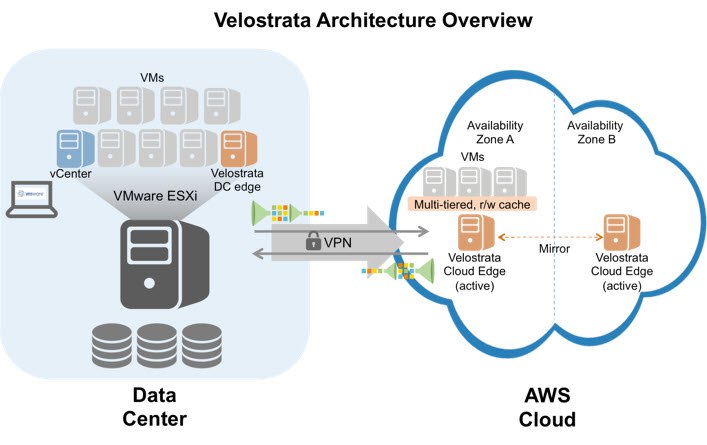 Velostrata software streams production workloads to the public cloud in minutes. It decouples compute from storage so adminstrators can move VMs to the cloud, leave the storage on-premises, and still maintain performance. Administrators make no changes to applications, images, networks, or storage. With the vSphere plug-in, they simply right-click on a VM, select “run in the cloud,” and Velostrata does the rest. Velostrata snapshots the VM, shuts it down, makes required operating system changes, handles network configuration, and streams the VM to the cloud in minutes. Using Velostrata caching, dedupe, and prefetch algorithms, the VM boots natively in the public cloud, and pre-fetches necessary data to run the workload—similar to a streaming video that starts playing before the entire file has been downloaded. Authoritative data stays on-premises, where it is protected. This unique approach enables support for data center extension and cloud migration use cases. After installation and a one-time network set up, administrators manage and monitor VMs from vCenter. Velostrata currently works with VMware vSphere in the data center and Amazon Web Services (AWS) for the public cloud, with additional hypervisor and cloud support on the horizon. A RESTful API enables integration with third-party cloud orchestration products.

The Velostrata architecture includes a Data Center Edge virtual appliance on-premises, and a dual-node Cloud Edge virtual appliance in a customer-owned AWS virtual private cloud (VPC), spanning AWS Availablity Zones. The data center and VPC are connected via VPN or DirectConnect, with encrypted traffic between them. Each Cloud Edge supports up to 50 concurrent VMs, and can scale out by adding Cloud Edge virtual appliances. Velostrata technology creates a multi-tiered, read-write cache; for reads, the cache includes data that workloads frequently access or are likely to access in the near future, enabling SAN-grade performance. Writes are acknowledged locally for low latency, and updates may be sent back on-premises asynchronously or configured to persist in the public cloud. Writes are mirrored across Availablity Zones, and a write journal is saved in an object store to ensure data resiliency. Bi-directional deduplication and compression reduce the amount of data moving across the WAN.

ESG Lab performed hands-on testing of Velostrata, moving a VM to the cloud while monitoring performance. 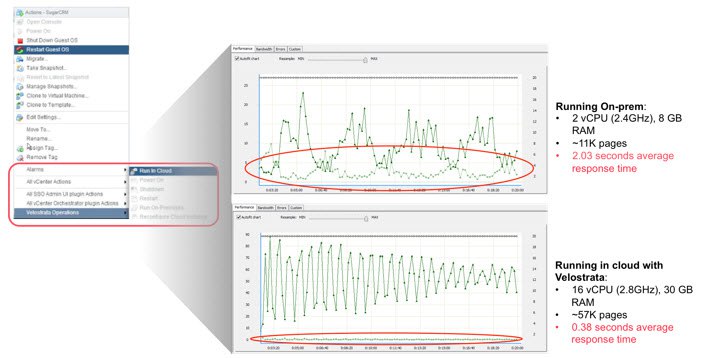 Move VM to Cloud in Minutes

Many data centers are overprovisioned to accommodate peak loads for existing applications and to provide capacity for new projects with variable loads. However, due to the inherent variability of business demands, those same data centers may also experience times when they are underprovisioned, negatively impacting application response time and availability. The promise of hybrid cloud computing has been the option to offload jobs during high utilization times, but that has not been the reality due to the cost, complexity, and migration time of moving compute and storage resources.

Velostrata enables that reality by decoupling compute from storage and leaving storage on-premises. This enables real-time, simple, fast “cloud-bursting” for CPU-limited workloads, with performance equal to or better than on-premises—and without costly data center overprovisioning or expensive, high performance cloud storage. Only recently out of stealth, Velostrata’s solution is just now being proven in the field, but ESG Lab’s first impression is that the performance claims for production workloads are real. We moved a VM to the cloud in about five minutes, requiring very little management, and demonstrated the ability to eliminate CPU performance bottlenecks by choosing a cloud instance with additional resources to boost performance.

[1] Source: ESG Research Report, The Cloud Computing Spectrum, from Private to Hybrid, to be published.

The goal of ESG Lab reports is to educate IT professionals about data center technology products for companies of all types and sizes. ESG Lab reports are not meant to replace the evaluation process that should be conducted before making purchasing decisions, but rather to provide insight into these emerging technologies. Our objective is to go over some of the more valuable feature/functions of products, show how they can be used to solve real customer problems and identify any areas needing improvement. ESG Lab’s expert third-party perspective is based on our own hands-on testing as well as on interviews with customers who use these products in production environments. This ESG Lab report was sponsored by Velostrata.