IT challenges are not always technical in nature, which is indeed the case when it comes to networking. In fact, organizations surveyed by ESG most often cited meeting budget constraints as a top challenge facing their networking teams (38%) (see Figure 1).[1] And it’s not just in networking; according to ESG’s 2016 IT Spending Intentions Survey, budget factors such as return on investment and reducing operational and capital expenses are important considerations for justifying investment across all of IT.[2] However, as borne out by the fact that providing network performance (27%) was also in the top five networking challenges, network quality and user satisfaction are still important, even while dealing with budget limitations.

Network function virtualization (NFV) is a network architecture concept that decouples network services from the hardware that delivers them to provide software implementation of network functions. In addition to standalone Virtualized Network Functions (VNFs) which can be installed directly into virtualized environments, KEMP offers a specialized NFV-enabled version of their operating system that allows them to host these instances and exploit the same x86_64 optimizations that they’ve implemented in their bare metal LoadMaster platform.

The KEMP architecture allows organizations to leverage a pool of x86_64 resources of their choosing that can be dynamically provisioned, scaled on demand, and integrated into service chains for a variety of use cases as a foundational building block of the agile, modern data center.

In this section of the report, ESG Lab explores the performance capabilities of the LoadMaster solution. Because generating network-specific workload traffic that stresses the maximum capabilities of an enterprise-class switch or controller is no easy task, we used a traffic simulator to push the LoadMaster solution to its limits. Ixia Networks Xcellon-Ultra hardware with the IxLoad software module was used to generate the simulated network traffic. Test results were captured from IxLoad reports as well as live snapshots from the LoadMaster user interface. The LoadMaster solution ran on a Dell R430 server with an Intel Xeon E5-2640 2.6 GHz processor, two 10GbE NICs, four GbE NICs, and up to 16 GB of memory as the hardware platform.

The tests performed in this report are used by most, if not all, load balancer vendors to test the performance of their solutions.

The first test evaluated the performance of the LoadMaster in an environment with a large number of simultaneous small web requests. Each user connecting to the web server generates one or more HTTP requests. To simulate this environment, we configured the Ixia to generate as many TCP connections as possible. Each TCP connection generated 100 HTTP requests, and transferred a 128byte file per request. This configuration generated as many HTTP requests as possible and maximized the CPU utilization on the LoadMaster. As shown by the red line in Figure 3, the LoadMaster peaked at more than 700,000 HTTP requests per second, and averaged almost 605,000 requests per second over the five-minute test.

Using the LoadMaster user interface, we determined that during this test, the LoadMaster was utilizing 100% of the CPU. To scale the LoadMaster to handle more simultaneous connections, an administrator could install an additional CPU, or upgrade to a faster CPU.

Next, we evaluated the performance of the LoadMaster in an environment where the web servers must handle a large number of simultaneous users using encrypted communication. Each user connecting to the web server generates one or more encrypted HTTP requests using SSL. To simulate this environment, we configured the Ixia to generate a single HTTPS transaction per TCP connection, using TLS 1.0. This configuration generated as many HTTPS requests as possible, and we observed how many SSL transactions the LoadMaster could process per second with this server configuration.

Because the LoadMaster CPU handles all encryption, and encryption places heavy demands on the CPU, the number of SSL requests is directly dependent on the number and power of the CPUs installed in the system. As shown by the red line in Figure 4, the LoadMaster peaked at more than 4,800 SSL requests per second, and averaged more than 3,000 requests per second over the five-minute test. All SSL testing was based on 2KB key usage; testing with smaller keys would have yielded higher performance—e.g., with 1KB keys the Loadmaster should have been able to process double the number of SSL requests.

In many environments, web servers must transfer large amounts of data—for example, web servers hosting files for download, or streaming video. To test the LoadMaster performance in a large data transfer environment, ESG Lab configured the Ixia to generate as many TCP connections as possible. Each TCP connection generated 100 HTTP requests, and transferred a 512KB byte file per request, maximizing the amount of data transferred.

The blue line in the Ixia results graph at the top right of Figure 5shows that the LoadMaster sustained between ten and 12 Gigabytes per second of data throughput. The LoadMaster user interface reported that each Ethernet interface was transferring data at almost 100% of its maximum. During the test, the CPU was just 13% idle, and the system consumed less than 4% of available memory. These results indicate that the LoadMaster is network interface bound and still has resources available to process traffic. An organization could add another pair of NICs to provide more network bandwidth.

Lastly, the Lab explored the simultaneous connection scalability of the LoadMaster solution. To place a load on the system, we configured the Ixia to open as many layer 7 (L7) TCP connections as possible, making one HTTP request for each connection. The Ixia then maintained the open TCP connection. Each concurrent open connection consumes LoadMaster memory. We tested the LoadMaster with four, eight, and 16 GB of memory. As shown in Figure 6, the number of concurrent open connections processed by the LoadMaster scaled linearly with each doubling of the amount of LoadMaster system memory. Since customers are often interested in taking advantage of the application traffic optimizations that an application delivery controller can provide when operating at L7, L7 connections were used in the representative tests as opposed to L4. Additionally, L4 connections typically have a smaller footprint than L7 and would not reflect real-world deployment scenarios.

ESG asked organizations to name the biggest challenges facing their networking team in 2016. Meeting budget constraints was the most-cited response (38%), with providing network performance (27%) not far behind.[3] Solving these two challenges at the same time seems like an unreasonable expectation, so arming IT with a solution that could help address both would be advantageous to the business.

ESG Lab validated that the LoadMaster Operating System for Bare Metal solution from KEMP can help customers improve their network efficiency and performance with extraordinary cost efficiency. ESG confirmed the ability of Loadmaster OS to efficiently handle and route hundreds of thousands of HTTP and thousands of secure HTTP transactions on industry-standard server hardware. ESG Lab also validated the ability of the solution to be inexpensively and easily scaled in any dimension—CPU, network, or memory—to handle growth.

First, the price/performance based on cost per Gbps of throughput was examined, which measures the cost of the ability to transfer data between users and application servers. As shown in Figure 7, all three KEMP LoadMaster solutions delivered virtually identical dollars per Gbps, reflecting the linear price/performance scalability of the solution. The best result from the market-leading vendor was 3.7 times costlier per Gbps of throughput than the KEMP solutions.

Next, ESG Lab compared the price/performance based on cost per HTTP L7 requests per second, which measures the cost of the ability to handle simultaneous requests. All three KEMP LoadMaster solutions again delivered virtually identical price/performance, as shown in Figure 8, reflecting the linear price/performance scalability of the solution. The best result from the market-leading vendor was 3.6 times costlier per transactions/second than the KEMP solutions.

We also performed the same comparison for encrypted (SSL) requests per second. Encryption demands extremely high performance from the system processor. Upgrading the CPU or adding additional CPUs to the KEMP LoadMaster solution provides significant price/performance benefits, and this is reflected in the results shown in Figure 9. Upgrading from a Xeon E3 to a Xeon E5 gave a 1.4 times price/performance advantage. Adding a second Xeon E5 processor gave an additional 1.9 times price/performance advantage. The best result from the market-leading vendor was 1.7 times costlier per encrypted transactions/second than the costliest KEMP solution.

As the number of internal and external applications grows, requiring investments in supporting infrastructure, IT is still hearing the mantra “do more with less.” ESG’s 2016 IT Spending Intentions Survey revealed that cost reduction initiatives ranked second (behind increasing cybersecurity) in the top ten most frequently cited 2016 business initiatives driving technology spending.[5] This is especially true for application load balancers, where the goal is to optimize the use of available resources.

As previously noted, ESG found that meeting budget constraints was the most cited challenge facing networking teams in 2016 (38%).[6] Combined with budget factors such as return on investment and reducing operational and capital expenses being reported as important considerations for justifying investment across IT, it’s clear that getting more bang for the buck is an overarching theme for networking teams and IT in general.[7]

KEMP Technologies has a strong focus on delivering its Application Delivery Controller capabilities through its software offerings, and since it runs on a variety of platforms—including bare metal OS, virtual machines, hardware, and cloud- based—KEMP offers its customers a wide range of choices in scalability and deployment options. KEMP’s mature software base was designed from the ground up to provide a common, stable foundation, and users can adjust the underlying platform to meet a variety of requirements. The KEMP architecture allows organizations to leverage a pool of optimized x86_64 resources—of their choosing—for a variety of use cases, whether traditionally deployed or in an NFV architecture.

While the KEMP LoadMaster Operating System (LMOS) is supported on most x86_64 platforms that also support Linux OS, several major server vendor manufacturers have certified the KEMP LMOS as a fully supported OS and will honor their warranty and support agreements.  These vendors include Cisco UCS—B and C series, Dell, HP, Oracle Sun x86_64, and Fujitsu. KEMP disclosed to ESG Lab that more vendor certifications are in process. Because there is no abstraction layer between the hardware and the bootable KEMP OS, organizations can move LoadMaster licenses to higher performing server hardware as needed.

KEMP LoadMaster for Bare Metal enables organizations that have standardized on specific server platforms to leverage the common hardware that they already use. Organizations looking to reduce costs while optimizing the performance of their Application Delivery Controller infrastructure would be smart to take a close look at KEMP LoadMaster for Bare Metal.

Technical specifications of the load balancers used for the price/performance comparison are summarized in Table 4. 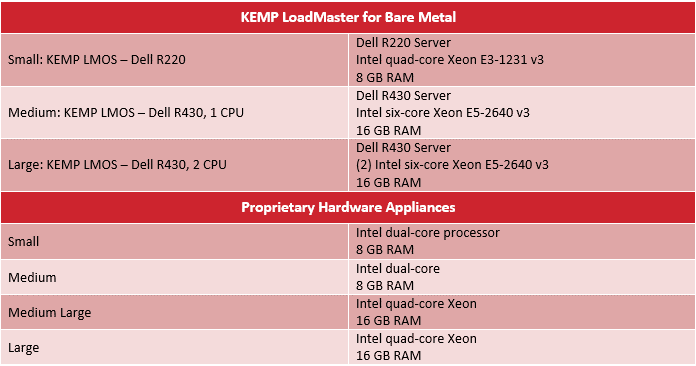 Total cost analyses of the load balancers used for the price/performance comparison are summarized in Table 5. Costing included three-year premium support for both the hardware and the software.

The goal of ESG Lab reports is to educate IT professionals about data center technology products for companies of all types and sizes. ESG Lab reports are not meant to replace the evaluation process that should be conducted before making purchasing decisions, but rather to provide insight into these emerging technologies. Our objective is to go over some of the more valuable feature/functions of products, show how they can be used to solve real customer problems and identify any areas needing improvement. ESG Lab’s expert third-party perspective is based on our own hands-on testing as well as on interviews with customers who use these products in production environments. This ESG Lab report was sponsored by KEMP Technologies.

[4] Complete technical specifications and total cost analyses are provided in the Appendix.