Note for 2018 updates made to this report: Test results remain unchanged from the original 2017 report, but some features described in the HyperFlex section have been updated to reflect the current feature set included in the HX 3.0 release.

Organizations today must be extremely flexible, with the ability to add applications and virtual machines (VMs) quickly to handle the speed of business. This is extremely difficult to achieve with silos of compute, network, and storage gear that are static and require individual management. This is one reason for the popularity of hyperconverged infrastructure (HCI). HCI offers a single, centrally managed unit with software-defined compute, network, and storage that is flexible, scalable, and easy to deploy. 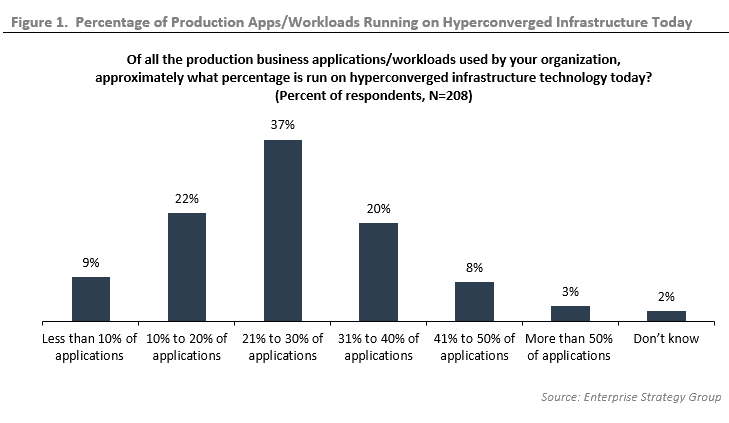 As these numbers increase, they bring with them challenges, and performance still sits near the top of the list. Simplicity is no longer the only priority; as more HCI solutions have come to market, the key buying criteria have expanded to include performance. Many solutions still cannot deliver the consistent high performance that mission-critical workloads demand.

Cisco HyperFlex is a complete hyperconverged system that combines compute, network, and storage in a fully integrated, fully engineered platform designed to scale resources independently and deliver consistent high performance. Cisco HyperFlex is engineered on Cisco UCS, combining the benefits of the UCS platform (such as policy-based automation for servers and networking) with those of the HX Data Platform’s distributed filesystem for hyperconvergence.

It supports edge-to-edge workloads from mission-critical core data center applications to remote locations. The latest update adds support for Microsoft Hyper-V in addition to VMware ESXi along with support for bare metal, multi-cloud, and containerized environments. HyperFlex deployments require a minimum three-node cluster for high availability, with data replicated across at least two nodes, and a third node to protect against single-node failure. 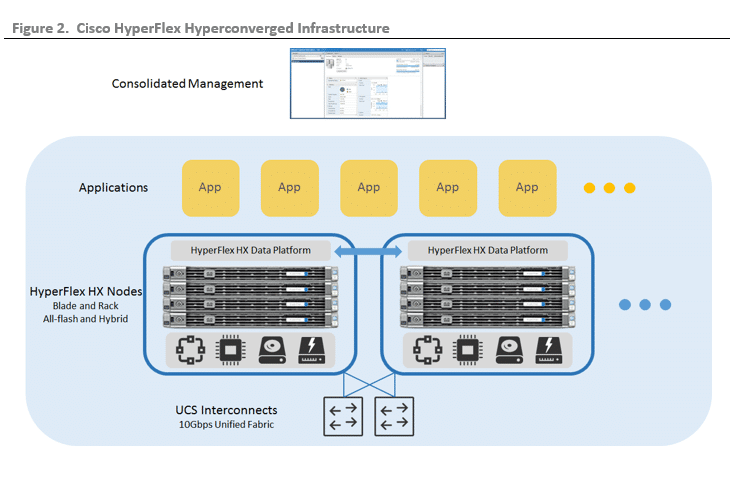 HyperFlex HX-Series Nodes are powered by the latest generation of Intel Xeon processors, and comprise:

Testing was conducted using industry-standard tools and methodologies and was focused on HyperFlex hybrid and all-flash performance with comparisons to unnamed alternative solutions. These solutions included two “software-only” systems from leading vendors that leveraged standard x86-based servers, and a proprietary system from a single vendor based on its own hardware and partially integrated with its own software.

This extensive testing was executed using a stringent methodology including many months of baselining and iterative testing. While it is often easier to generate good performance numbers with a short test, benchmarks were run for long periods of time to observe performance as it would occur in a customer’s environment. In addition, tests were run many times, never back to back but separated by hours and days, and the results were averaged. These efforts add credibility by reducing the chances that results were influenced by chance circumstances. Also, testing was conducted using data sets large enough to ensure that data did not remain in cache but leveraged the back-end disk across each cluster. 3

Testing of hybrid solutions included both SSD and HDD. The hybrid test bed included a four-node HyperFlex HX220c cluster with one 480GB SSD for cache and six 1.2TB SAS HDDs for capacity. Tests were run with 140 VMs (35 VMs per node), each with 4 vCPUs, 4 GB RAM, and one 20GB disk, and running RHEL version 7.2. The working set size was 2.8 TB. Tests were run for a minimum of one hour, with a five-minute ramp-up before each test and a minimum one-hour cool-down between tests.

First, ESG Lab looked at overall cluster scalability. The test began with a synthetic workload designed to emulate a typical OLTP I/O mix, 70% read, 100% random with a per-VM target of 800 IOPS. The test was run across 140 VMs in each cluster for three to four hours with a goal of remaining at or below 5ms write latency. As shown in Figure 3, HyperFlex was the only platform to complete this test with 140 VMs and stay below 5ms (4.95ms). For each of the other clusters, the test was rerun against decreasing numbers of virtual machines until write latency of 5ms was achieved. Vendor A successfully supported 70 VMs at 4.65ms average response time, Vendor B passed running 36 VMs with 5.37ms average response times, and Vendor C supported 48 VMs at sub 5.02ms response times.

Next, ESG Lab examined the same synthetic workload against 140 virtual machines to measure the latency of each cluster against IOPS. As seen in Figure 4, the Cisco HyperFlex cluster more than doubled the IOPS of vendor A and supported nearly eight times the IOPS of Vendor B and Vendor C with an average response time of 2.46ms. In comparison, Vendor A’s average response time was 6.61 ms, Vendor B’s was 21.88ms, and Vendor C’s was the highest, at 44.45ms.

Next, ESG Lab looked at a synthetic workload designed to simulate SQL Server I/O patterns.4 Vdbench was used to create a synthetic workload that exercised different transfer sizes and read/write ratios. In the Vdbench profile, the deduplication ratio was set to two with a unit size of 4 KB and the compressibility ratio also set to two. Again, the test was run with 140 virtual machines. 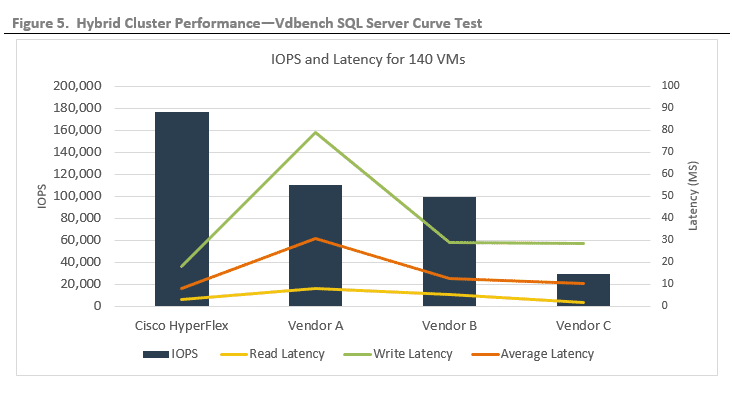 Testing again used 140 VMs per cluster (35 per node). Each VM, running RHEL 7.2, leveraged four vCPUs, 4 GB RAM, a 16GB local disk, and one 40GB raw disk. The working set was 5.6 TB, and I/O was 100% random; tests were run with a five-minute warmup, a one-hour test run, and a one-hour cluster cool-down between tests. While deduplication and compression are always enabled on the Cisco HyperFlex cluster, tests were run against Vendor B with deduplication and compression set to 50%, and again with both disabled. As shown in Figure 6, the Cisco HyperFlex cluster supported more IOPS at lower latency than Vendor B with or without deduplication enabled.

Next, ESG Lab looked at a synthetic workload designed to simulate SQL Server I/O against all-flash configurations of Cisco HyperFlex and Vendor B. Vdbench was used to create a workload that exercised different transfer sizes and read/write ratios. In the Vdbench profile, the deduplication ratio was set to two with a unit size of 4 KB and the compressibility ratio also set to two.

An interesting observation was made during all-flash testing. Vendor B showed considerable variability in performance from VM to VM. This test was run using HCIBench against 140 VMs in each cluster. While Cisco HyperFlex showed little variation across all 140 VMs—IOPS stayed very close to 600—Vendor B’s IOPS varied wildly, from a low of 64 to a high of 1,024 IOPS.

It’s important to note that this variability was observed in every iteration of testing, and that no form of storage QoS was used during these test runs on either of the clusters. Network QoS was used for both systems. Inconsistency like this could be quite problematic for administrators, who would likely need to use some form of QoS (if available from the HCI vendor) to attempt to control the VMs that are consuming more than their share, so others are not starved.

A common complaint about HCI systems has been performance. HCI customers have been more focused on cost-efficiency and simpler management, often relegating HCI to tier-2 workloads. IT departments are unlikely to saddle their tier-1 production applications with high latency and inconsistent, “noisy neighbor” VM performance that some HCI solutions offer.

ESG Lab validated that Cisco HyperFlex hybrid and all-flash systems delivered higher, more consistent performance than other similarly configured HCI solutions using simulated OLTP and SQL workloads. For hybrid clusters, HyperFlex not only consistently outpaced competitors in terms of IOPS and latency, but it also supported more than twice the number of VMs than both software-based and engineered proprietary systems while maintaining high performance.

The HyperFlex all-flash cluster, with always-on deduplication and compression, delivered higher IOPS and lower latency than a competitor with and without data reduction turned on. Equally important, HyperFlex all-flash performance was consistent across all VMs in the cluster, eliminating the need for storage QoS to ensure user satisfaction. In contrast, individual VMs in the competitive cluster received widely varying IOPS, indicating significantly better performance for some VMs than others.

Hyperconverged infrastructures, while becoming mainstream, have long been considered more appropriate for tier-2 workloads. When asked in 2016 why they would choose converged infrastructure over hyperconverged, ESG research survey respondents’ most-often-cited (54%) response was better performance. In addition, 32% of respondents believed converged, i.e., loosely integrated independent components packaged together, was better for mission-critical workloads.5

Fast forward to 2018, and the picture has shifted, with only 24% of respondents citing performance as a reason to choose converged, while just 22% believe converged is better suited to tier-1 workloads.6

Cisco—clearly an “established player”—has an answer to those deficiencies. HyperFlex provides the typical benefits of HCI—it is cost-effective, simple to manage, and lets organizations start small and scale. But it also provides the performance that mission-critical, virtualized workloads demand. The consistency of performance over time and across all VMs in a cluster was particularly notable. In addition, its independent resource scalability enables organizations to adapt quickly to changing requirements, as today’s environments demand.

The test results presented in this report are based on applications and benchmarks deployed in a controlled environment with industry-standard testing tools. Due to the many variables in each production data center environment, capacity planning and testing in your own environment are recommended. While the methodology in these tests was more stringent than most, customers are well advised to always explore the details behind any vendor testing to understand the relevance to your environment.

When market evolution changes the buying criteria in an industry, there is often a mismatch between what customers want and what they can get. Vendors that can see what’s missing and fill the void gain an advantage. Cisco delivers an HCI solution that provides the essential simplicity and cost-efficiency features of HCI, but also the consistent high performance that has been missing—and that customers need for mission-critical workloads. HyperFlex supports VMware and Microsoft on-premises virtualized environments, and expansion to bare metal, containerized, and multi-cloud environments.

HCI solutions have been focused on second tier workloads, but with the consistent high performance offered by Cisco HyperFlex, there is no reason HCI cannot support tier-1 production workloads. Cisco HyperFlex could be the right solution at the right time for organizations seeking cost-effective, scalable, high performance infrastructure solutions.