ESG recently conducted a survey of 373 IT professionals and respondents were asked to identify what they would consider their biggest challenges with respect to their storage environment. As shown in Figure 1, IT organizations are significantly focused on data growth (26%), data protection (26%), and data migration (23%). Cost, too, is clearly a key consideration for IT organizations, with more than half (68%) citing capital (i.e., hardware, 27%) and/or operational expenses (41%)—including both staff and power and cooling costs—as a storage challenge. Additionally, 19% of organizations cited cost as their primary challenge, whether related to CapEx (7%) or OpEx (12%).1 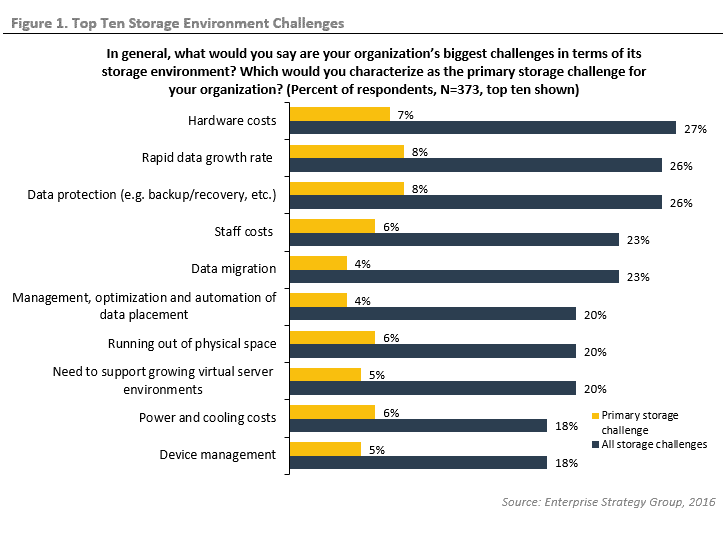 What’s driving these spending trends? After hardware costs, the rapid growth of data and the subsequent requirements to protect that data were the most commonly cited storage challenges. This makes sense in light of the fact that managing data growth and improving backup and recovery—both with obvious storage implications—were among the top five most-cited overall IT priorities in ESG’s 2016 IT Spending Intentions Survey.2

VMware Virtual SAN 6 is a software-based storage solution for VMware hyper-converged solutions. Embedded in the hypervisor and leveraging industry standard x86 components, Virtual SAN delivers flash-optimized, high-performance compute and storage for hyper-converged infrastructures.3 Virtual SAN provides easy scalability and seamless integration with the entire VMware stack, including VMware vSphere, making it a simple storage platform for virtual machines and ideal for business-critical applications, virtual desktops, IT operations, or remote IT applications. The solution scales from two to 64 nodes, and aggregates locally attached flash and magnetic disks into virtual data stores available to any VM in the hyper-converged cluster (Figure 2). 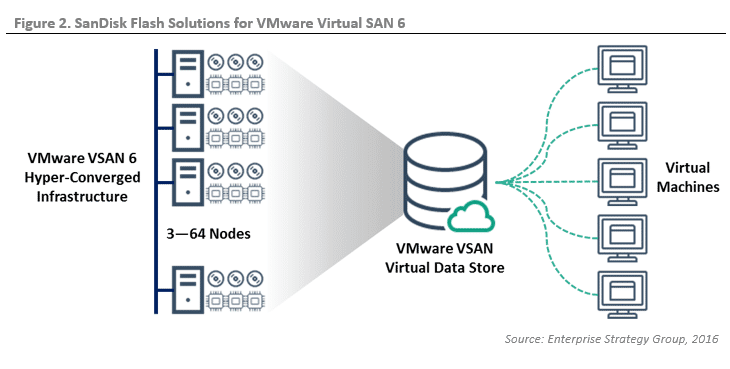 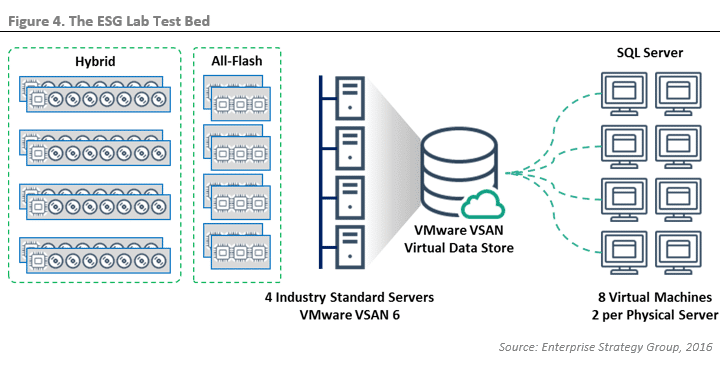 For the hybrid configuration, each physical server was configured with 16 drives, split into two disk groups of eight drives each. Each disk group was composed of seven industry-standard 1.2TB 10K RPM magnetic SAS drives for storage capacity, and one 800GB SanDisk Optimus Ascend SSD for the read and write cache.

For the all-flash configuration, each physical server was configured with six drives, split into two disk groups of three drives each. Each disk group was composed of two SanDisk Optimus Max 4TB SSDs for storage capacity, and one 800GB SanDisk Optimus Ascend SSD for write acceleration.

Eight virtual machines, two per physical server, were running Microsoft Windows Server 2012 R2 and Microsoft SQL Server 2014. Each VM was configured to have 16 virtual CPUs and 96 GB of RAM.

The workload itself emulated the database activity of users in a typical online brokerage firm as they generated trades, performed account inquiries, and executed market research. The workload was composed of ten transaction types with a defined ratio of execution. Four of the transactions performed database updates, and the rest were read only.

Each of the eight VMs was configured for 5,000 HammerDB warehouses. Eight separate HammerDB instances, outside the Virtual SAN cluster, acted as workload generators, and each instance was configured with 256 users, for 2,048 total users. ESG Lab started the test with a five-minute ramp to reach steady state operations. Once steady state was achieved, the test ran for 30 minutes. The performance of the system, measured in the number of new orders per minute entered into the database (NOPM), is shown in Figure 5. 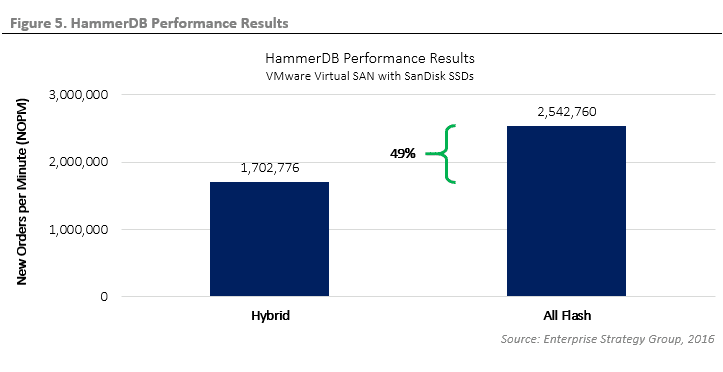 Next, ESG Lab explored the performance for each individual VM to learn more about how total load was distributed across each node. This is an important aspect of a virtualized infrastructure because having an even distribution of the workload across all of the VMs helps to validate the underlying hardware and software’s capability to properly meet the application’s resource consumption requirements. Along with the aggregate total of new orders per minute, ESG Lab analyzed the results for each node with a goal of seeing a proper workload distribution. The results are shown in Figure 6. 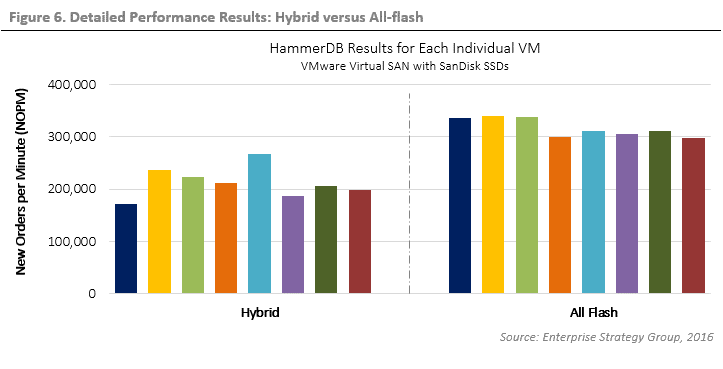 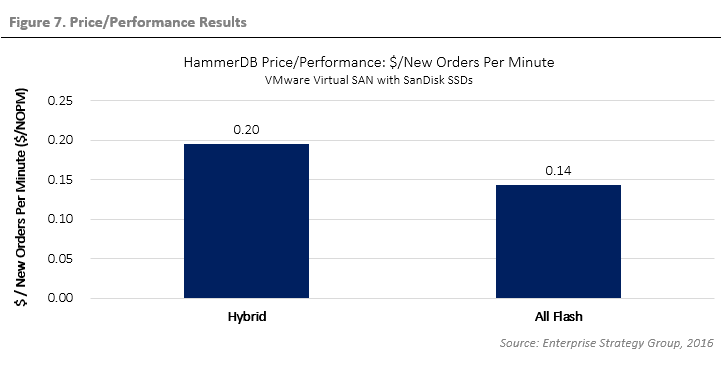 ESG Lab confirmed that a VMware Virtual SAN cluster with SanDisk SSDs easily accommodated the performance requirements of an enterprise-class virtualized OLTP database environment. Performance was excellent for a hybrid configuration, while the all-flash configuration delivered 49% better performance. The number of new orders per minute were evenly split between the VMs, highlighting the solution’s ability to efficiently distribute the OLTP workload across the entire cluster.

In addition, ESG Lab confirmed that the price/performance advantage of SSDs translated directly to the VMware Virtual SAN with SanDisk SSD solution. The all-flash solution, while having a 10% higher price, delivered 49% better performance, resulting in a 26% advantage in price/performance.

Traditional IT infrastructures with various hardware and management silos limit the ability of IT organizations to quickly and easily adjust to business needs and demands. This is especially true in virtualized infrastructures, which have proven to be effective in consolidating application workloads for potential CapEx savings, yet complexities around management and IT administration quickly drive OpEx costs through the roof. The quest for realistic and affordable options to deal with the challenges inherent in IT virtualization and consolidation is daunting. In massive, virtualized environments made up of heterogeneous hardware and software, these management complexities can grow exponentially. Storage management in a modern IT environment has to be simple and practical as well as functional because users will eventually be compelled to virtualize everything.

The VMware Virtual SAN 6 solution with SanDisk SSDs enables IT organizations to simplify all aspects of their operations. All the physical resources are aggregated into a cluster of standard x86 servers. Each server becomes a simple building block to easily scale up and scale out with the business. The distributed-everything architecture leverages a software-defined approach that aggregates all storage resources across the cluster and offers all the storage services that have come to be expected in enterprise infrastructure environments. And for enhanced performance, SanDisk Optimus Ascend SSDs deliver write acceleration while SanDisk Optimus Max SSDs add storage capacity.

Performance testing showed the advantages of SSDs in a real-world, virtualized OLTP database workload. The hybrid solution delivered 1,702,776 new orders per minute from a four-node VMware Virtual SAN cluster, while the all-flash solution delivered 2,542,760 new orders per minute, a 49% improvement. Both configurations demonstrated an even distribution of the workload across each of the VMs. And with cost being a major driver behind the adoption of hyper-converged technologies, ESG Lab was impressed with the potential reduction in TCO that the VMware Virtual SAN with SanDisk SSDs can bring to organizations. While the all-flash configuration price was 10% more than the hybrid solution, the 49% performance increase resulted in a 26% price/performance advantage.

VMware Virtual SAN with SanDisk SSDs proved to be robust, flexible, and responsive, delivering major value in terms of performance, economics, improved response times, high availability (HA), and easy administration. ESG Lab firmly believes that it would benefit any organization considering or implementing an IT virtualization project to take a long look at VMware Virtual SAN with SanDisk SSDs.

1. Source: ESG Research Report, 2015 Data Storage Market Trends, October 2015.↩
2. Source: ESG Research Report, 2016 IT Spending Intentions Survey, February 2016.↩
3. A hyper-converged infrastructure is largely software-defined, with tightly integrated compute, storage, networking, and virtualization resources.↩
4. Both the SanDisk Optimus Ascend and SanDisk Optimus MAX SSDs used in these solutions are certified for VMware Virtual SAN 6 and listed on the VMware HCL.↩
5. Detailed configuration information is provided in the Appendix.↩
This ESG Lab Report was commissioned by SanDisk and is distributed under license from ESG.

The goal of ESG Lab reports is to educate IT professionals about data center technology products for companies of all types and sizes. ESG Lab reports are not meant to replace the evaluation process that should be conducted before making purchasing decisions, but rather to provide insight into these emerging technologies. Our objective is to go over some of the more valuable feature/functions of products, show how they can be used to solve real customer problems and identify any areas needing improvement. ESG Lab's expert third-party perspective is based on our own hands-on testing as well as on interviews with customers who use these products in production environments.