The percentage of organizations that use or plan to use infrastructure-as-a-service (IaaS).1

The percentage of organizations that expect to maintain a measurable on-premises environment in the next three years.2

The percentage of organizations that view their IT environments as equally or more complex than two years ago.3

Enterprise cloud adoption continues to increase as organizations want to leverage infrastructure-as-a-service (IaaS) for the ease of application deployment and IT resources scalability. Yet, as the number of organizations planning to run production applications on the cloud grows, they still intend to maintain a measurable on-premises IT environment—data centers and remote offices/branch offices (ROBOs)—for the foreseeable future. Furthermore, the increasingly distributed nature of organizations and their applications make IT environments more complex and difficult to manage. These organizations need to ensure that their cloud-based resources are networked to their on-premises environments, and to one another, without incurring additional IT network complexity and associated costs. 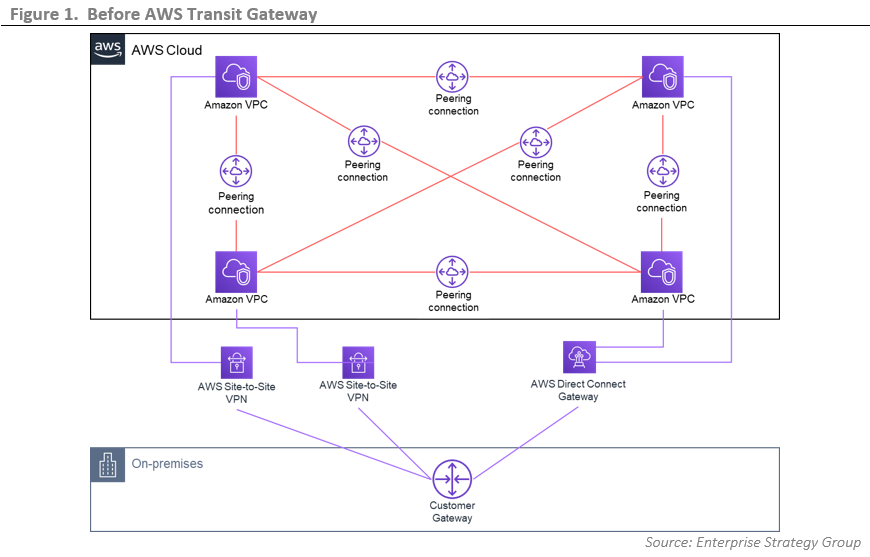 Ideally, organizations should be able to connect their cloud and on-premises resources without adding network complexity and ongoing management and operational effort.

Amazon Web Services (AWS) Transit Gateway is a managed, regional, and scalable service that enables organizations to interconnect a large number of Amazon VPCs and on-premises networks without relying on numerous point-to-point connections or the transit VPC.

AWS Transit Gateway simplifies how organizations connect their Amazon VPCs with one another and to their on-premises networks within a region (see Figure 2) by serving as a central point for Layer 3 network connectivity. By enabling a “hub-and-spoke” topology, the solution can help organizations reduce the number of VPC peering connections and consolidate access to the on-premises network.

Even though the number of VPCs is small and there is only one enterprise location in Figure 1, it is easy to see how the Transit Gateway simplifies the environment. Imagine how much complexity is removed when there are additional enterprise locations and hundreds or thousands of Amazon VPCs. Now, organizations can simply connect their on-premises networks and Amazon VPCs via AWS Transit Gateway. 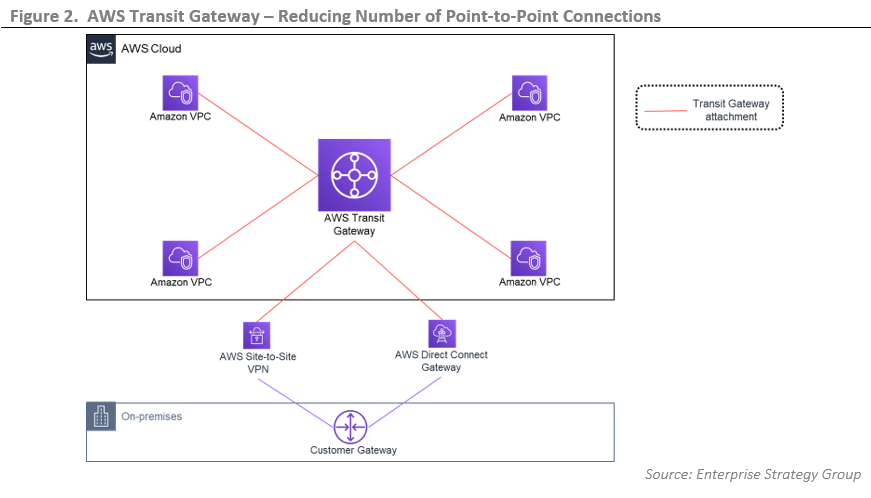 Reducing the overall number of point-to-point connections to create and configure individually, as well as dynamic routing between AWS Transit Gateway and an organization’s on-premises locations and Amazon VPCs, helps to decrease network complexity while increasing operational efficiency. Creating AWS Direct Connect, AWS Site-to-Site VPN, and VPC peering connections may require little manual effort (such as navigating multiple interfaces and configuring routers and gateways) for a small number of on-premises locations and Amazon VPCs. However, for enterprises with IT environments spanning hundreds of Amazon VPCs and multiple on-premises offices, that manual effort, along with the associated resources and costs, can very quickly become quite difficult to manage. Ultimately, using AWS Transit Gateway can help to lower operational efforts and costs while increasing business agility.

Organizations can now use AWS Transit Gateway to build out their IT networks without dealing with extensive network architecture planning and upgrades. They can take advantage of other networking and security services offered by AWS or AWS Partner Network (APN) Partners to deploy a global enterprise-grade network, as opposed to manually integrating different solutions from multiple vendors. Because AWS Transit Gateway is a managed service, enterprises can also avoid the hardware and software refresh and upgrade cycles typically associated with similar hardware or software-based solutions.

Key AWS Transit Gateway features that can be leveraged to build out a global network architecture while centralizing control, maximizing network and application performance, and ensuring overall network security include:

With inter-region peering, organizations can architect a private global network while decreasing the time and resources required to connect an organization’s Amazon VPCs and on-premises networks in different regions. Functional groups, such as engineering and development, can collaborate with minimal delay in creating the proper connections to communicate and thus respond to business needs quickly.

Enterprises can view components of their global networks through different visualizations (via lists, logical diagrams, or geographic maps) and alert administrators of unhealthy connections and changes in availability and performance across AWS regions and on-premises sites. Figure 3 shows the geographic view of a global network. Nodes represent network details such as AWS regions, AWS Transit Gateways, and on-premises locations. An administrator can click on any nodes to obtain detailed information. For example, by clicking on the US-West-2 node, AWS Transit Gateway Network Manager reveals its AWS Transit Gateways and connected on-premises offices. Status of the VPN attachments is also displayed.

In addition to monitoring near real-time network metrics, organizations can identify potential causes of network disruptions by analyzing how traffic is routed between AWS Transit Gateways and their attached Amazon VPCs and on-premises locations. With Route Analyzer (accessed via AWS Transit Gateway Network Manager main interface), organizations can identify potential causes of the disruptions.

An organization can share its AWS Transit Gateway with other AWS accounts so that they are free to attach their own Amazon VPCs or on-premises locations when business needs dictate (e.g., when development and testing groups need to collaborate). Enabling this support eases the process of setting up and tearing down these interconnections without having to configure route tables of multiple Amazon VPCs or on-premises routers and gateways. Management and administration of AWS Transit Gateway remains with the primary account in order to retain overall centralized control of the network. 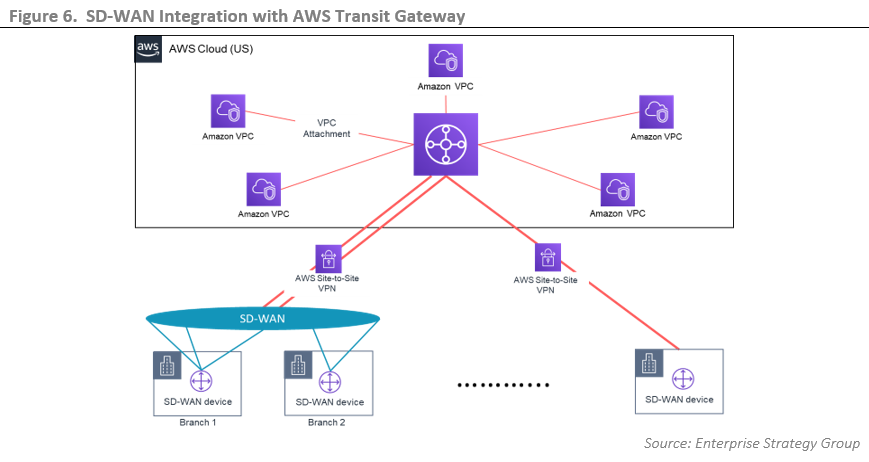 Integrating cloud and on-premises IT environments remains a challenge for organizations when pursuing a hybrid cloud strategy. A necessary part of that integration is ensuring that resources both in the cloud and on-premises locations are networked to respond to business needs without the need for extensive architecture planning, management, and administration.


Network Orchestration at Scale with the Aviatrix Orchestrator

The Orchestrator natively supports both Amazon Site-to-Site VPN and AWS Direct Connect, enabling organizations to connect their Amazon VPCs with their on-premises offices and data centers to create a hybrid cloud. Scaling a hybrid cloud environment is easier as the Orchestrator can automatically update route tables of Amazon VPCs within and across AWS Regions as well as across multiple AWS accounts, as well as customer gateways.

Central to the Orchestrator is the Aviatrix Controller, which creates the abstraction layer, representing the interconnection of an organization’s AWS Transit Gateway with its Amazon VPCs and related Security Domains (see Figure 7). Not only does the Controller automate route propagation, but it also provides end-to-end network visibility. This visibility includes network performance monitoring, such as latency between any Amazon VPCs.

When pursuing a hybrid cloud strategy, interconnecting IT resources in both the cloud and on-premises data centers and ROBOs presents challenges. AWS customers with a large number of Amazon VPCs to be networked with one another and on-premises locations have relied on numerous point-to-point connections, increasing network complexity and time spent on deployment, management, and administration. They need a solution that simplifies the network architecture while decreasing the time spent on network deployment, management, and administration.

Taco Bell is a global fast-food restaurant brand operated by Yum! Brands, Inc., a Fortune 500 global corporation. As of 2018, Taco Bell has over 7,000 locations in the Americas, Europe, and Asia-Pacific regions.

Based in Irvine, CA, Taco Bell’s IT operations focus on restaurant support, serving organizations responsible for a variety of functions, such as front of house (e.g., registers, self-serve kiosks, and digital menu boards), back-of-house (e.g., labor scheduling, timekeeping, and inventory management). Taco Bell had been leveraging AWS services and appreciated the speed and flexibility AWS offered for spinning up IT resources when needed. Over time, the company recognized that there was a lack of centralized control in the AWS environment; multiple individuals opened their own accounts unknown to IT operations. Individuals resorted to using personal credit cards to open AWS accounts, and no one person knew which Amazon VPCs peered with one another (i.e., there was little visibility into east-west traffic). Taco Bell also faced challenges in scaling its network, as deploying virtual firewalls in every VPC to secure traffic would not scale in the long run, both from a cost and operational perspective. Firewalls inspecting all traffic between Amazon VPCs could also impact network performance, which would conversely impact end-user experience.

While Taco Bell looked to build out a cloud-native network, it wanted to preserve the functionality that was used to operate and manage a traditional on-premises network. Taco Bell viewed the Aviatrix Orchestrator as key in providing the capabilities for managing and administering this network. The company leveraged the Orchestrator’s automation capabilities to facilitate dynamic routing so as to propagate route changes to all Amazon VPC route tables with minimal manual intervention.

Taco Bell also wanted to route traffic through a “central” firewall, as an organization would traditionally route all traffic through firewalls in a data center. To accomplish this, Taco Bell also implemented a Shared Services VPC to host the network’s firewalls. Using Aviatrix’s Security Domains, Taco Bell could set policies directing all traffic via AWS Transit Gateway to the Shared Services VPC, ensuring full unified threat management as all east-west and north-south traffic is inspected by the firewalls and firewall logs are collected for monitoring purposes. 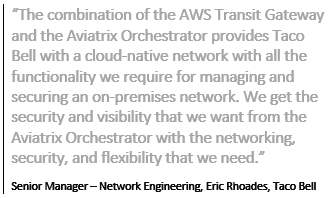 With AWS Transit Gateway, Taco Bell centralized network control, ensuring that all Amazon VPCs were created from one account so that it had visibility into the demand for AWS resources. It could now scale its network easily by leveraging the automation capabilities of the Aviatrix Orchestrator. Taco Bell also gained end-to-end visibility of its cloud-based network from a routing and security perspective with the Orchestrator. Using these solutions jointly, Taco Bell foresees that it can provide an overall better user experience for both its internal organizations and Taco Bell customers.

Organizations’ adoption of cloud infrastructure services continues to increase,8 yet most plan to maintain some level of on-premises environments.9 Building and updating the network underlying hybrid clouds can be a complex and time-consuming exercise that decreases business agility. To remove this burden, organizations can benefit from a solution that easily enables a global network architecture connecting cloud and on-premises environments while decreasing overall network complexity.

Using the Aviatrix Orchestrator, organizations can scale out their network easily via its automation capabilities. As changes to route tables occur, the Aviatrix Orchestrator propagates these changes throughout the network based on AWS Transit Gateway, reducing the time and effort typically dedicated to route table administration. Large enterprises building out their hybrid cloud environments with a large number of Amazon VPCs will especially benefit from the automation.

ESG’s case study validated that AWS Transit Gateway can serve as a platform for building and expanding a virtual network architecture interconnecting large numbers of Amazon VPCs with one another and with on-premises networks. At the same time, AWS Transit Gateway enabled our featured customer to centralize network control without sacrificing flexibility and scalability. The Aviatrix Orchestrator enhances the benefits of segmentation and network visibility that AWS Transit Gateway provides by providing functionality that large enterprises typically require for deploying and managing traditional on-premises networks.

AWS has managed to simplify the deployment of scalable network environments, yet large enterprises want to operate them in ways similar to traditional wired networks. As the AWS-Aviatrix partnership progresses, Aviatrix will need to respond quickly to its customers as AWS Transit Gateway continues to evolve to provide functionality that will help in transitioning from on-premises to hybrid cloud environments.

ESG was impressed with the benefits that AWS customers derived. We believe that organizations can leverage AWS Transit Gateway to address a wide variety of use cases related to building and managing the network underlying their hybrid clouds. We were also impressed with the capabilities of the Aviatrix Orchestrator and how they further simplify the deployment, management, and administration of hybrid clouds via its automation of route table propagation and end-to-end visibility. For organizations planning large-scale Amazon VPC deployments, ESG strongly believes that you should consider AWS Transit Gateway with the Aviatrix Orchestrator when evaluating solutions for interconnecting your cloud and on-premises environments.