For many organizations, the ability to collect data and analyze it in real time is an essential task that drives revenue, improves visibility, informs strategy, and aids decision making. For example, applications focused on financial trading, IoT, fraud detection, and real-time personalization must ingest large amounts of data and analyze it immediately. The challenge is finding a database platform with sufficient horsepower to handle large-scale ingest and querying simultaneously without impeding performance. When ESG asked database and analytics professionals about technologies supporting data analytics, performance was among the topmost important capabilities.1 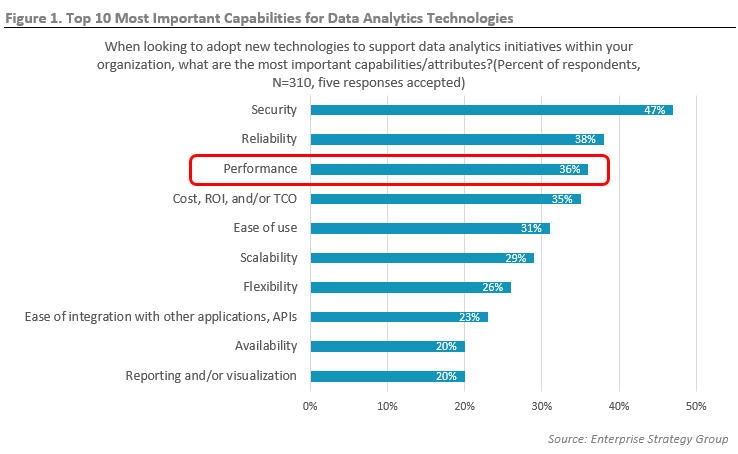 In-memory databases offer high performance but are expensive to scale and have hard memory limits that can affect reliability and cause restart delays. Traditional databases offer persistence and reliability but lack the high performance of in-memory databases. InterSystems IRIS can process both ingestion and query workloads simultaneously, with performance equal to or better than in-memory-only databases, without their limitations. InterSystems has published an open-source test to demonstrate this claim, which ESG is validating in this report. 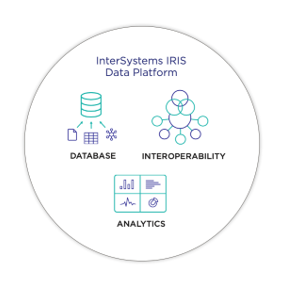 InterSystems IRIS is a data management software platform that was built for high performance, multi-workload processing at scale. As a multi-model DBMS, it provides native support for relational, object-oriented, document, key-value, and hierarchical data objects; in addition, it enables consistent high performance for both transactional and analytic workloads simultaneously. While a complete product description is beyond the scope of this report, some key functionality is described below.

ESG validated performance benefits of InterSystems IRIS using the company’s publicly available, customizable, open-source Speed Test benchmark kit.2 The benchmark was designed to measure concurrent real-time ingest and query performance. This is a common use case that financial services, fraud detection, IoT, and other applications face. For example, while financial services firms are executing thousands of trades, thousands of users are querying for order status, risk management, etc. Similarly, IoT sensor data comes in fast from the field and applications must perform immediate anomaly detection and other real-time calculations. When a database is stressed in this way, having to simultaneously ingest data and execute analytic queries can slow performance.

The Speed Test benchmark was designed to simulate the combined ingestion and query pressure that applications deal with. For a typical in-memory database, ingestion fills the memory and causes the database to compress and purge data from memory, with slow disk writes. Querying with high performance requires that data be kept in memory. Executing both tasks simultaneously impedes performance. 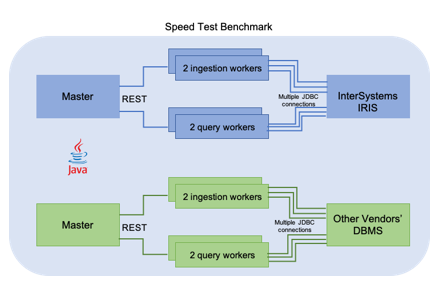 Speed Test queries the database for a set of predefined records as quickly as possible; this tests the ability of the database to keep frequently accessed records in memory and measure query response time under ingestion pressure. The ingestion workers open multiple JDBC connections to the database and use them to insert as many records into the table as possible.

To make the test comparable with a variety of databases and database types, there are no joins or special indices used. A single, 19-column brokerage account table is used, with accountID as the primary key (the only indexed column). Data includes strings, dates/times, and big integers.

The test uses two ingestion workers and two query workers. When ingestion begins, each worker generates 1,000 random values for each column in the table. When the ingestion needs to create a new record to add to a batch, it will 1) get the next value for the primary key column, and 2) combine values from the pool of random values previously generated to create a new record. When a batch is complete, it is sent to the database. This maximizes ingestion worker efficiency and speed.

The query workers will also open multiple JDBC connections to the database and use them to fetch a set of records using eight fixed keys by accountID as fast as possible. Record retrieval was intentionally kept simple to create a level playing field for comparing different database technologies and enabled the test to focus specifically on a system’s cache management as ingestion and queries run concurrently.3

The Master node collects statistics, including:

The query workers retrieve the records and sum the length of each column in the retrieved rows into a variable as proof of work. Retrieving the rows in this way forces the databases to send the data over the TCP/IP connection, preventing JDBC drivers from optimizing only for identification of data.

In this testing, comparisons were made with InterSystems IRIS and three other data platforms, all running in the AWS Cloud, and all running for 1,200 seconds (20 minutes). Vendor A is a leading in-memory database, while Vendors B and C are leading disk-based traditional databases; for testing against Vendors B and C, databases were pre-expanded to optimize performance when possible.

Figure 2 shows the total number of records ingested during the tests. This demonstrates the ability to ingest large amounts of data while performing concurrent real-time queries within a fixed time window. In each case, InterSystems IRIS ingested hundreds of millions of records, resulting in 65% more than Vendor A; 1,457% more than Vendor B; and 463% more than Vendor C.

In addition, in all three cases, the minimum and maximum rates of records ingested per second by InterSystems IRIS were higher than the others. This means organizations can count on consistently fast data ingestion rates. ESG reviewed the variability of ingestion rate by reviewing the standard deviation and graphs of ingestion over time; IRIS showed less variability in all cases. For example, the graph in Figure 4 compares Vendor A with InterSystems IRIS in terms of ingest rate. While both started with high ingest rates, the in-memory database (Vendor A) declined 48% from its maximum. While the in-memory database ingested data quickly at first, performance degraded as the memory filled. Compression becomes more difficult with more data, and more data in memory forces an in-memory database to write to disk. In contrast, InterSystems IRIS quickly reached a high ingestion rate and remained steady throughout the test. 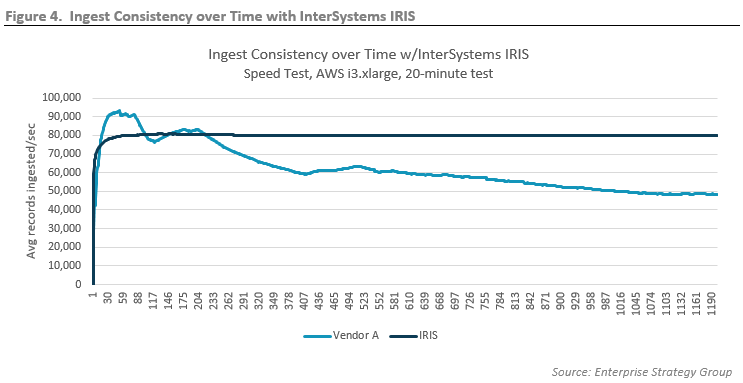 Next, we looked at the total number of records queried while concurrently maximizing data ingestion. The more queries a database can execute, the greater the potential for insights, better decision-making, and real-time actions. InterSystems IRIS queried 1,974% more records than Vendor A, 360% more than Vendor B, and 3,688,165% more than Vendor C.4

In addition, in all three cases, InterSystems IRIS demonstrated significantly less variability in response times than the others; this means that InterSystems IRIS consistently delivered high performance querying while ingesting data at a high rate. Table 2 shows query response time minimums, maximums, and standard deviations for each test.

Unfortunately, traditional disk-based databases are often too slow for the high throughput and data access rates required. In-memory databases can offer high performance but are expensive to scale and have hard memory limits that can affect reliability and cause restart delays.

InterSystems created the Speed Test benchmark to be a simple test of data platform horsepower and to evaluate a data platform’s performance capabilities for concurrent high-volume data ingest and querying. ESG validated the results of performance testing that compared IRIS with three other data platforms, all running in the AWS Cloud. Results of 20-minute testing included:

These results demonstrate that InterSystems IRIS can provide an excellent foundation for these types of applications. Having a platform with this caliber of performance can assure organizations of maximum uptime and performance during events that drive data ingestion and query spikes. In addition, InterSystems IRIS can be more cost-effective than other data platforms that depend on large memory volumes or that must create separate data copies, increasing disk costs.

The results documented in this test were based on testing in a controlled environment; however, InterSystems has made the benchmark kit available as open-source software for anyone to run either in AWS or using Docker on local machines. Still, in production, your mileage may vary, as the variables in any production data center will impact performance. It is important to plan and test in your own environment to validate the efficacy of any solution.

1. Source: ESG Master Survey Results, The State of Data Analytics, August 2019.↩
2. https://github.com/intersystems-community/irisdemo-demo-htap↩
3. The GitHub link (https://github.com/intersystems-community/irisdemo-demo-htap) includes instructions for modifying the test to add complexity.↩
4. Query results (both number of records queried and response time) for Vendor C were significantly lower than others. Troubleshooting the environment to improve results was unsuccessful with the configured RAM.↩
This ESG Technical Review was commissioned by InterSystems and is distributed under license from ESG.
Topics: Data Platforms, Analytics, & AI data management