This ESG Technical Review documents hands-on review and auditing of the Dell EMC PowerProtect DD Series Appliances. The goal of the report is to validate that the next generation of the solution delivers improved performance for backup and recovery of business-critical data.

ESG research reveals that 49% of businesses identified improving SLAs and reducing RPOs and RTOs as top challenges when looking at their data protection technologies and processes.1 Businesses increasingly rely on their IT systems to deliver critical business functions in a 24x7x365 manner. Critical applications that support these functions need to be recoverable quickly and reliably in a variety of different failure scenarios, including component failure, data corruption, ransomware attacks, and the failure of an entire data center. However, today’s modern applications are more complex, distributed, and interdependent, making the successful recovery of even a single application challenging. Multiply this by the hundreds of applications that the IT organization must support, and the scope of the problem can seem insurmountable. 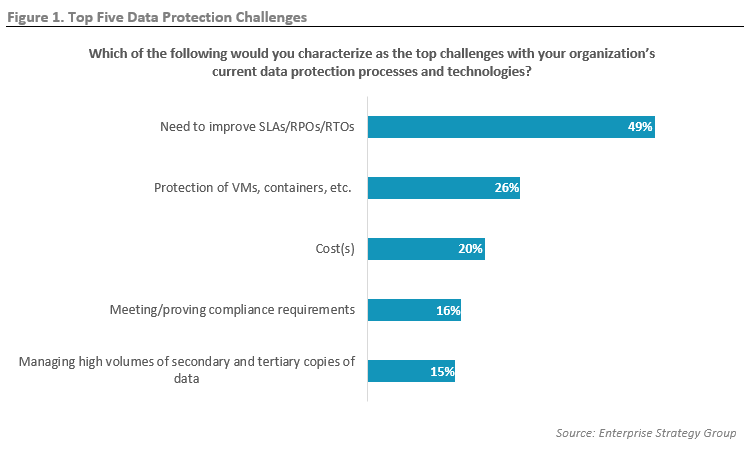 Dell EMC PowerProtect DD Series Appliances enable organizations to protect, manage, and recover data at scale across their diverse environments. These appliances are the next generation of Data Domain, specifically architected to protect data on-premises, in the cloud, and in hybrid environments. PowerProtect DD Series Appliances include PowerProtect DD9900, DD9400, DD6900, DD3300, and the software-defined PowerProtect DD Virtual Edition (DDVE). PowerProtect DD can deliver usable capacity of up to 1.25PB in a single rack and improves logical capacity by up to 30% through hardware-assisted compression. This reduces the overall data center footprint and lowers power and cooling costs. Backup performance can reach up to 94TB/hour, and instant access recovery performance can reach up to 60K IOPS. PowerProtect DD also delivers the functionality that existing Data Domain customers have access to today, including replication, data-at-rest encryption, cloud tiering, and cloud disaster recovery. PowerProtect DD provides an enhanced, simple-to-use system management UI for each appliance as well as a global dashboard for managing and monitoring multiple appliances simultaneously. 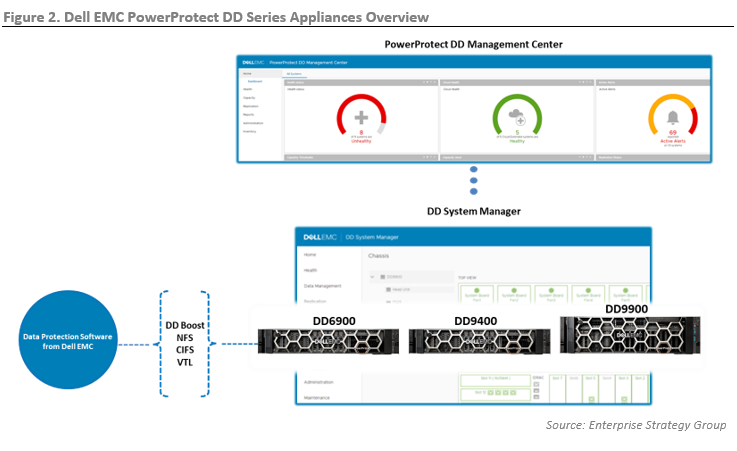 ESG performed an architecture review and an audit of performance testing results for the PowerProtect DD Series Appliances via joint demo sessions hosted by Dell EMC. We conducted a detailed review of the test harness components, collected and audited the backup results, and ran a sample set of testing to confirm the testing methodology.

ESG began its review with a high-level exploration of the generation-over-generation backup performance improvements Dell EMC has been able to deliver to its customers with its PowerProtect DD platform. As shown in Figure 3, the generation-over-generation performance improvements for the platform start at 58.7 TB/hr. on the DD9500 Appliance and increase to 94 TB/hr. for the new PowerProtect-technology-based DD9900 Appliance. It should be noted that there is a significant jump in the improved performance percentage achieved between the new PowerProtect DD9900 and the older generation technology DD9500 and DD9800 Appliances. 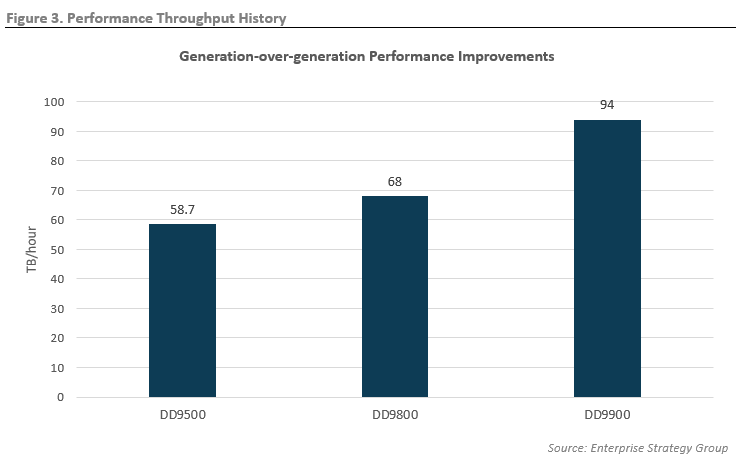 Next, ESG conducted a detailed review of the test environment components, configuration, and performance results the test harness produces. There are five major components to the test harness. These components include the web UI, the scheduler, the backup client machines, the PowerProtect DD appliance, and a performance DB machine. The web UI allows testers to provide configuration input to the simulated backup workload and to monitor the test runs. The scheduler executes the simulated workload on the backup clients, collects the stats and logs, and sends the data to the performance DB machine to store. The PowerProtect DD appliance is the target for the data protection data. The web UI allows a tester to configure test parameters of a job, such as type (e.g., full, synthetic, and CBT), protocol (e.g., NFS, DD Boost, and CIFS), target PowerProtect DD, and the number of backup or restore streams. Once the parameters are set, jobs are submitted with different stream counts until the maximum throughput for each workload is reached. 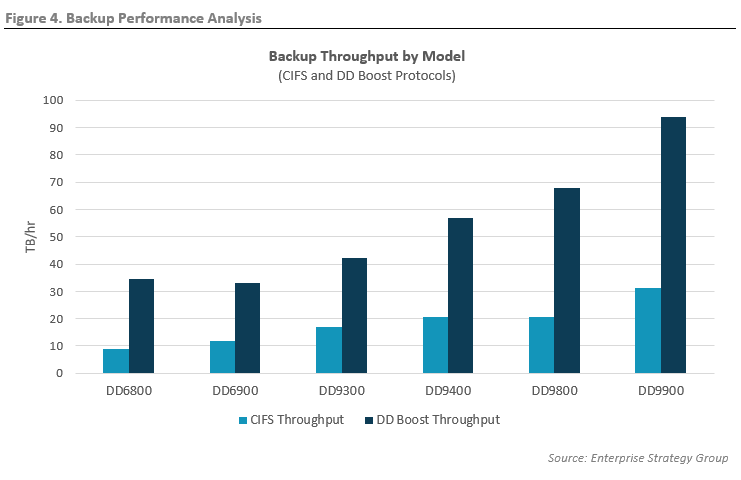 Finally, ESG explored the performance characteristics of the solution by backup protocol. Figure 5 shows a detailed breakout of throughput by protocol for each PowerProtect DD Appliance model tested. It should be noted that due to its efficient and flexible deduplication capabilities, DD Boost delivers a significant performance advantage over the other protocols. 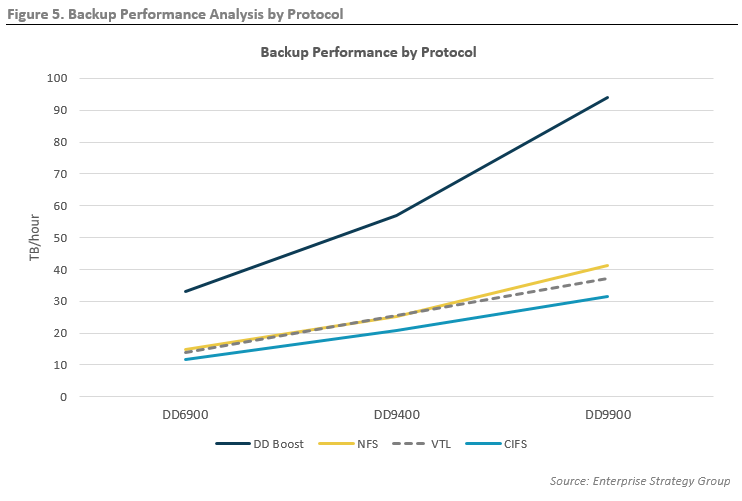 Why is backup performance so important? Because overrunning a backup window can put unplanned stress on production system resources, thereby decreasing system/business productivity. And, most importantly, missing a backup window altogether can put the ability to recover data at risk. If backup can’t keep up, more windows will be missed, and more data will be put at risk.

ESG confirmed that the PowerProtect DD Series Appliances were designed with performance in mind. The series delivers up to 38.7% more backup throughput performance than the previous generation, and it supports the protocols needed to protect modern workloads efficiently.

At a recent event, Michael Dell talked about how our world is being digitally transformed and the promise that data holds to advance humanity. He spoke about the enormous amount of data this transformation is streaming at us from every part of our lives. He said, “In 2007, the entire cellular network in the United States moved 86 petabytes of data. Today, 86 petabytes moves across the cellular network in 18 hours. And ten years from now, 86 petabytes will move in ten minutes. That's a 52,000-times increase in the amount of data.”2

That is a lot of data, and unlocking its potential does not always make life easy for the IT professionals that have to manage and protect that data. Managing and protecting your small piece of this global digital transformation can be daunting, and at times it may seem like you are tasked with moving petabytes of data around your organization in minutes.

This is where the new PowerProtect DD Series Appliances come into the picture. Clearly, the series has been designed with modern data workload protection performance top of mind. During our review, ESG confirmed the following performance capabilities and improvements:

Overall, ESG was impressed with the performance improvements we observed in the PowerProtect DD Series Appliances. Moving forward, we would love to see some of the scale-out capabilities of the PowerProtect X400 integrated into the solution. Also, we believe integration with any ML/AI capabilities of the backup application for intelligent data management and placement will be important in keeping pace with the data transformation evolution.

If you are currently looking to refresh your data protection infrastructure or if you are trying to shrink your backup windows and improve restore capabilities, the PowerProtect DD Series Appliances from Dell EMC should be on your evaluation list.