This report documents performance testing of the IBM FlashSystem family of storage platforms with end-to-end NVMe, including a comparison of 16GB versus 32GB Fibre Channel (FC) Host Bus Adapters (HBAs) in the server and storage array along with the b-type storage network switch. 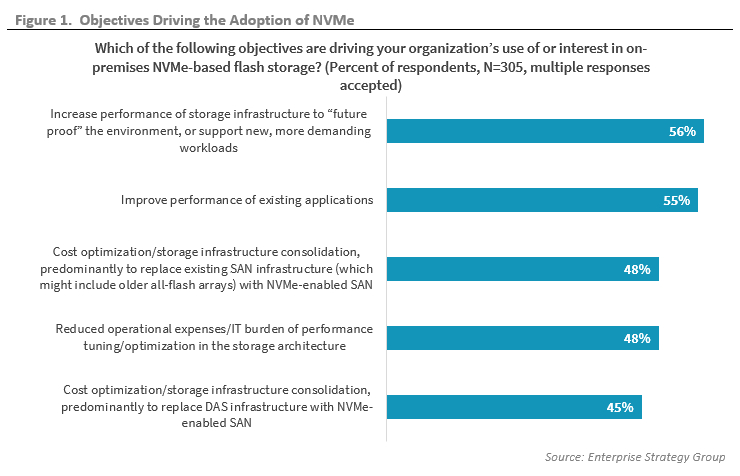 However, NVMe drives alone cannot solve all the potential I/O bottlenecks. Enabling end-to-end NVMe connectivity—from the host through the switch to the flash array—with NVMe over Fabric (NVMe-oF) can eliminate the bottlenecks and speed performance.

Figure 2 demonstrates the advantages of end-to-end NVMe using IBM FlashSystem family with IBM b-type 32G storage networking. It provides frictionless data movement throughout the data path, from the host through the switch to the storage and back-end drives. This increased performance lets organizations accelerate the execution of business processes to drive revenue. It also enables more efficient use of storage with AI-powered storage insights; more efficient server usage including the opportunity to reduce CPU and memory requirements; and future-proof ROI, offering a rich set of data services across all storage systems with IBM Spectrum Virtualize.

ESG audited the results of testing conducted at an IBM data center in the Washington Systems Center (WSC) in Herndon, VA. Typical Oracle application workloads were tested with a goal of quantifying the performance acceleration and server efficiency benefits of end-to-end NVMe powered by IBM FlashSystem 9200 with IBM b-type storage networking and Emulex Fibre Channel technology.

Typical database workloads were tested with HammerDB, an industry-standard, open source database load testing and benchmarking tool. As shown in Figure 3, Oracle 12c applications were tested on a 48-core Intel Xeon server with an Emulex LPe35002 host bus adapter that was connected through an IBM SAN128B-6 storage network switch to an IBM FlashSystem 9200.3 The storage network was configured with two 16G and two 32G Fibre Channel connections between the FlashSystem 9200 and the storage network switch. This configuration was zoned to make it easy to compare the performance of applications that were deployed on different storage networks (e.g., the latest 32 G end-to-end NVMe over Fabric versus previous generation 16 G Fibre Channel).

The ESG validation test bed also demonstrates the future-proof benefits of leveraging existing Fibre Channel infrastructure while enabling the performance and efficiency benefits of NVMe over fabric. Two types of NVMe fabrics are emerging: NVMe over RDMA (e.g., RoCE, iWarp, and Infiniband) and NVMe over Fibre Channel (NVMe/FC). In this case, testing was performed with a dual-protocol storage network that supports traditional FC and next-generation NVMe/FC. This dual-protocol storage network approach reduces risk in a variety of ways including:

The ESG validation began with a series of performance benchmark tests that were designed to quantify the benefits of a 32G end-to-end NVMe storage network upgrade. Throughput-intensive application workloads that ingest and process large data sets benefit the best from a storage network bandwidth and protocol upgrade. Examples include artificial intelligence, machine learning, video editing, and analytics.

An analytics workload was tested with an Oracle 12c database configured with a 32KB block size for this throughput-intensive test.4 The HammerDB workload generator emulated a decision support system that examines large volumes of data, executes queries with a high degree of complexity, and gives answers to critical business questions. 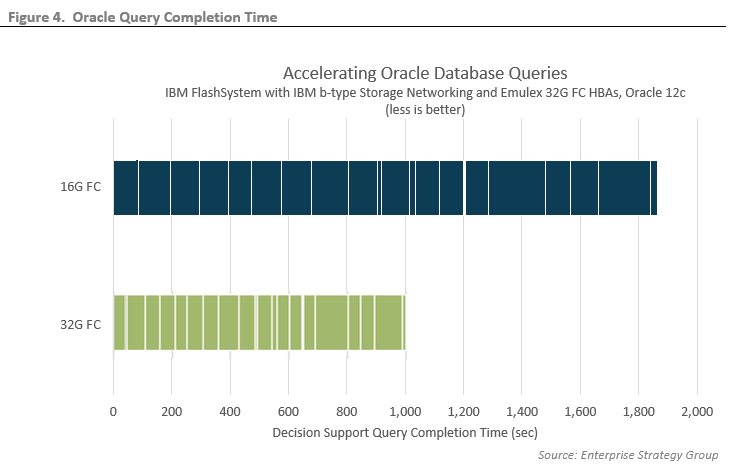 Figure 5 illustrates the aggregate throughput over time while the series of database query tests were running. The dips in the graph indicate where HammerDB recorded the results and restarted each of the 22 queries. The peaks illustrate how the 32G FC storage network sustained rates of 6.16 GB/sec, about twice as fast as the 16G FC network (3.14 GB/sec). 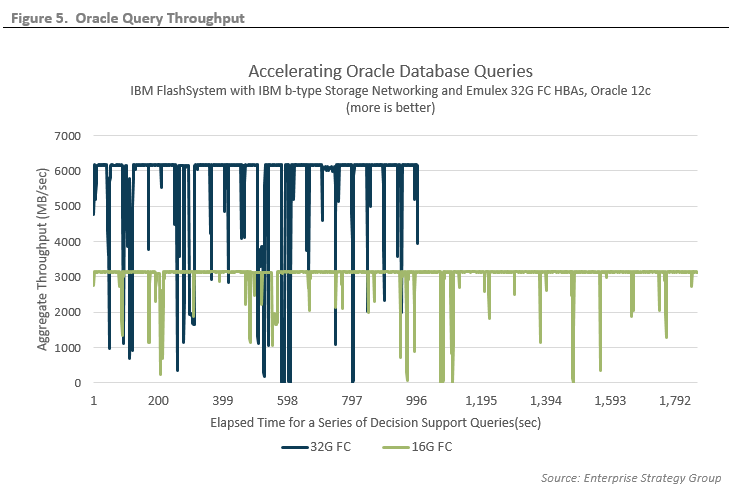 The ESG validation included a series of performance tests that quantified the benefits associated with the lower latency of IBM b-type storage networking and Emulex Fibre Channel technology and the efficiency of an end-to-end NVMe over Fabric storage network. Response time-sensitive workloads benefit the most from the lower latency and improved efficiency of end-to-end NVMe. Examples of multi-user application workloads that benefit from lower I/O latency include e-commerce, software-as-a-service (SaaS), and online transaction processing (OLTP) systems.

An OLTP workload was tested with an Oracle 12c database and HammerDB. The HammerDB workload generator emulated the activity of users in a typical online brokerage firm as they generate trades, perform account inquiries, and execute market research. The Oracle 12c database was configured with an 8KB database block size.5 The results are summarized in Figure 6 and Table 1. (Note: This test was designed with a goal of quantifying protocol performance benefits, not the maximum performance capabilities of the FlashSystem 9200.) 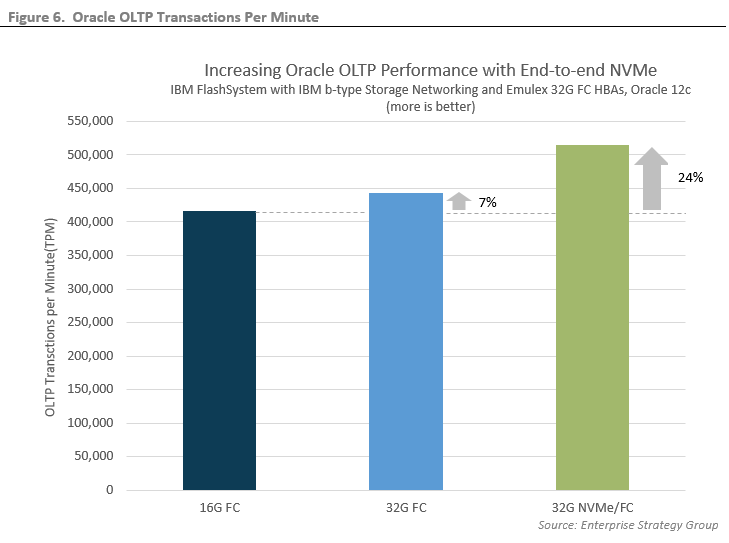 For many organizations, response time-sensitive workloads such as e-commerce, SaaS, and OLTP are critical revenue drivers. The faster these processes can be executed, the greater the impact to the business. More transactions per minute lead to higher revenue and greater customer satisfaction.

The improved efficiency of IBM b-type Fibre Channel hardware and the NVMe over Fabric protocol reduces the CPU and I/O overhead of application servers. Performance statistics were captured with the Linux iostat utility during the Oracle OLTP performance test with a goal of quantifying the improved server efficiency. The results are shown in Table 2 and Figure 7. 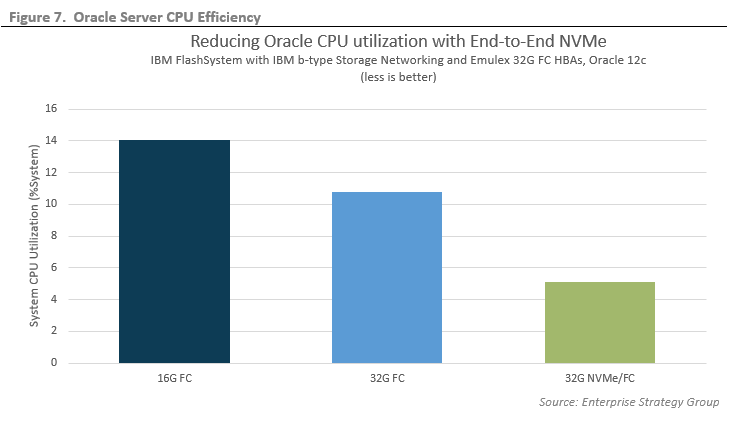 Organizations could get the fastest performance by running their applications in memory, but the cost of that would be prohibitive. Therefore, IT is continually trying to balance performance with cost and efficiency, striving to service more users and add more business value with less infrastructure and cost.

If the infrastructure associated with business-critical Oracle workloads is struggling to meet the performance needs of the business, an end-to-end NVMe strategy with IBM can provide significant CapEx and OpEx savings and immediate ROI. Leveraging existing FC components and networks makes NVMe/FC an immediately viable alternative for many organizations, enabling them to increase performance without ripping and replacing infrastructure. 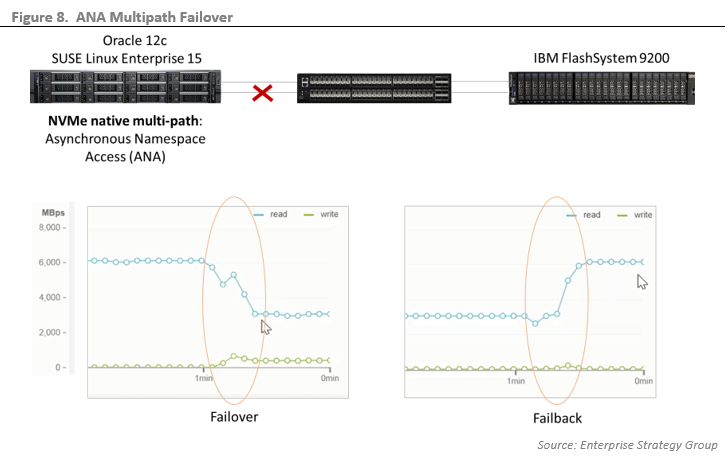 Business-driving applications demand high availability and high performance. Managing and maintaining infrastructure is costly and can interfere with business processes. A key business goal is for IT staff to spend less time keeping their applications running without interruption. ESG validated that the Auto Connect and ANA features enabled multipath failover with the native NVMe driver in SLES-15 and IBM end-to-end NVMe. This supports high application availability without administrator intervention.

NVMe-oF provides end-to-end NVMe that brings another 10X improvement. This speeds connectivity from the host through the switch to the flash array, enabling another order of magnitude performance improvement.

This solution—the IBM FlashSystem with IBM b-type 32G storage networking and Emulex 32G FC technology—demonstrates numerous benefits of end-to-end NVMe. Higher performance is the most obvious, but in addition it enables workload consolidation, which leads to lower costs. The NVMe protocol is more efficient than traditional SCSI, and NVMe-oF allows NVMe native devices to operate on existing Fibre Channel infrastructure, making it simple and cost-effective to add into a current FC environment. And, by lowering the CPU utilization on the host, it can significantly reduce the processing and memory needs of servers, freeing up resources to run applications, and saving on power, cooling, and licensing costs for applications such as Oracle.

Competition drives enterprises today to ever-higher levels of performance for databases, analytics, and transaction-oriented workloads. But IT must always make a tradeoff between performance and cost, even with technology innovations like NVMe. The advantage of the solution we tested is that these tradeoffs are diminished. This solution delivers high performance and low latency with frictionless data movement from the host through the network, all the way to back-end storage, but it also provides for greater efficiency—and lower costs—at both the storage and server CPU level. While native NVMe drivers are currently supported on only two flavors of Linux, support for additional operating systems and hypervisors is on the horizon. If your organization is looking to increase performance while reining in costs with a future-proof NVMe infrastructure, the IBM FlashSystem with IBM b-type storage networking and Emulex 32G FC technology is worth a hard look.

The configuration of the test bed that was used for the ESG Validation testing is summarized in the table below. 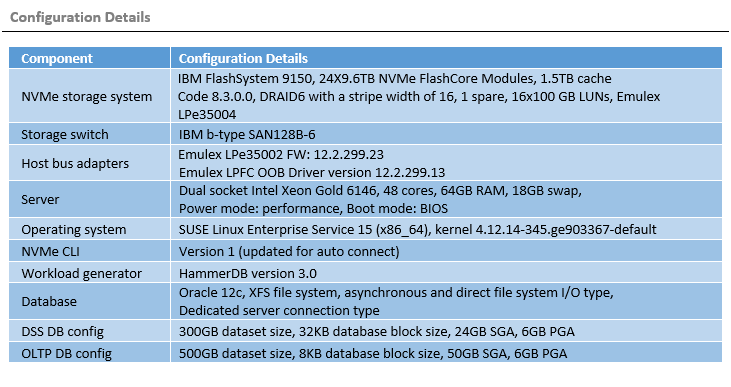