Enterprises are collecting growing quantities of data that are not only used in business-driven applications such as online transaction proceeding (OLTP), Oracle, and SQL Server, but also for customer insight and business trends. In ESG research, 48% of IT decision makers reported both primary production data and secondary data growing by more than 30% annually.1 Growing business demands and IT complexity make it challenging for IT to design optimized data centers that deliver the levels of performance, scalability, efficiency, and agility required to succeed.

Storage, once considered to be a static, background IT process, today plays a critical role in delivering on business success. The right storage infrastructure can deliver the optimal mix of performance, efficiency, cloud functionality, and cost. When asked what best describes the role that data storage technology plays in their organization’s IT and business operations, 53% of ESG survey respondents agreed that storage was strategic, and that effective storage strategies were critical to their core applications and business processes.2 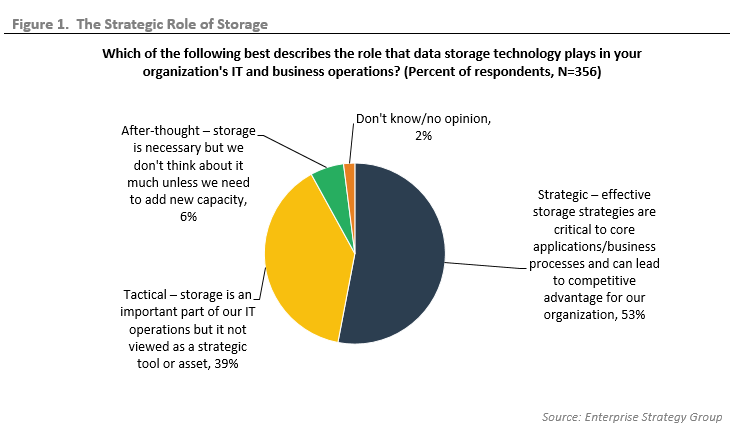 Enterprises need consolidated storage to handle mixed workloads efficiently and cost-effectively, but with the scalability for exponential growth and the high performance/low latency that today’s applications require.

PowerMax is designed for consolidated, mixed workloads that demand high performance at scale, such as OLTP, decision support, real-time analytics, SAP, Oracle, and SQL. The latest PowerMaxOS release brings end-to-end NVMe and SCM drives powered by dual-port Intel Optane technology for optimal performance and low latency; Dell EMC reports exceptional performance of up to 15M IOPS and 350GB/s bandwidth. It is designed for six nines availability, massive scalability (from 13TB up to 4PB effective capacity, 256 front-end ports, 64,000 LUNs), and consolidation of open systems, mainframe, IBM i, file storage, and containerized applications on the same array. Each PowerMax brick includes one engine, up to two array enclosures, and reductant components. PowerMax 8000 supports up to eight bricks (16 controllers), and PowerMax 2000 up to two bricks (four controllers).

The latest PowerMax preserves the design concept of EMC’s long history of leading enterprise arrays: that is, maintaining a large cache so that hosts access data primarily from cache (DRAM) to deliver the best application performance, but also providing maximum back-end drive speed. PowerMax is built on a multi-controller architecture with a globally consolidated cache accessible to all 16 controllers, enabling most data to be accessed from the cache DIMMs, which provide the lowest latency and speed of absorbing writes. The addition of end-to-end NVMe and Storage Class Memory (SCM) technologies are the latest innovations to support this design.

The Difference with NVMe Drives

While flash drives made a significant impact in storage performance compared with HDDs, those that connect through SATA/SAS interfaces are hindered in I/O parallelization and ultimately in the performance they can deliver. These interfaces were designed for traditional hard drives, not for high speed flash media. The NVMe protocol was developed specifically for non-volatile, high-speed flash media. Key features that enable maximum performance and lowest latency are NVMe’s ability to run vastly greater numbers of parallel I/O operations, its streamlined connection to host CPU, and the simpler software stack that reduces I/O processing time and CPU overhead. These features accelerate existing applications and enable new applications that demand real-time processing. In addition, by handling hefty workloads in a smaller footprint, NVMe arrays can reduce TCO.

The latest version of PowerMax adds two significant advancements: 1) NVMe over Fabric (NVMe-oF) front-end connectivity that enables end-to-end NVMe; and 2) the option for SCM powered by dual-port Intel Optane as a persistent storage tier for ultra-low latency. These new features provide the storage foundation for mission-critical applications that demand the highest levels of performance, such as OLTP and real-time analytics.

These advancements support the PowerMax architecture concept of making the most use of cache to speed host reads and writes, and reducing the latency when data is accessed from the back-end drives. This powerful combination of the fastest protocol and drive technologies with automated tiering create an array that offers not only maximum performance, but also the ability to balance performance and cost. Workloads that need the highest performance can have it, while other workloads are not burdened with excess cost.

Other PowerMax features include: 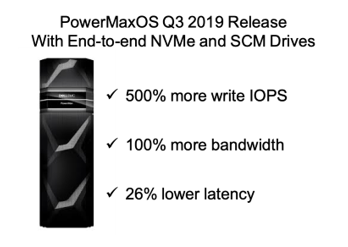 To remain competitive, enterprise IT organizations today must deliver fast performance to support the needs of applications in real time.

ESG validated that the latest single-engine PowerMax 8000 with a 32Gb FC-NVMe director and SCM with dual-port Intel Optane drives provided 500% more write IOPS, 100% more bandwidth, and 26% lower latency than the 16Gb director and NAND flash drives. These capabilities enable organizations to get more work done in the same footprint, reducing TCO with consolidated management and lower node-based licensing costs for applications like Oracle. 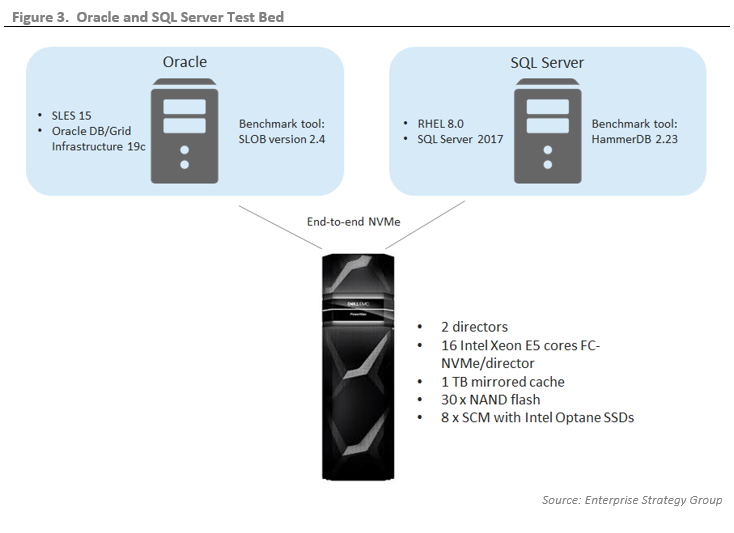 First, we reviewed the mixed workload scale test results. Oracle and SQL Server workloads were generated first with a single server and then two servers with conservative cache hits of 60% for Oracle and 45% for SQL Server. Single server testing demonstrated sub-millisecond response times of 0.19 ms and 0.13 ms, providing extremely low application latency. With two servers, IOPS increased 101% for the Oracle workload and 72% for SQL, but response time remained extremely low at 0.19 ms and 0.23 ms. Figure 4 shows the IOPS and response times of each workload during scaling. The dotted lines indicate that latency would remain low even with an additional increase in IOPS if PowerMax bricks and servers were added. 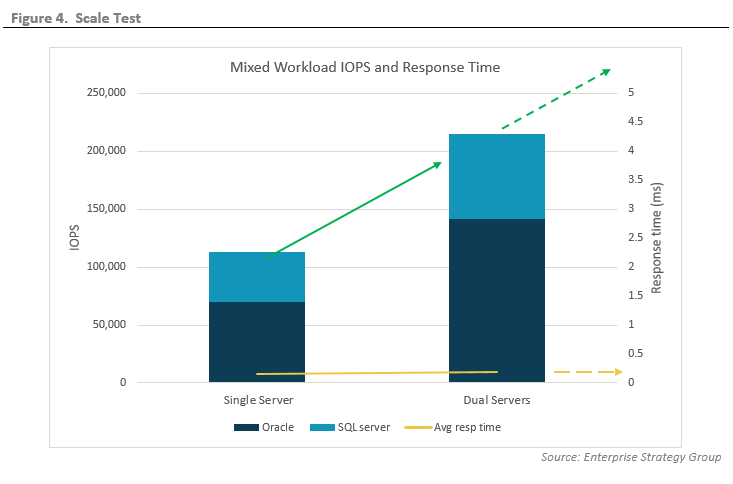 To make these results more applicable in the real world, we reviewed specific Oracle and SQL metrics. The log file parallel write metric is an Oracle Automatic Workload (AWR) statistic that quantifies the average wait time for processes that are waiting for blocks to be written to the online redo log. Significant log file parallel write wait times are a likely indicator of an I/O issue with the Oracle Log file. As Table 1 shows, log file write times of under half a millisecond remained essentially constant as the amount of database activity doubled during testing (0.37 ms to 0.38 ms).

Using the results of this single node performance test as the basis for a theoretical projection of a maximally configured PowerMax platform, ESG is confident that the performance of the PowerMaxOS Q3 2019 release can support a mixed workload that includes business-critical Oracle applications and a virtualized SQL Server infrastructure serving hundreds of thousands of customers and millions of transactions per minute.

Next, we reviewed results of QoS testing that demonstrates the performance of applications when “noisy neighbor” applications compete for resources. The test occurred in steps: 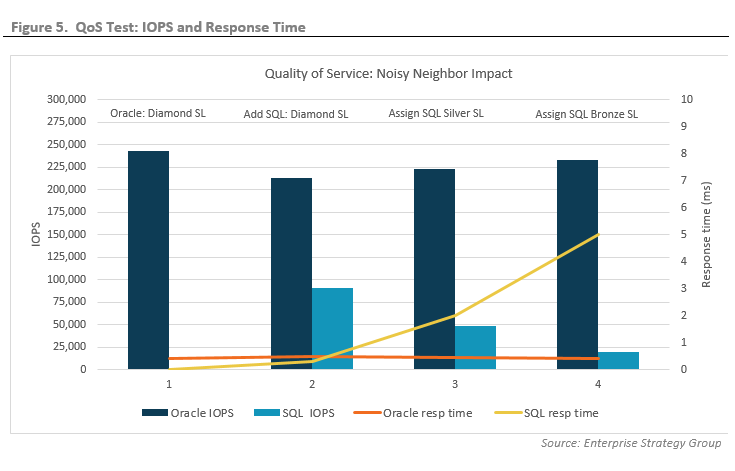 Enterprise applications like Oracle and SQL Server drive businesses every day and demand high performance for workloads such as OLTP and real-time analytics. To collect the massive data volumes needed and deliver virtually instant data access for applications such as online trading, fraud detection, retail customer interactions, and the like, these applications must be supported by an enterprise-class storage foundation. Large-scale consolidation of mixed workloads can increase cost efficiency as long as mission-critical workloads are assured of the highest performance.

ESG validated the ability of the latest PowerMax 8000 with end-to-end NVMe and SCM powered by dual-port Intel Optane drives to maintain extremely low latency (less than a quarter of a millisecond) for mixed Oracle and SQL Server workloads while IOPS increased. Oracle log files indicated no I/O bottleneck, and SQL transactions-per-minute scaled in-line with increased IOPS. These results, and the field-proven scalability of the PowerMax as engines are added, confirms that the PowerMax can serve hundreds of thousands of customers and millions of transactions per minute.

We also validated the ability of this array to provide priority performance based on service-level assignments in mixed workload environments. Lower priority applications can run simultaneously, but a high-priority workload will retain its IOPS and response time regardless of other activity. This enables consolidation on a single array without compromising application performance.

Infrastructure vendors must continue to innovate in order for enterprises to take full advantage of emerging technologies. It was not long ago that applications such as real-time analytics were considered bleeding edge, only for the most tech-savvy organizations with the deepest pockets, but advancements have made these technologies available to almost any organization. For many, the challenge now is to create an infrastructure that can support the massive data volumes and fast data access that are required for analytics, fraud detection, trading, interactive retail, and future technologies still on the drawing board.

It should come as no surprise that Dell EMC has made great strides to deliver on these requirements, as the company is well known for its investments in R&D. The latest PowerMax OS release has added end-to-end NVMe and SCM powered by dual-port Intel Optane technology to the already fast, scalable storage platform, and, unlike the few other arrays that support SCM, PowerMax includes SCM drives as a persistent storage tier, not as cache. These new capabilities offer significant performance improvements while enabling organizations to consolidate block, file, and mainframe workloads, shrinking the hardware footprint for reduced power consumption, streamlined management, and lower TCO.

And the performance improvements are quite real; Dell EMC reports exceptional performance of up to 15M IOPS and 350 GB/s throughput with under 100 microseconds read latency. ESG validated both internal and application-level testing with a single-engine PowerMax 8000. The first tests demonstrated 500% more write IOPS, 100% more bandwidth, and 26% lower latency. Oracle and SQL Server testing demonstrated extremely low response times—less than a quarter of a millisecond—even as IOPS doubled, along with the ease with which PowerMax prioritized performance for a mission-critical Oracle workload while running a SQL Server workload at various service levels. These are levels of performance with persistent storage that begin to rival the speed of memory.

ESG looks forward to seeing how customers respond to these new PowerMax features. At this point, the dual-port Intel Optane SCM drives have not seen wide industry testing, but Dell EMC has invested heavily in testing and integration to ensure smooth operation. In addition, NVMe-oF is only available on Linux so far, but support for other operating systems will be available in the near future.

PowerMax is the culmination of years of Dell EMC innovation in storage architecture. It is flexible and scalable, with AI/ML-driven data placement and a future-proof design. With its multi-controller, “shared everything” scale-out architecture, end-to-end NVMe, and SCM with Intel Optane SSDs, PowerMax offers the highest levels of performance, scalability, consolidation, and efficiency for both traditional high-demand workloads such as Oracle, SQL Server, and other OLTP and next-generation applications such as real-time analytics.