This ESG Technical Validation documents evaluation of Morphisec’s moving target defense-powered Unified Threat Prevention Platform. We focused on understanding the operational simplicity of the platform and the efficacy of its threat prevention capabilities.

The ever-increasing volume and velocity of threats has made cybersecurity one of the top IT concerns. In addition to securing the network, the on-premises infrastructure, and the cloud, IT must focus on the numerous endpoints in use. According to ESG research, organizations face myriad challenges securing their endpoints, and 55% indicate that threat prevention/detection is one of their greatest challenges, making it the second most cited challenge (see Figure 1).1 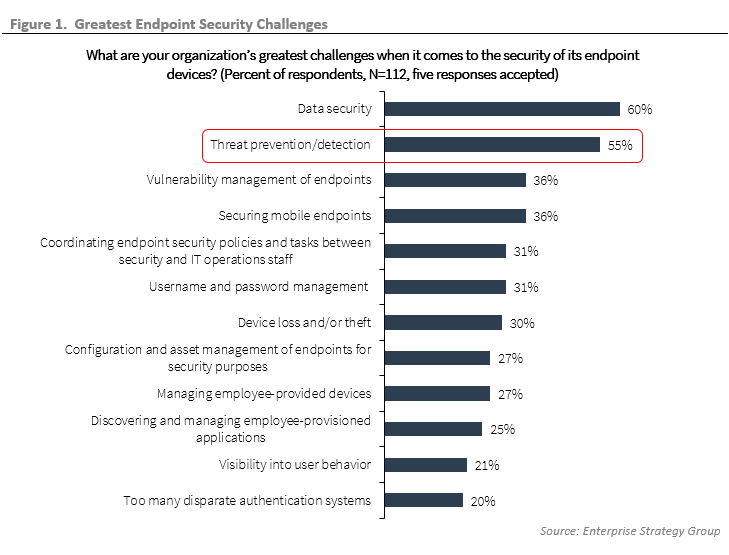 As a result, organizations evaluating their options for strengthening cybersecurity are seeking more efficient and effective tools. Indeed, according to ESG research, 46% of surveyed IT and cybersecurity decision makers ranked effectiveness as the most important consideration when investing in cybersecurity products or services.3 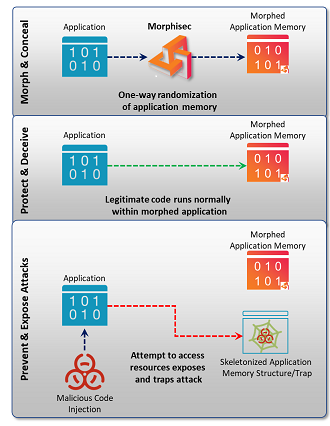 Each application instance is uniquely mutated, cloaking the application and making application memory unpredictable to attackers. Legitimate application code is updated with the morphed resources while a lightweight skeleton of the original application structure is maintained as a trap.

Morphisec’s moving target defense employs decoy technology to prevent threats without the need to first detect. As part of the application load process, Morphisec mutates the application memory, relocating internal application functions and leaving a skeletonized version in the original function locations to act as a trap. When malicious code is inserted and executed, the malicious code will attempt to use the original memory structure and will be trapped.

Thus, alerts generated when an attack is trapped are guaranteed to be the result of malicious activity and there is almost no chance of generating a false positive alert. This frees cybersecurity analysts from the onerous task of determining the veracity of alerts. Instead, cybersecurity teams can focus on root cause analysis—understanding how the malicious activity penetrated defenses to the point at which it was captured by Morphisec. Using this knowledge, cybersecurity practitioners can improve their defenses to avoid future compromise.

ESG started by launching the Morphisec web-based dashboard. As shown in Figure 2, the dashboard provides easy-to-interpret information about the state of the organization’s endpoint protection. At the top of the dashboard are tallies of the number of endpoints protected or not protected by Morphisec. Two panels provide timelines with bar charts for the number of attacks and number of protected applications (Morphisec can be configured to protect all or just a subset of applications). Two additional panels provide top-five listings for apps being protected and apps under attack. 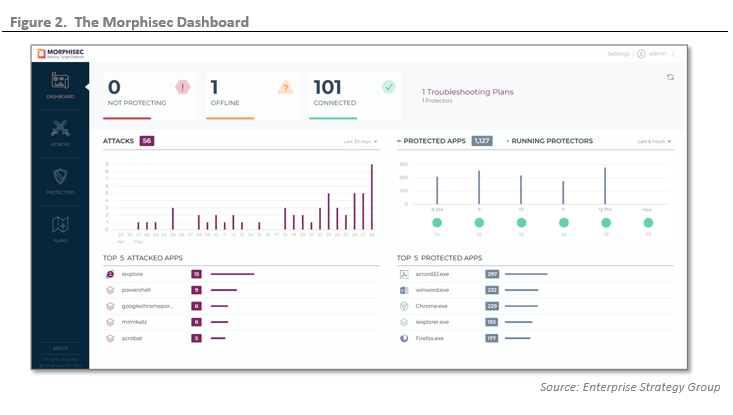 The dashboard provided us with a comprehensive understanding of the organization’s cybersecurity posture and endpoint protection. In this case, we were experiencing anywhere from zero to nine attacks per day, and Internet Explorer was the target of the majority of attacks.

Next, we selected the Protectors option from the left-side menu, which brought up the list of endpoints protected by Morphisec, as shown in Figure 3. This list provided the usual and necessary endpoint demographic information, enabling us to understand which systems were more vulnerable or less so, based on OS and the state of Morphisec running on each system. Morphisec’s protection service itself is protected and cannot be turned off or disabled without an administrator password. (The Morphisec agent on the systems at the top of the list were manually stopped for ESG’s evaluation.)

Finally, we reviewed the protection plans configured for the environment. Morphisec supports multiple protection plans that can be applied to groups of endpoints, enabling differing levels of protection based on need. By default, Morphisec protects a curated set of applications that are exposed and often threatened by malicious actors, as shown in Figure 4 and Table 1.

The list of protected applications is not exclusive—any children or related processes are also protected. Cybersecurity analysts can also configure Morphisec to protect all processes.

Organizations running older applications, such as legacy in-house developed applications, may consider those applications brittle—susceptible to breaking when even minor changes are made—and may wish to avoid having Morphisec manipulate the application’s memory. Thus, Morphisec protection can be configured via include and exclude lists of files and folders.

The critical lack of cybersecurity skills presents a challenge to organizations: How do they simply and efficiently protect their data and IT resources? A solution focused on easing the management burden is needed to ensure that cybersecurity analysts spend less time on the care and feeding of tools and more time protecting the organization.

ESG validated that Morphisec removes a significant amount of management burden. The lightweight, small-footprint Morphisec agent demonstrated exceptional efficiency, installing quickly and running only at application instance launch, which means no application performance penalty. The dashboard provided at-a-glance state and attack information, and we were quickly able to understand our endpoint cybersecurity posture and the volume and type of threats we faced. Configuring the solution was likewise rapid and simple, and we were easily able to protect the entire fleet of endpoint devices.

The advanced attack started with a phishing email directing the target user to a website. The site automatically downloaded a VBS script, which passed Defender AV scanning. The script used a variety of TTPs, including dot-net process hollowing to give the attacker a shell running on the target system. Leveraging additional TTPs, the attacker erased all traces of its presence from the system while gaining local administrator privilege, and then moved laterally to attack the domain controller, gaining domain administrator privilege.

After installing Morphisec on the target, we retried the same attack. This time, Morphisec immediately prevented the process hollowing attempt and displayed a Win10 notification. The attack failed benignly, preventing infection or damage to the system, with no interruptions in operations or impact on performance.

Next, we reviewed the alerts generated by these and other attacks in the Morphisec console by selecting Attacks from the left-side menu, as shown in Figure 5. 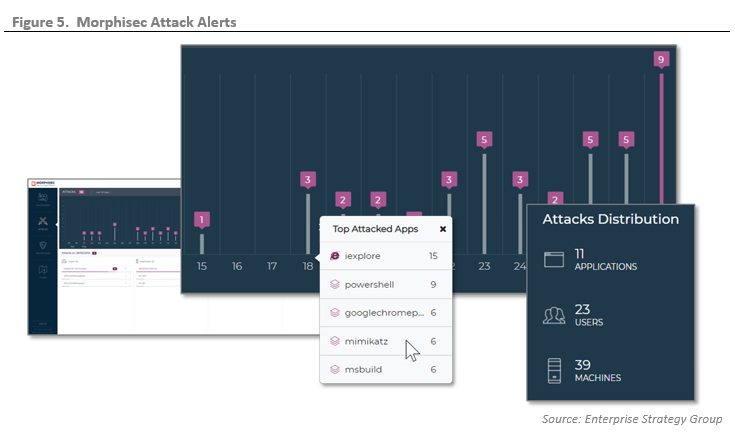 As with the dashboard, the Attack panel displays a timeline bar graph of attacks along with attack distribution statistics. In our environment, we experienced attacks across 39 endpoints, 23 users, and 11 applications. Separate panels listed the top users, endpoints, operating systems, and applications under attack. This enabled us to focus our investigatory efforts appropriately.

The screen displays attack details including name, type, description, and severity of the attack, along with the full attack trajectory, from point of origin through every stage of the attack. Selecting a stage reveals additional critical data points about that attacked process including file path, hash, integrity level, and command line instructions. Analysts can use the information, such as the command line, to understand how the attack entered and penetrated the endpoint defenses.

The process tree information shows the entire tree from initial launch to malicious code execution. For example, we were able to quickly trace malicious code from Power Shell backward to Microsoft Word and then to Microsoft Outlook. This indicated that a user received a malicious email containing a Word doc attachment. The user clicked on the attachment, executing Word, which in turn executed a macro that launched a Power Shell command.

Using this information, the analyst can develop remediation methods for unprotected and infected endpoints, as well as update network, web, email, and other security controls to prevent the malicious code from entering the environment.

Additionally, this information can be used by Morphisec to cross-correlate trends and campaigns across the 3 million endpoints under protection. 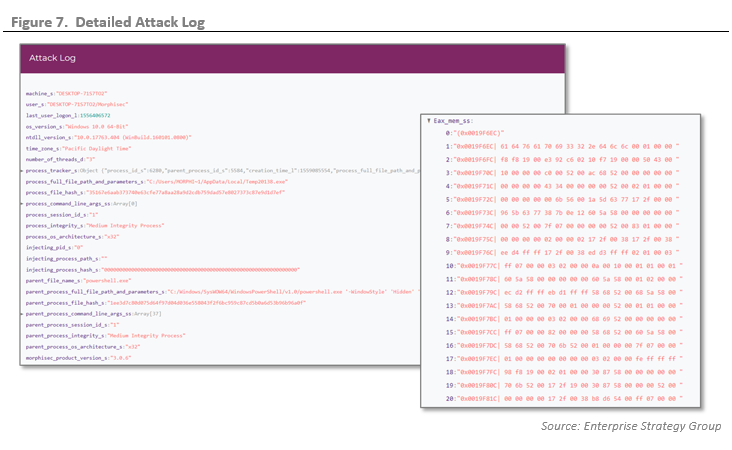 ESG observed that Morphisec’s threat prevention effectiveness reduced or eliminated the need to monitor web and network traffic for threats. Process monitoring could also be eliminated since Morphisec protected processes from buffer, integer, and stack-heap overflow and overrun; type confusion; use-after-free attacks; and other exploitation methods.

While static and runtime detection require known data to classify similar attacks, Morphisec quickly prevented unknown attacks when the attacks tripped over Morphisec traps placed in the original memory structure during the morphing process—attack detection was not necessary for prevention of the attack.

We could see from Morphisec’s attack analytics that the system captured extremely detailed forensic intelligence including the full execution stack and memory access, enabling security analysts to forensically investigate how malicious code penetrated their environment. Using this knowledge can help tighten security and prevent future compromise.

From the Morphisec console, ESG clicked on Settings on the left-side menu to bring up the configuration section. From the top tabs, we selected SIEM to select the SIEM integration configuration settings. As shown in Figure 8, we had the ability to send critical forensic information from Morphisec to the SIEM, including the attacked module, last function call, command line, parent process command line, and signatures. Sending this information to the SIEM enables cross-correlation between Morphisec’s threat detection and prevention and other security controls, helping security analysts to quickly understand what malicious code is present, how that code entered the environment, and where future infections could be prevented. 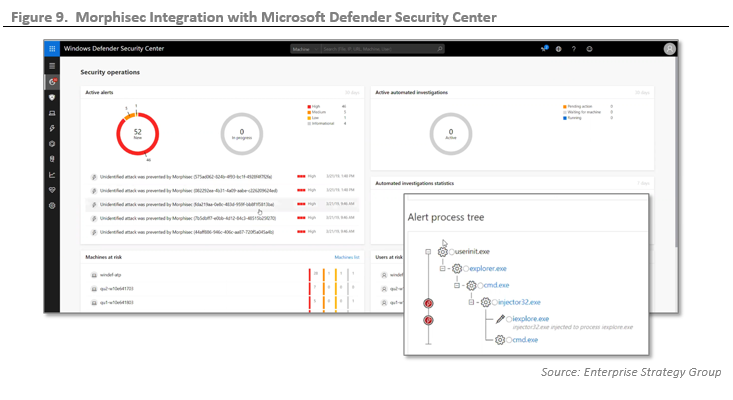 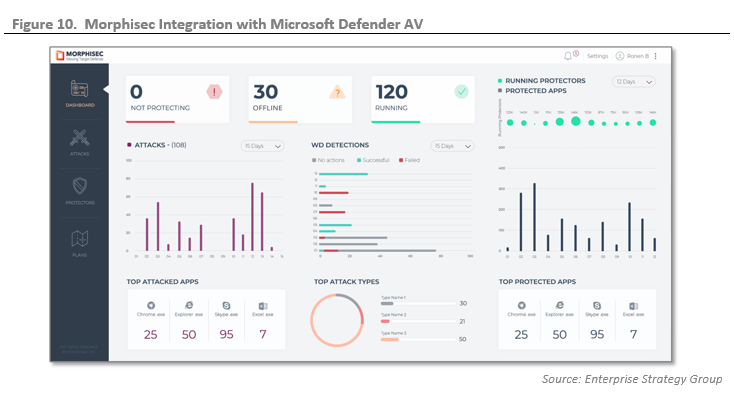 Endpoint threat prevention is only one tool in an organization’s cybersecurity toolbox, and organizations need to ensure all tools work in concert to both prevent compromise and preserve a record of activities to aid in investigations.

ESG validated that it was quick and easy to integrate Morphisec with commercial SIEM solutions, and that Morphisec provided the requisite forensic data. We also observed that Morphisec integrates with Microsoft Defender ATP. Because Morphisec has high fidelity and a low probability of false positives, Defender ATP gives Morphisec alerts more credence, ranking any alert from Morphisec high priority. Security analysts were able to start their investigation and incident response directly from the Defender console.

The traditional approach to strengthening cybersecurity is to layer on more tools to address perceived or existing weaknesses. This approach fails as it forces organizations to expend more scarce resources—time, money, effort, and, most importantly, staff—and creates an ever-more complicated environment. Instead, organizations need to focus on tools that are effective at preventing threats and have efficient implementations.

ESG’s testing showed Morphisec to be both efficient and effective when tested against a range of advanced threats in multi-stage targeted attack campaigns. Tested threat vectors included ransomware, trojans, RATS, malware, downloaders, and others targeted at endpoints, web, and email. Threats were blocked pre-execution, preventing memory infiltration and lateral movement. ESG observed that in all cases, the termination of malicious processes occurred in real time, giving operators an immediate preventative capability against unknown, fileless, and zero-day threats.

Morphisec’s management interface proved to be quick, simple, and intuitive. We were able to quickly configure and deploy Morphisec, and the platform logged a great amount of forensic data. This enabled us to investigate incidents, performing root cause analysis of how malicious code entered the environment, and placing controls to prevent future compromise.