The ever-increasing volume and velocity of threats has made cybersecurity one of the top IT concerns. However, IT’s drive to improve the business’ security posture is complicated by the global cybersecurity skills shortage. As a result, organizations evaluating their options for strengthening cybersecurity are seeking more efficient and effective tools. Indeed, according to ESG research, 46% of surveyed IT and cybersecurity decision makers ranked effectiveness as the most important consideration when investing in cybersecurity products or services—by far the most often cited consideration.2 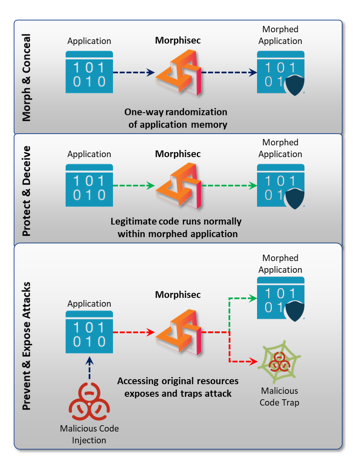 Morphisec designed its platform to prevent fileless, zero-day exploits and evasive malware at the earliest stage of attack without the need for IOCs. Using a lightweight, small-footprint agent that deploys into existing security infrastructure, Morphisec blocks threats pre-execution, preventing damage and lateral movement.

Each application instance is uniquely mutated, cloaking the application and making application memory unpredictable to attackers. Legitimate application code is updated with the location of its resources while a lightweight skeleton of the original application structure is maintained as a trap.

ESG validated Morphisec’s capabilities and we were impressed with Morphisec’s ability to instantly prevent a broad range of network, email, web, and physical threats without impacting performance.

The traditional approach to strengthening cybersecurity is to layer on more tools to address perceived or existing weaknesses. This approach fails as it forces organizations to expend more scarce resources—time, money, effort, and, most importantly, staff—and creates an ever-more complicated environment. Instead, organizations need to focus on tools that are effective at preventing threats and have efficient implementations.

ESG’s testing showed Morphisec to be both efficient and effective when tested against a range of advanced threats in multi-stage targeted attack campaigns. Tested threat vectors included ransomware, trojans, RATS, malware, downloaders, and others targeted at endpoints, web, and email. Threats were blocked pre-execution, preventing memory infiltration and lateral movement. ESG observed that in all cases the termination of malicious processes occurred in real time giving operators an immediate preventative capability against unknown, fileless, and zero-day threats.