IT is growing more demanding every year, driven by increasing amounts of data, applications, devices, and users, as well as digital transformation initiatives. Organizations are turning to cloud infrastructure to meet these demands. Indeed, according to ESG research, four-fifths (81%) of organizations say that they use or plan to use infrastructure-as-a-service (IaaS).1

Organizations need an IaaS stack that provides computational power for data analysis with network performance for access to large volumes of data. High network throughput and low latency enable organizations to leverage even the largest and most complex AI models and data lakes.

Testing used open source and Linux tools to measure network throughput, latency, and packet rates. Testing did not use local storage and did not consume either the available memory or CPU. Thus, differences in the number of vCPUs, the amount of memory, or the amount or type of local storage did not affect the results.

To ensure the results replicated real customer experiences, testing was conducted at random times every two to four days over a six-month period from May through October 2019. Testing was automated using each IaaS provider’s API, and servers were programmatically instantiated. The Amazon EC2 instances were tested using both Amazon Linux AMI release 2018.03 and Ubuntu 16.04.6 LTS. Both Vendor X and Vendor Y were tested using Ubuntu 16.04.6 LTS.

ESG measured network throughput using iperf2, an open source software tool designed to help users measure and tune network performance. Iperf2 has both client and server functionality and can create data streams to measure throughput between the two ends of a connection in either or both directions. Iperf2 parameters are shown in Table 1. All other iperf2 and operating system parameters were set to the default values.

Throughput measurements are shown in a box-and-whisker plot (boxplot), a standardized method for displaying the distribution of data based on a five-number summary. The minimum and maximum values are shown with the whiskers. The median, or middle value, of the data is shown by the line between the two boxes. The first quartile (25th percentile) is the middle number between the smallest number and the median and is represented by the lower edge of the lower box. The third quartile is the middle value between the median and the highest value and is represented by the upper edge of the upper box. The size and location of the boxes indicates whether the data is symmetrical, skewed, or tightly grouped.

Throughput measurements are shown in Figure 3, and are summarized in Table 2. Amazon EC2 C5n instances achieved a median throughput of 90 Gbps, moving three times as much data as Vendor X (30 Gbps) or Vendor Y (28 Gbps). 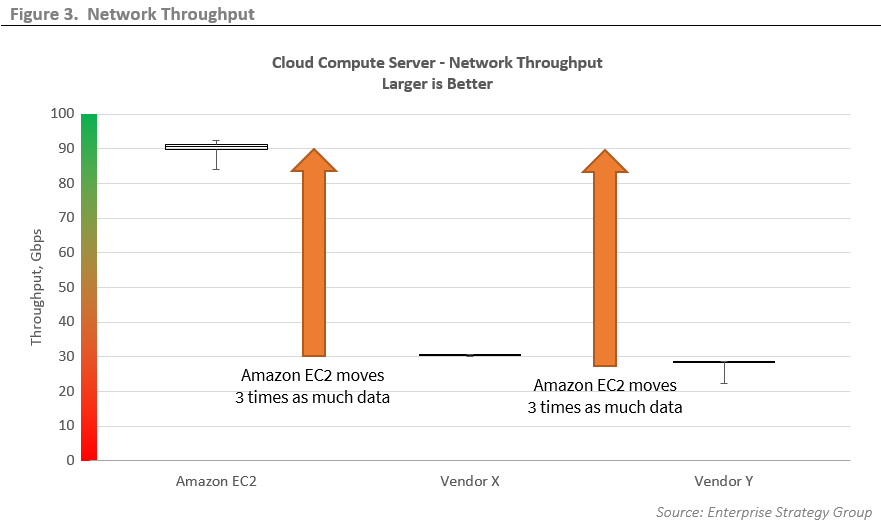 IaaS makes it possible for organizations to leverage the scale and economics of the solution providers—but if that scale hinders data throughput, analyses may be delayed, and business insights and decision making may suffer. Thus, cloud compute servers need to meet and exceed application compute power and network throughput requirements.

ESG validated that over six months of testing, Amazon EC2 C5n instances achieved a median of 90 Gbps network throughput, moving three times as much data as comparable solutions. Amazon EC2 network throughput was consistent, ranging from 84 to 92 Gbps (6.7% below the median to 2.1% above the median). Large and consistent throughput enables organizations to deploy HPC, AI, and data analysis applications in the cloud, leveraging cloud scale and economics to achieve faster insights.

ESG measured network latency using qperf, an open source software tool available in standard Linux distributions. Qperf was designed to help users measure and tune network performance. Qperf has both client and server functionality and can create data streams to measure latency between the two ends of a connection in either or both directions. Qperf parameters are shown in Table 3. All other qperf and operating system parameters were set to the default values.

As with network throughput, latency measurements are shown in a box-and-whisker plot (boxplot).

For Vendor Y, ESG recorded multiple measurements of latency over 50 μs and measured a maximum latency of 506.40 μs. Displaying the maximum recorded value on the boxplot would make the graph unreadable. Therefore, the boxplot displays data for latency between 20 and 50 μs. 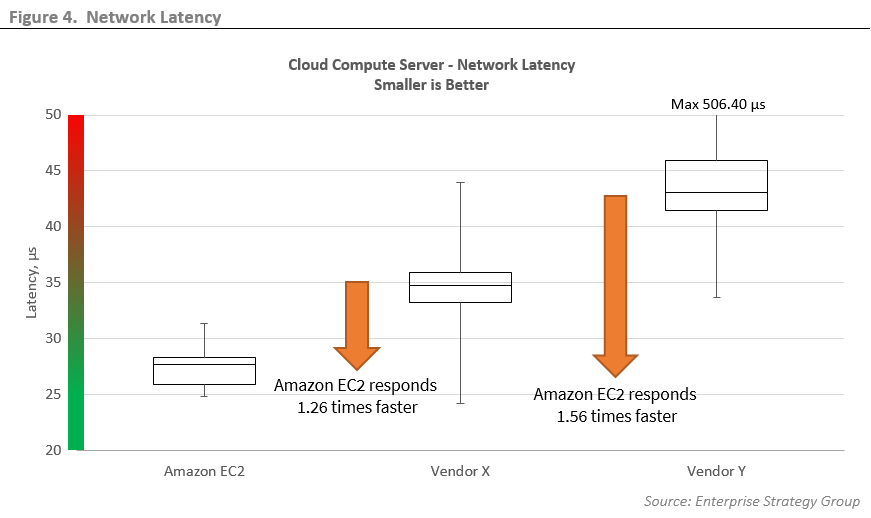 ESG validated that over six months of testing, Amazon EC2 C5n instances achieved a median network latency of 27.66 μs, 26% to 56% faster than comparable solutions. Amazon EC2 network latency was consistent, ranging from 24.82 μs (10.3% below the median) to 29.66 μs (7.2% above the median). Fast and consistent latency enables applications to keep data pipelines full and CPUs working rather than idling waiting for data. These results validate that Amazon EC2 C5n instances are well suited for HPC, AI, data analytics, and other applications that require fast response to data requests.

ESG measured packet rates using iperf2 with the parameters shown in Table 5. All other iperf2 and operating system parameters were set to the default values.

As with network throughput and latency, packet rate measurements are shown in a box-and-whisker plot (boxplot).

ESG validated that over six months of testing, Amazon EC2 C5n instances achieved a median of over 5 million 96-byte packets per second, four to ten times faster than comparable solutions. Amazon EC2 packet rates ranged from 4.2 million to 6.9 million packets/sec, and packet rates were consistent with 50% of the measurements ranging from 5% below to 5% above the median. Applications can depend on Amazon EC2 C5n instances for fast and consistent data transfers.

The testing used in this report attempted to replicate customer experiences, using customer-available instances and industry-standard benchmarking tools deployed in a controlled environment. However, IaaS vendors practice continuous improvement, and new compute server instance types may provide different results. Due to the many variables in each IaaS solution, performance planning and testing with your own applications and environment are recommended. Readers are well advised to always explore the details behind any vendor testing to understand the relevance to your environment.

Competition drives enterprises today to ever-higher levels of performance for analytics, HPC, AI, and transaction-oriented workloads. But IT must always make a tradeoff between performance and cost, even with technology innovations like cloud-based compute servers. If your organization needs consistent and predictable high-performance low-latency data transfers for business-critical data-intensive workloads, Amazon EC2 is worth a hard look.