ESG Lab evaluated Western Digital NVMe flash solutions with Supermicro servers for VMware vSAN hyperconverged infrastructure for business-critical applications and databases, with a focus on assessing the performance and value of NVMe-based flash for infrastructure-wide storage virtualization and hyperconverged solutions in the data center.

Do More with Less

ESG recently conducted a survey of 356 IT professionals, and respondents were asked to identify the most important message they could hear from storage vendors. As shown in Figure 1, IT organizations are significantly focused on both capital and operating cost reduction, as well as performance.1 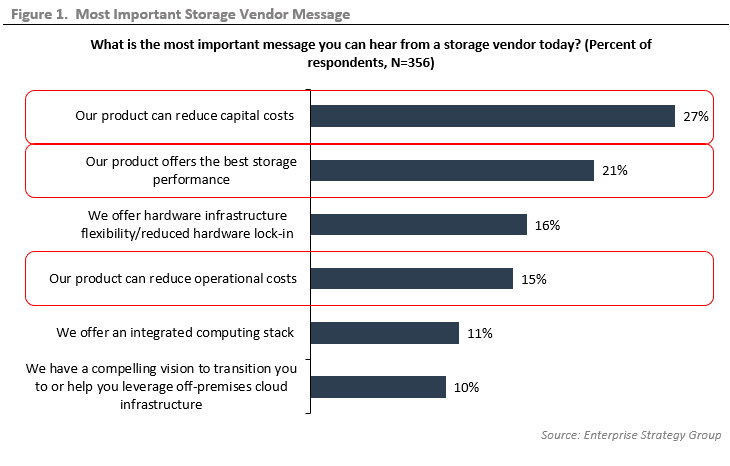 What’s driving this focus on cost and performance in storage infrastructure? As organizations of all sizes embrace digital transformation and the shift to modern cloud architectures, the infrastructure is both growing and becoming more complex. Two-thirds (68%) of respondents to a different ESG research survey said that their IT environment had become more complex in the last two years. Respondents indicated that this complexity was a result of many factors, including higher data volumes, the increase in the number and type of endpoint devices, the increase in the number and type of applications used by employees, the use of both on-premises and cloud data centers, and the increase in the number of users.2

However, IT budgets aren’t keeping pace with this growth and complexity, and organizations continue to give their IT staff the mandate to “do more with less.”

VMware vSAN is a software-based storage solution for VMware hyperconverged solutions. Embedded in the hypervisor and leveraging industry-standard servers, vSAN delivers flash-optimized, high-performance compute and storage for hyperconverged infrastructures.3 vSAN provides easy scalability and seamless integration with the entire VMware stack, including VMware vSphere, making it a simple storage platform for virtual machines and ideal for business-critical applications, virtual desktops, IT operations, or remote IT applications. The solution scales from two to 64 nodes, and aggregates locally attached storage into virtual data stores available to any VM in the hyperconverged cluster (see Figure 2).

The Western Digital Ultrastar DC SN620 family features a native PCIe Gen 3, x4 interface and NVMe 1.2 compliance with in-box driver support and a comprehensive set of features making them ideal to integrate with existing infrastructures. The Ultrastar DC SN620 family includes Western Digital’s Guardian Technology Platform for improved flash endurance and data integrity protection. The SSDs provide performance, endurance, reliability, and affordability in a single package. Western Digital optimized the Ultrastar DC SN620 for mixed-use application workloads such as databases and online transaction processing (OLTP), email, virtual desktop, and collaboration where performance and high availability are required. Ultrastar DC SN620 NVMe SSDs typically draw less than half the power required for performance SSDs and provide up to 250,000 IOPS random read and up to 47,000 IOPS random write performance, with up to 1,700MiB/s read and up to 1,200MiB/s write speeds. Available in capacities of 1.6 TB-3.84 TB5 , Ultrastar DC SN620 SSDs provide enterprise-class endurance, with up to 1.7 drive writes per day for five years.

The Supermicro BigTwin is a multi-node system supporting high-performance processors, memory, storage, and I/O in a 2U form factor. As an integrated solution, the BigTwin supports dual-processor compute nodes, hot-swap NVMe drives, and configurable I/O. Environments deploying the BigTwin benefit from: 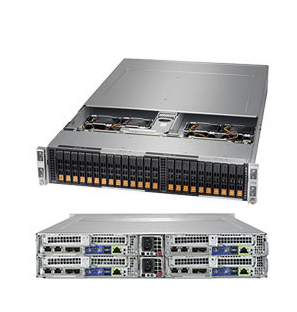 ESG Lab performed hands-on evaluation and testing of an SSD-based VMware vSAN at Western Digital’s facilities. Testing was designed to demonstrate performance and cost-efficiency using industry-standard tools and methodologies. Results were analyzed and compared between the SAS and NVMe vSAN configurations.

Figure 3 illustrates the test bed used by ESG Lab for this validation report. The test bed represents a common configuration for VMware vSAN, and includes four nodes, each running VMware vSAN, which aggregated all storage resources into a single virtual data store.6 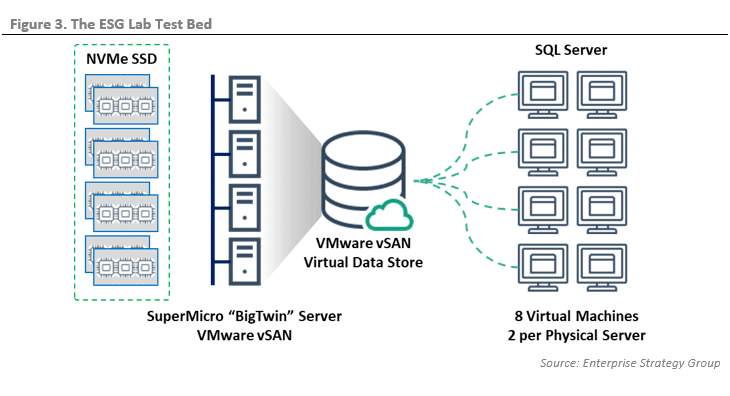 For the SAS configuration, tested earlier on a different hardware platform7 , each physical node was configured with six drives, split into two disk groups of three drives each. Each disk group was composed of two 4TB Optimus Max SAS SSDs for storage capacity, and one 800GB Optimus Ascend SAS SSD for write acceleration.

Twelve virtual machines, two per physical server, were running Microsoft Windows Server 2016 and Microsoft SQL Server 2016. Each VM was configured to have 16 virtual CPUs and 96 GB of RAM.

The workload itself emulated the database activity of users in a typical online brokerage firm as they generated trades, performed account inquiries, and executed market research. The workload was composed of ten transaction types with a defined ratio of execution. Four of the transactions performed database updates, and the rest were read only.

Each of the twelve VMs was configured for 5,000 HammerDB warehouses. Twelve separate HammerDB instances, outside the vSAN cluster, acted as workload generators, and each instance was configured with 256 users, for 3,072 total users. ESG Lab started the test with a five-minute ramp to reach steady state operations. Once steady state was achieved, the test ran for 30 minutes.

The performance of the system, measured in the number of new orders per minute entered into the database (NOPM), is shown in Figure 4. 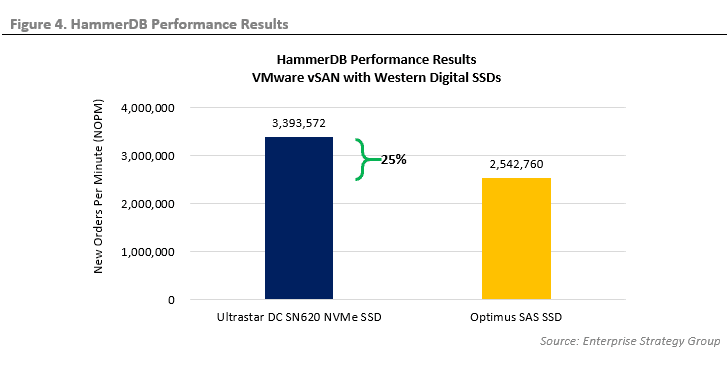 We observed maximum performance for the NVMe configuration with 12 VMs and 2,072 users, with an average of almost 283,000 NOPM per VM. While the SAS solution was able to sustain a slightly higher average NOPM per VM, the NVMe solution sustained significantly more total NOPM and VMs using the same number of SSDs. This indicates that the NVMe SSDs provide more performance per drive, and the same number of drives can support 50% more clients. The results are shown in Figure 5. 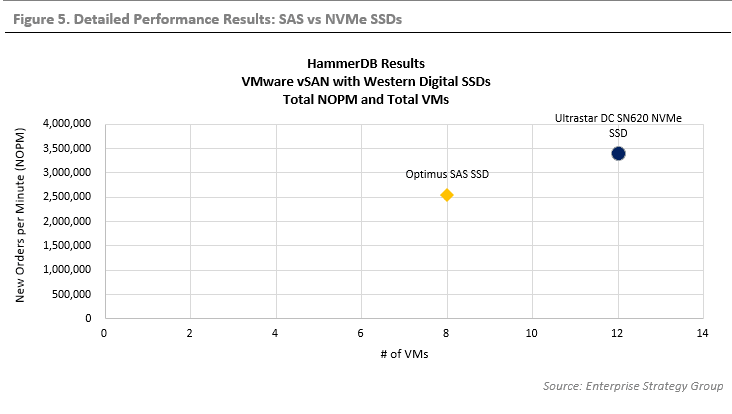 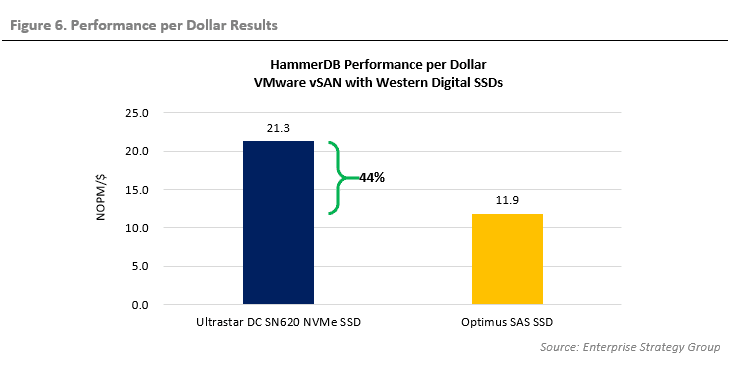 ESG Lab confirmed that a VMware vSAN cluster with Western Digital SSDs easily accommodated the performance requirements of an enterprise-class virtualized OLTP database environment. Performance was excellent for a SAS configuration, while the NVMe configuration delivered 25% better performance. The NVMe solution was able to support 50% more clients with the same number of drives, highlighting the performance advantage of NVMe.

Digital transformation, the shift to cloud architectures, and the ever-increasing volume and velocity of data are putting increasing demands on IT infrastructures. As a result, IT professionals face multiple storage system challenges—data protection, rapid data growth rates, management and optimization, and performance—while struggling to meet the omni-present mandate of doing more with less.

The VMware vSAN solution with Western Digital SSDs and Supermicro servers enables IT organizations to simplify all aspects of their operations. The physical resources are aggregated into an efficient, high-density cluster. Each node becomes a simple building block to easily scale up and scale out with the business. The distributed-everything architecture leverages a software-defined approach that aggregates all storage resources across the cluster and offers all the storage services that users have come to expect in enterprise infrastructure environments. And for enhanced performance, higher endurance (>1DW/D) Ultrastar DC SN620 NVMe SSDs deliver write acceleration while lower endurance (<1DW/D) Ultrastar DC SN620 NVMe SSDs add storage capacity.

Performance testing showed the advantages of Western Digital NVMe SSDs in a real-world, virtualized OLTP database workload. The SAS-based solution delivered 2,542,760 new orders per minute from a four-node VMware vSAN cluster, while the NVMe-based solution delivered 3,393,572 new orders per minute, a 25% improvement. Using the NVMe SSDs enabled vSAN to support 50% more clients with 25% better performance using the same number of SSDs. And with cost as a major driver behind the adoption of hyperconverged technologies, ESG Lab was impressed with the potential reduction in TCO that the VMware vSAN with Western Digital NVMe SSDs can bring to organizations. The NVMe solution cost 26% less and delivered 25% better performance, resulting in a 44% advantage in performance per dollar.8

1. Source: ESG Master Survey Results, 2017 General Storage Trends, November 2017.↩
2. Source: ESG Master Survey Results, 2018 IT Spending Intentions Survey, December 2017.↩
3. A hyperconverged infrastructure is largely software-defined, with tightly integrated compute, storage, networking, and virtualization resources.↩
4. Both the SanDisk Optimus series and the Western Digital Ultrastar DC SN620 (previously known as SanDisk Skyhawk) series of SSDs used in these solutions are certified for VMware vSAN and are listed on the VMware HCL.↩
5. One terabyte (TB) is equal to 1,000GB (one trillion bytes) when referring to solid-state capacity. Accessible capacity will vary from the stated capacity due to formatting and partitioning of the drive, operating software, and other factors.↩
6. Detailed configuration information is provided in the Appendix.↩
7. Source: ESG Lab Validation, Optimize VMware Virtual SAN 6 with Western Digital SSDs, April 2016.↩
8. The test results presented in this report are based on a test bed deployed in a controlled environment with industry-standard testing tools. Due to the many variables in each production data center environment, capacity planning and testing in your own environment are recommended.↩
This ESG Lab Report was commissioned by Western Digital and is distributed under license from ESG.

The goal of ESG Validation reports is to educate IT professionals about information technology solutions for companies of all types and sizes. ESG Validation reports are not meant to replace the evaluation process that should be conducted before making purchasing decisions, but rather to provide insight into these emerging technologies. Our objectives are to explore some of the more valuable features and functions of IT solutions, show how they can be used to solve real customer problems, and identify any areas needing improvement. The ESG Validation Team’s expert third-party perspective is based on our own hands-on testing as well as on interviews with customers who use these products in production environments.