This report documents ESG’s validation of Veritas NetBackup Flex Scale, a scale-out, hyperconverged data protection platform, with a focus on ease of use, scalability, and performance.

While technology innovations are transforming IT in positive ways, organizations continue to struggle as IT becomes more complex. According to recent ESG research, 75% of survey respondents reported that their IT environments are more complex than two years ago.1 Further complicating IT is the trend toward having more generalists on the IT staff handling a range of tasks, rather than experts dedicated to specific areas like data protection.

Storing and protecting the continually growing amounts of data also increase stress on both infrastructure and staff. According to recent ESG research, more than half (53%) of survey respondents reported having more than 500 TB of backup data (with 11% reporting having 10 PB or more), and 67% reported that backup data volumes were growing more than 20% annually (with 32% reporting that they were growing more than 50% annually).2 Protecting this data is a critical assignment in today’s world in which organizations depend on highly available applications and data. These realities have led to serious challenges for data protection. 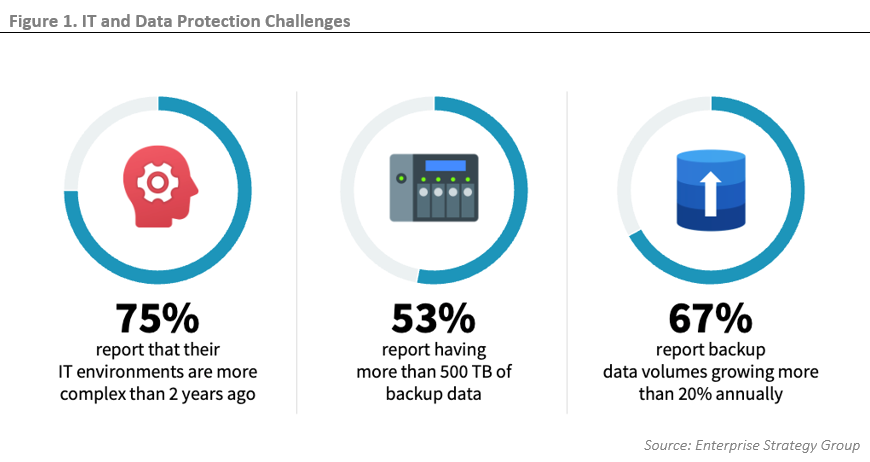 To meet these complexity and growth challenges for a range of modern workloads, organizations need rock-solid data protection solutions that are simple to deploy and manage, highly scalable, high performing, and automated to relieve IT staff from management tasks.

A private UDP network with two 25Gbps ports connects the nodes in the cluster, providing more bandwidth and performance than TCP.

There are numerous features and automations built into NetBackup Flex Scale that contribute to its ease of management.

NetBackup Flex Scale also enables instant access to VMs so that organizations can resume operations quickly when critically needed without having to wait for the data to be restored.

ESG viewed several demos that showed how easy it is to deploy and scale NetBackup Flex Scale; its resiliency and ability to continue backup jobs during multiple node failures; and its automatic rebalancing of data when nodes are swapped out or added. We also viewed validated results that show NetBackup Flex Scale’s enterprise performance and scalability.

Ease of Deployment and Scaling

ESG viewed demos showing the simplicity and speed of deploying NetBackup Flex Scale, which can be done with the set-up wizard or API; a YAML file can be used to reduce manual entry errors. IT administrators only rack, cable, and power on the hardware; the software is pre-loaded. They log in and use the cluster set-up wizard to add a few details, which takes less than five minutes; then the software automatically completes all the configuration on its own.

The deployment began with a four-node cluster, racked, cabled, and powered on. First, we logged into one of the NetBackup Flex Scale nodes and added an IP address to configure the management port; from here, a connection was made to a built-in webserver to complete the cluster configuration. After logging into the NetBackup Flex Scale application and viewing prerequisites, the five-step cluster set-up wizard appeared.

In less than five minutes, all five steps were completed (with a green check mark indicating completion); we simply clicked Install Configuration, and NetBackup Flex Scale completed all node, network, and NetBackup configurations on its own. This included setting up the clustered file system, spinning up NetBackup media and master service containers, configuring the storage unit, creating catalog protection policies and snapshot schedules, and setting up Autosupport. Progress was tracked graphically, and we could view details at any time with a single click. In this example, the automated process was completed in about an hour and a quarter.

Finally, we logged into NetBackup, showing the already configured storage unit created from the disks in the cluster for storing local backups. Now, we were ready to discover assets and create workload protection plans using NetBackup. Figure 4 shows the deployment progress graphic, details of tasks completed, and the NetBackup welcome screen. 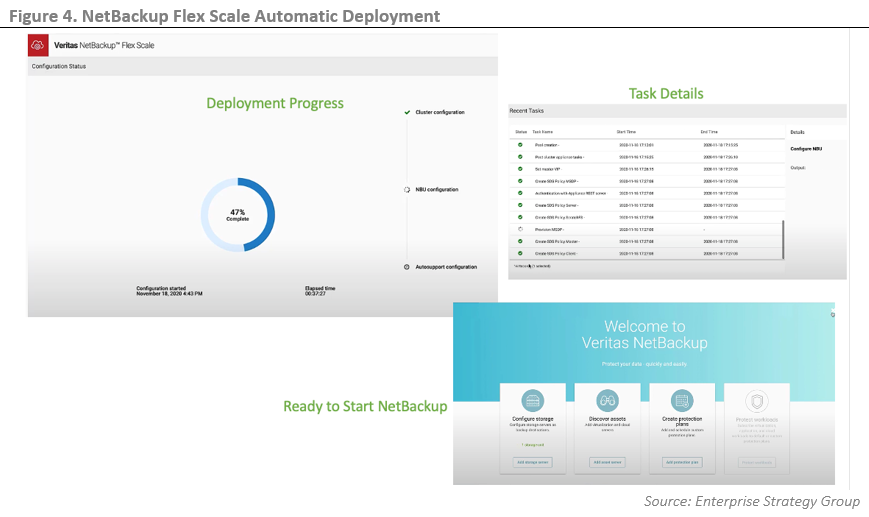 ESG also viewed demonstrations of how easy it is to add and replace nodes in a NetBackup Flex Scale cluster. Administrators can add nodes individually or in groups. Each node includes the complete hardware and software pre-installed. With a four-node cluster running numerous NetBackup jobs, we watched as a new node was powered on and was then automatically discovered by NetBackup Flex Scale. We selected the new node and clicked Add nodes to the cluster. NetBackup Flex Scale then displayed the before and after details, including the number of nodes and TBs of capacity.

We added the node name and the names and IP addresses of the data, management, and optional IPMI networks, and the reconfiguration began automatically. NetBackup Flex Scale then added the node, configured its software and network, scaled the clustered file system, and rebalanced data across all nodes.

Once this process was complete, NetBackup Flex Scale began intelligently balancing NetBackup jobs across the expanded cluster, with no changes to policy or client configurations. Figure 5 shows the node addition and data rebalancing in process.

ESG validated that NetBackup Flex Scale, with its containerized, hyperconverged, scale-out architecture, offers simple, automated deployment and scalability. Using the easy set-up wizard, deployment took less than five minutes of administrator time, after which NetBackup Flex Scale completed the installation on its own. Adding nodes to the cluster was equally easy, requiring just a few clicks. NetBackup Flex Scale automatically added the nodes, scaled the clustered file system, and rebalanced data across the expanded cluster, with no changes to policies or clients.

ESG viewed multiple demos showing the continuation of backup jobs during disk failures, as well as the intelligent resumption of NetBackup services.

We began with a five-node cluster. Drilling into the Infrastructure tab, we could see one failed disk on one node, plus a failed node (showing all its disks offline). All data remained intact, and when we viewed the NetBackup job screen (see Figure 6), all jobs were continuing to run uninterrupted.

In addition, we added a node after a failure. Once the new node was connected to the network, we selected the failed node and clicked Replace Node. After we selected the workload priority option, NetBackup Flex Scale was able to rebuild the data from the failed node using the erasure-coded fragments striped across the rest of the cluster, rebuilding that data quickly. Next, on the new node, NetBackup Flex Scale automatically re-created the configuration from the failed node and spun up NetBackup services as needed. Once that was complete, the intelligent load balancer began re-optimizing data across the available resources.

It is important to note that the containerization of services makes it very easy and fast to recover from failures. If the load-balancing or master service container had been on the failed node, it would have been created again on another node automatically. No data migration, manual reconfiguration, changes on the client side, or professional services are needed; NetBackup Flex Scale handles it alone.

ESG audited Veritas performance testing focused on backup and restore performance. The test bed included 10 RHEL clients backing up over 25 GbE to 4-8 standard NetBackup Flex Scale nodes. Veritas’ Gendata tool was used to send increasing streams of 30 GB, 60GB, and 100GB files with varying deduplication rates. Testing with additional nodes was conducted, but due to lack of sufficient servers to exhaust the cluster, the 10-16-node results were extrapolated. 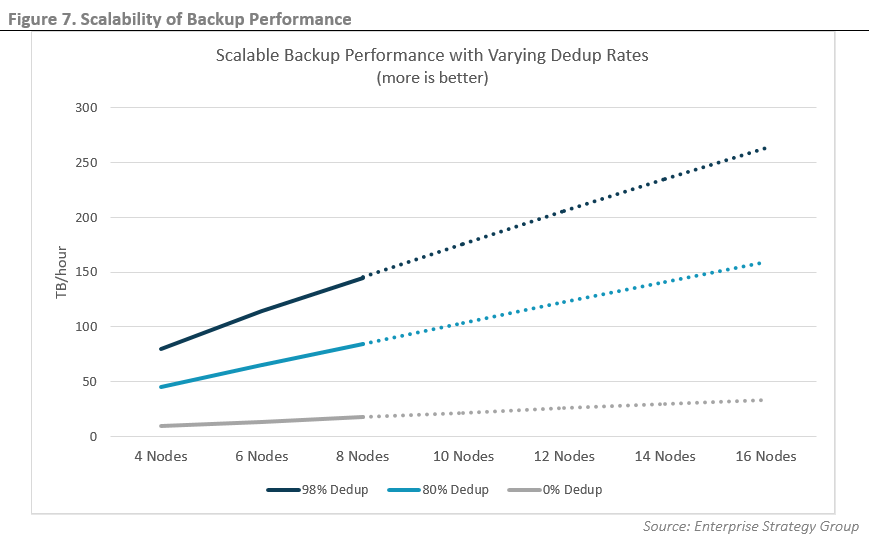 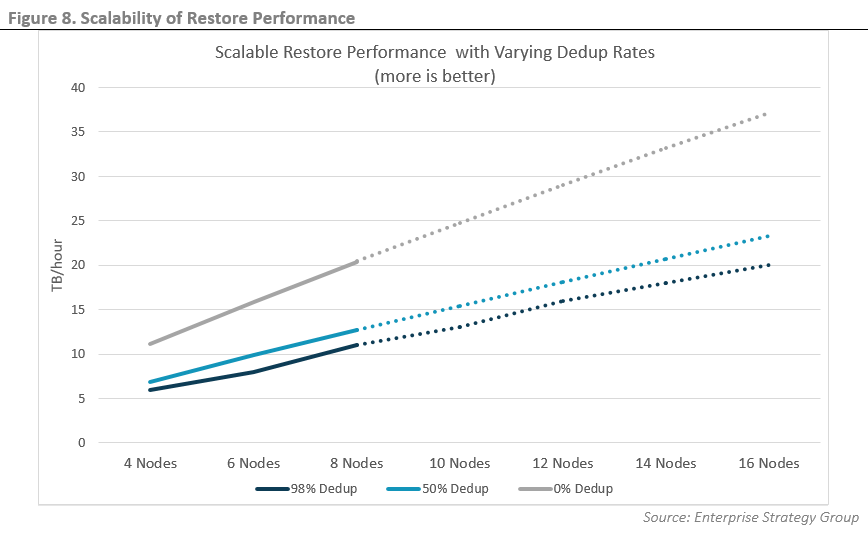 ESG also reviewed performance related to instant access virtual machines. With instant access, organizations can start up VMs on NetBackup Flex Scale to get back in operation immediately, instead of waiting for the restore to take place. This is an important feature for critical production VMs. 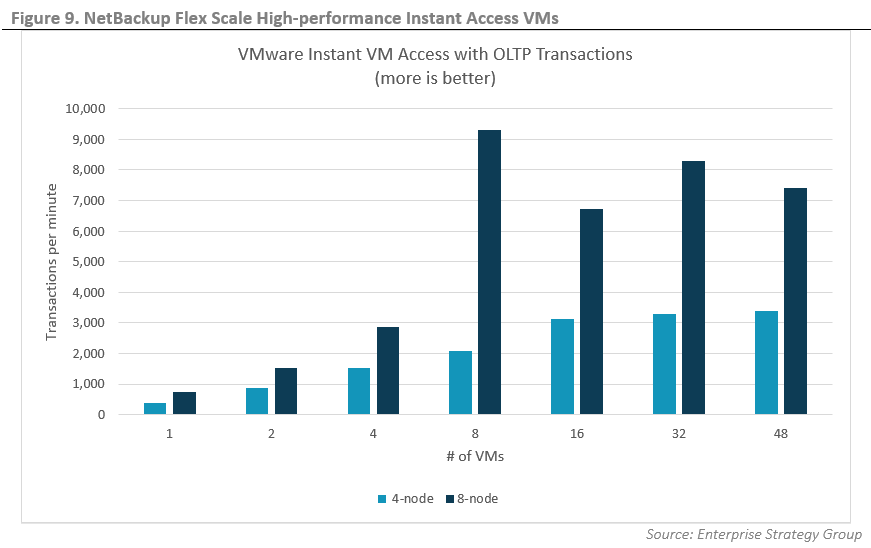 Simplicity and automation are important features in a growing environment, but a data protection solution also must deliver backup and restore performance at scale to keep applications both protected and available.

Veritas NetBackup has a long history of not only delivering rock-solid data protection, but also implementing changes along the way to optimally serve customers. With more than 800 workloads supported, NetBackup is a leader in the industry. The latest incarnation of NetBackup is NetBackup Flex Scale, a scale-out, hyperconverged appliance with all NetBackup services containerized using Docker. It is focused on simplicity and automation for all tasks, including backup, restore, and scale.

NetBackup Flex Scale automatically scales with each node addition, adding deduplicated storage capacity and increasing catalog capacity and NetBackup services, all without intervention. The intelligent load balancer ensures resource optimization across the cluster. If a node fails, the required services are automatically transferred to other nodes, and business continues uninterrupted. Erasure coding provides high availability, and reliability increases as nodes are added.


Currently, the HPE ProLiant hardware is the only validated platform for NetBackup Flex Scale, offering high reliability and scale.

1. Source: ESG Research Report, 2021 Technology Spending Intentions Survey, January 2021.↩
2. Source: ESG Research Report, Tape’s Place in an Increasingly Cloud-based IT Landscape, January 2021.↩
3. It should be noted running these tests with additional threads is likely to increase the number of instant access VMs that can be supported. This was not possible in the test bed that was used.↩
This ESG Technical Validation was commissioned by Veritas and is distributed under license from ESG.